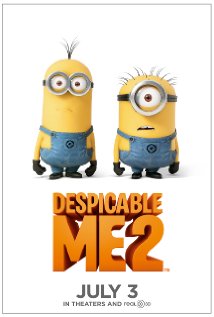 DESPICABLE ME 2 is another hilarious, heartfelt outing with Gru, his adorable adopted daughters, and their little, yellow minion helpers. A new villain has stolen a new secret formula that converts sweet little animals into horrible monsters. A secret international organization can’t stop the new villain, so they recruit Gru. After all, who can stop a villain better than another villain? Somone kidnaps Gru’s minions and starts to inject them with the formula, turning them into monsters. However, a problem with his eldest daughter and a new love interest distract Gru. Can Gru rescue the minions? Will he ever settle down?

DESPICABLE ME 2 is laugh-out-loud funny. Yet, it has incredible cuteness and heart. Every form of villainy is refuted, family is affirmed, doing the right thing is affirmed, and good triumphs. There are many good things to say about DESPICABLE ME 2. However, there’s cartoon upper body nudity when the villain shows off his hairy chest, and there’s a fart gun. These are typical Loony Toon funny moments that they are transcended by the good values, heart, soul in DESPICABLE ME 2.

(BBB, C, VV, N, M) Very strong moral worldview about doing the right thing, caring for others, protecting your family, being loyal, standing for the truth, protecting your children, and some Christian, redemptive elements like self-sacrifice and the little minions sing uplifting songs in their strange minion language; no foul language, but there is a passing gas gun; comical action violence with a lot of pratfalls and some scary scenes for children, one kick to the private parts, and cartoon scary situations; no implied or depicted sexual content or immorality, but some comical innuendoes such as fairy princess actress fails to show up at birthday party so the father has to pretend to be the fairy princess and adorable Agnes says, “I know you’re Gru, but I’m pretending so everybody will have fun,” asexual minions wear many different costumes, including coconut shell brassieres, grass skirts, maid outfits, one minion falls head over heels for the female super-agent teaming up with Gru named Lucy, and Gru imagines himself on a desert island with Lucy kissing her; cartoon upper male nudity on villain who is the most macho villain of all time; no alcohol; no smoking or illegal drugs but the plot problem is a formula transforms you into a monster and its antidote is a jelly formula; and, minions make mistakes, including Three Stooges type slapstick, wanting to be bad, one character wants to be bad, but everything ends well and bad behavior is rebuked.

DESPICABLE ME 2 is one of the funniest, laugh-out-loud, hilarious, best conceived, well-plotted, most enjoyable movies ever. Good triumphs in the end. To get there, Gru and his companions make some silly mistakes that make for some brilliant comedy.

Gru, a reformed bad guy, has decided he loves his three adopted daughters, and he’s going to try to go straight by making jellies and jams. Things are just not working out, however. The jellies and jams, however, are awful. Dr. Nefario can’t stand being good and gets another offer to join another villain. Even worse, there’s a new villain who stole an entire arctic laboratory where a new formula converts sweet little animals into horrible monsters.

A top secret international organization can’t stop the new villain, so they decide to recruit Gru. After all, who can stop a villain better than another villain? The MI-6 type organization is called the Anti-Villain League or AVL. They send one of their new agents, Lucy, to recruit Gru. Lucy, like Lucille Ball in I LOVE LUCY, is excessive in all her aspects of being a cunning secret agent. She drops Gru with a lipstick taser, hauls him off in her submarine car to an underwater facility run by AVL’s leader, Mr. Ramsbottom, whom Gru calls Sheepsbottom.

After a birthday party for Agnes goes wrong, where Gru is embarrassed that he must dress up as a fairy princess because the actress he hired failed to show, Gru decides to join AVL. Lucy and Gru stake out the Paradise Mall by starting a bake shop. Every character in the mall is a potential villain, but Gru gets a glimpse of one of them and believes he may be El Macho, the most macho villain of all time, who everyone thought was dead years ago.

The plot thickens when: someone kidnaps Gru’s minions and starts to inject them with the formula, turning them into monsters; Gru gets distracted from his mission because his oldest daughter, Margo, falls in love with the owner of the salsa shop’s son; and, Lucy and Gru, who started hating each other, develop an attraction to one another.

Can Gru rescue the minions? Will he ever settle down and get married?

DESPICABLE ME 2 is laugh-out-loud funny. Yet, it has incredible cuteness and heart. Every form of villainy is refuted, family is affirmed, doing the right thing is affirmed, and good triumphs over evil. The three little girls Margo, Edith, and Agnes are delightful. They are the most real cartoon girls ever imagined. The minions break out in song, which is intelligibly unintelligible. Some of the songs are big hits translated into minion language.

There are too many good things to say about DESPICABLE ME 2. However, it should be noted there’s cartoon upper body nudity when El Macho shows off his hairy chest and the minions where various costumes, and there’s a fart gun. These are typical Loony Toon funny moments that are transcended by all the good values and the heart and soul of the movie.

DESPICABLE ME 2 would be five, six, seven, or eight stars if MOVIEGUIDE(r) ratings went that high. Little children may find some of it scary, but ages five and up will find it delightful.

Rent or Buy DESPICABLE ME 2: