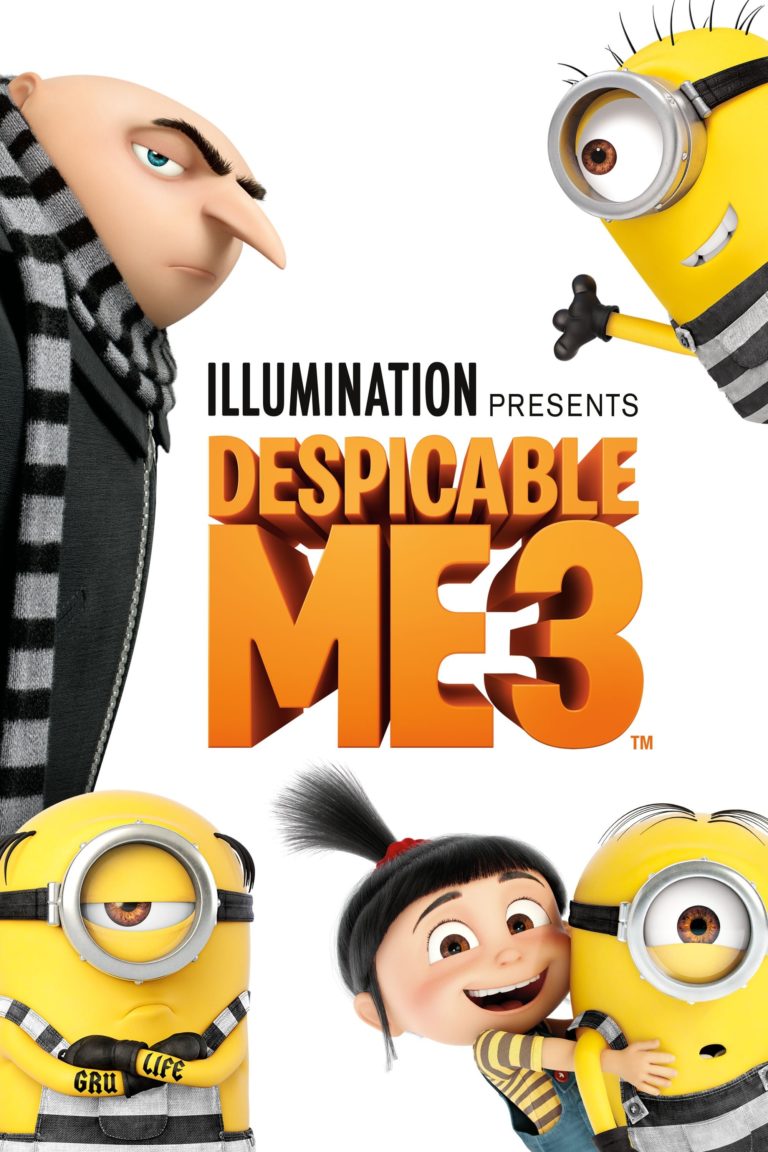 DESPICABLE ME 3 is a high octane, high energy mix of several storylines. Gru and his wife, Lucy, are fired from the Anti-Villain League when they fail to stop Balthazar Bratt from stealing the world’s largest diamond. Meanwhile, all but two of the Minions have left Gru because they’re tired of being good guys. Then, Gru meets his long-lost twin brother, Dru, who wants to be a criminal like Gru was. So, Gru plans a heist to steal back the diamond from Balthazar Bratt and get back his old job.

DESPICABLE ME 3 throws everything that audiences like about Gru, Lucy, the Minions, and Gru’s three adopted little girls into the mix. As a movie with multiple plots, it’s sometimes disconnected, but the fun never stops. So, the movie carries viewers along to a very good, heartfelt ending. The slightly off-color jokes, pratfalls and scatological behavior are milder than they were in DEPSICABLE ME 2. Also, DESPICABLE ME 3 is filled with heartwarming moments. So, the filmmakers are clearly aware of what makes the movie delightful: heartfelt moments of faith and family.

(BBB, CC, VV, A, M) Ultimately moral, redemptive, pro-family, pro-friendship, pro-faith worldview includes little Agnes prays a couple times, brothers reconcile, Gru resists temptation and ultimately does the right thing, relationships are restored, the Minions realize they’d rather be with Gru than be criminals, and the three children accept Lucy as their mother, but with lots of cartoon jokes, snide remarks, and possible innuendoes that are pretty lightweight for the series, plus some subtle mocking of politically correct lifestyles; no foul language, but some jokes about passing gas, the line “Did you pee in your pants” and other borderline exclamations; lots of cartoon violence includes butler is blown up and comes back for more abuse, animals and people are run over, tossed around, shot in the air, covered by rubble, and lots of pratfall jokes involving people, animals and Minions; no sex but married couple shares some chaste kisses; no nudity; drinking in a bar; no smoking or drugs; and, the villain is a brat and does bratty things and lies.

DESPICABLE ME 3 is a high octane, high energy mélange of several storylines that bring fast and furious jokes, fun, reconciliation, prayer, and family to the big screen.

Balthasar Bratt was a TV hero when he was a little boy doing bratty things to disco music and making people laugh with his rebellious, bratty behavior. However, when he started to enter adolescence, braking out in pimples and stubbles, the TV audience rejected him. Seeking revenge, he became a full-fledged criminal. Now, Lucy and Gru are trying to stop him from stealing and heisting the world’s biggest diamond. When they fail, they’re fired by the new director of the AVL. When they return home, the Minions are fed up with the fact Gru won’t go back to being a villain and decide to walk out on Gru. A while later, they get arrested and thrown into prison so they can perform some funny skits.

The three girls try to help Gru, even selling off their toys, such as Agnes’ favorite unicorn. Agnes prays, endearing herself to the audience and to Gru and Lucy.

In the midst of all this disaster, a butler appears whom Gru at first dismisses by firing him off in an exploding rocket. He comes back with his clothes tattered and barely able to walk, to tell Gru that his twin brother, Dru, wants to fly Gru back to Fredonia. Gru doesn’t believe he has a twin brother, so he goes to his mother, who has two musclemen giving her swim therapy. She eventually confesses he does have a twin brother. When she divorced, her husband took Dru, and she took Gru, so she got the worst deal. Gru immediately rounds up Lucy, the girls and the two Minions who stuck with him and flies with the butler in the private jet to Freedonia.

His brother, Dru, is a larger than life, bleach blond, hugging, effusive, Hollywood producer type. His fortune comes from raising pigs, but he has a secret. He wants to be a criminal.

Dru takes Gru into his secret cellar to show him that every one of their ancestors was a criminal, but his father ridiculed him because he failed. He shows Gru his weird weapons, and while taking him on a tour of Fredonia, they steal two lollipops. Now, he thinks Gru is back in the criminal business.

Gru concocts a plan to steal the diamond from Balthazar Bratt so he can be rehired with Lucy by the AVL. This heist almost destroys Gru and Dru, and sets Balthazar Bratt on his final goal of sending Hollywood literally into space.

Can Balthazar Bratt be stopped? Will Dru and Gru be reconciled? Will the Minions escape prison?

DESPICABLE ME 3 throws everything that audiences like about Gru, the minions and the girls, including prayer, reconciliation, loyalty, pratfalls, overcoming evil, into the mix. The movie consists of several seemingly distinct storylines, which eventually come together. As a movie with multi-plots, it’s sometimes difficult to know where you are, but the fun never stops. So, the movie carries viewers along to a very good ending. The slightly off-color jokes, pratfalls and scatological behavior are milder than they were in DEPSICABLE ME 2. In fact, aside from a fart joke at the beginning, the other Loony Tunes humor passes quickly and may even be ignored by most parents.

DESPICABLE ME 3 is filled with heartwarming moments. The girls are adorable, their individual acceptance of Lucy is wonderful, Agnes’ prayers bring a tear to the eye, and Gru’s reconciliation with Dru is absolutely heartrending. So, the filmmakers are clearly aware of what makes the movie delightful: heartfelt moments of faith and family.

Rent or Buy DESPICABLE ME 3: