"Undermined by Too Much Crudity" 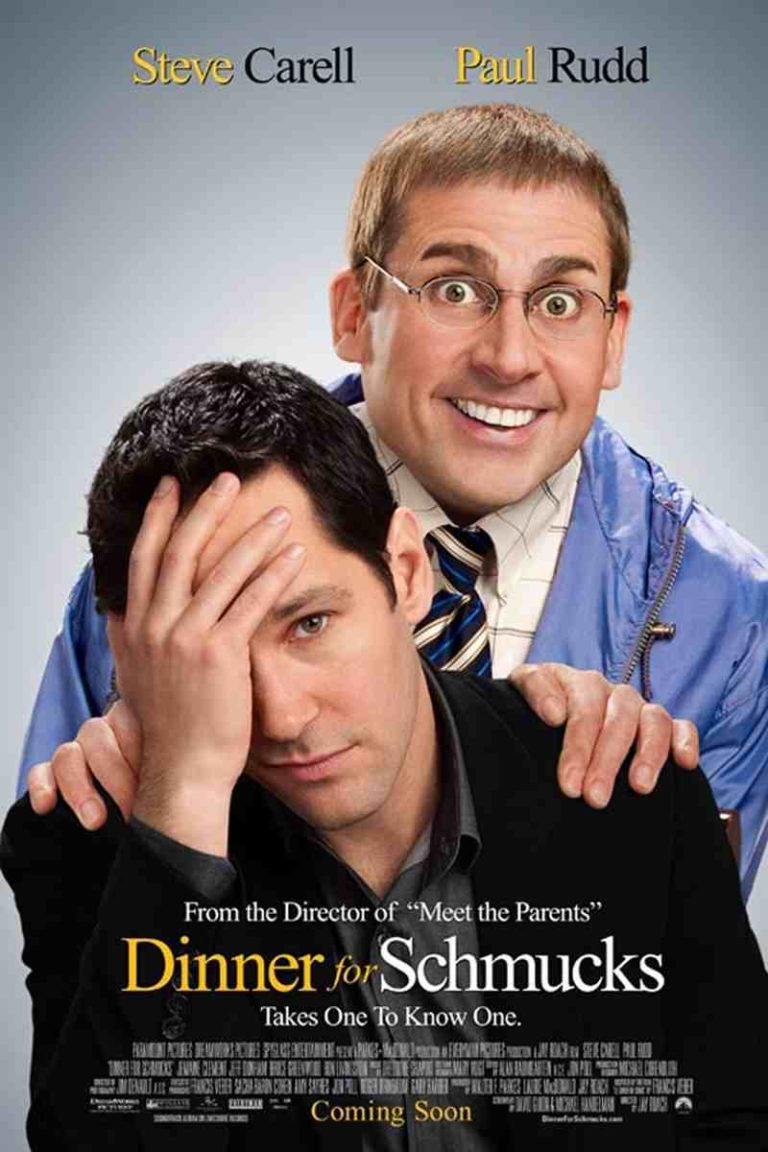 DINNER FOR SCHMUCKS is a comedy starring Paul Rudd and Steve Carell. Tim is a young up-and-coming financial analyst who seems like he has it all – a great job, a gorgeous apartment, a new car, and a beautiful girlfriend who he’s trying to convince to become his fiancé. When a promotion at work presents itself, Tim jumps at the opportunity to move up the corporate ladder. However, before he can secure his promotion, he has to bring an oddball to a corporate party so that all the employees can make fun of them. Tim finds Barry, a lonely IRS employee who has a taxidermy hobby where he recreates great works of art with dead mice that Barry calls “mouse-terpieces.” Tim thinks he’s found the biggest idiot, but he finds himself liking his new friend.

DINNER FOR SCHMUCKS has many laugh-out-loud moments. Regrettably, however, it includes too many crude, lewd jokes, sexual excess, body paint nudity, violence, and some foul language. Needless to say, the crude jokes aren’t very funny either. The movie’s basic concept is funny enough without this vile comedy. Worse, the movie’s moral messages get lost within the lewdness.

(PaPa, RoRo, FR, Ab, Ev, B, C, LL, VV, SSS, NN, A, D, MM) Strong, somewhat mixed pagan worldview with heavy emphasis on Romantic worldview elements, false religion is depicted in a comedic tone as woman believes she channels dead animals and they speak or caw through her, several evolutionary comments such as man being kin to animals in his sexual behavior, some moral elements stress friendship and appreciating people for who they are with some comedic, blasphemous Christian references to taxidermy mice artfully posed as the Last Supper and Jesus; 12 obscenities, one profanity and one crude gesture; strong mostly comic violence includes some pratfalls and hitting, punching, throwing things, vandalism, an artist has violent artwork hanging in his gallery, man is hit by car, another man throws out his back and must crawl around, woman who is violent and sadistic falls over stair rail, woman destroys car of her ex-boyfriend, fecal jokes, and man’s finger is cut off and carried away by a vulture; very strong sexual content includes implied unmarried couple lives together, unmarried kissing, woman says how hard it is to have a one-night stand, mention of a prostitute, mention of oral sex, woman sends sexual message via computer as well as a photo in lingerie, artist is a sexual deviant who mentions wanting to have sexual relations with several women at once, woman writes graphic message on a napkin with her lipstick, man gropes woman, man mentions he has gonorrhea, dead female mouse depicted in a suggestive pose, and graphic discussion of a woman’s private parts; upper male nudity in several scenes including artist is dressed as an animal with a patch of fur covering his lower body, nude women in body paint with the artist and female cleavage; brief alcohol use depicted but no drunkenness; mention of heroin and marijuana; and, lying, blackmail, rich men make fun of odd people by inviting them to a dinner for schmucks.

DINNER FOR SCHMUCKS is an often funny but morally impaired movie about a young up-and-coming financial analyst who, to impress his boss and the partners at his firm and secure a big promotion, must invite the biggest loser he can find to a company dinner where the partners make fun of people.

Tim, played by Paul Rudd, seems like he has it all – a great job, a gorgeous apartment, a new car, and a beautiful girlfriend who he’s trying to convince to become his fiancé. When a promotion at work presents itself, Tim jumps at the opportunity to move up the corporate ladder. However, before he can secure his promotion, he must have dinner with the company partners. There is just one catch. This is no ordinary dinner. This is a dinner where all of the partners invite social oddballs – people with gifts and talents that average adults would consider idiotic – in order to determine which of their unwitting guests is the biggest idiot. If Tim can bring the biggest idiot to the dinner, he almost certainly can secure himself a partnership position.

One day Tim meets Barry, played by Steve Carell. Barry is a lonely IRS employee who has a taxidermy hobby where he recreates great works of art with dead mice. Barry calls them “mouse-terpieces.” Tim thinks he has definitely found his idiot.

Tim invites Barry to dinner with his bosses. Over the next several days and through a series of odd circumstances, however, Tim starts to see past Barry’s oddities and find the broken, lonely man inside. Soon, Tim and Barry become friends, and Tim must decide between his job as a financial partner and his newfound friend, Barry.

DINNER WITH SCHMUCKS is funny with a lot of laugh-out-loud moments. Steve Carell has an unmistakable charm that makes his character not only laughable but also likeable. Sure, the movie is simplistic. The story is certainly not award-worthy, and it relies on cliché jokes that are, at times, eye-roll inducing. Also, the movie falls into the trap of most modern comedies by relying too heavily on sexual content and crude humor.

Sadly, the crude jokes and the deviant – and quite unnecessary – sexual content is where he movie fails to get laughs and instead induces cringing. The concept is funny enough without the vile sexual content, and the filmmakers would have been well advised to edit those crude elements out of their movie.

Even though the movie has a very light moral message of choosing to love people even with their flaws and oddities, the morality is lost among the mostly pagan worldview, which also has contains elements of Romanticism and evolution. There is also some foul language as well as mostly comedic violence.

All in all, DINNER FOR SCHMUCKS has many funny moments, but it has excessively vile content. Media-wise viewers may be well served to make a different, more moral choice, in their comedy. There are many uplifting comedies that do not rely on cheap, sexual shticks to achieve laughs, and MOVIEGUIDE® is here to help viewers find the most uplifting entertainment available.