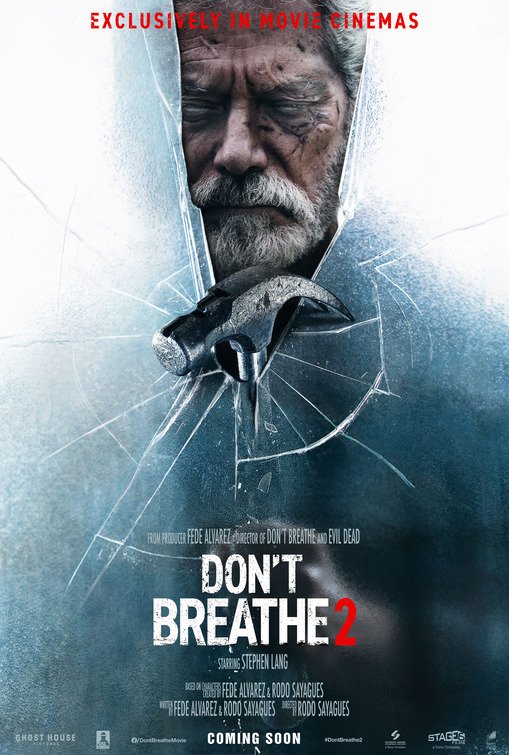 DON’T BREATHE 2 opens eight years after the first movie. The blind veteran, Norman, is living with a young girl, Phoenix, orphaned years ago in a house fire. Norman’s overly protective of Phoenix and teaches her how to protect herself from bad people. Some thugs stalk Phoenix and kill Norman’s Rottweiler dog to lure him out of the house. They invade the home, but Phoenix is too clever for them. When Norman returns, a brutal fight occurs between him and the thugs trying to take her. Eventually, the thugs kidnap Phoenix, forcing Norman to leave his safe haven to save her.

A big plot twist in DON’T BREATHE 2 creates questions about the behavior of the adult characters. As such, it leaves some seemingly glaring plot holes in the story. Also, the movie has lots of strong foul language and more brutal violence than the first movie. Finally, the movie reveals that the young girl’s parents were despicable people. Thus, the physical brutality in DON’T BREATH 2 is matched by abhorrent, thematic brutality against the biblical, traditional concept of the family.

(PaPa, AbAb, B, C, LL, VVV, DD, M):
Dominant Worldview and Other Worldview Content/Elements:
Strong, slightly mixed pagan worldview has an abhorrent, thematic brutality against traditional notions of the family (a girl’s mother and father are depicted as truly despicable people), mitigated by some light moral, redemptive elements about protecting a young girl from evil thugs, antihero is redeemed by the end, and girl asks antihero, “Is God bad,” and he replies, “No, God is fair”
Foul Language:
22 obscenities (mostly “f” words), one light profanity
Violence:
Lots of extreme and brutal violence (some of it occurs offscreen or is implied), plus some strong onscreen violence, such as characters are stabbed, blind man gouges out villain’s eyes, fighting, hero and villains shove each other against walls and objects, villain pierces another villain’s cheek with a screwdriver to let him breathe because the hero has put some kind of glue or clear epoxy over the man’s nose and mouth, woman’s arm cut off, hero smashes a villain’s head, people are shot, villain tries to drown girl hiding in a steal tool cabinet and then puts a live wire in the water to force her to come out, shootout occurs, a couple explosions, a burnt corpse is depicted after one explosion, vicious dog chases hero, but they later make friends, it’s implied that the villains have killed the hero’s dog, and he finds out when he comes upon the dead dog and feels blood on the dog
Sex:
No sex, but a character admits to having raped and killed
Nudity:
No nudity
Alcohol Use:
No alcohol use
Smoking and/or Drug Use and Abuse:
Brief smoking and the bad guys are meth dealers ; and,
Miscellaneous Immorality:
Older man has stolen a girl who was orphaned by a house fire to raise her as his granddaughter (but there’s more to the story), an illegal organ donor operation is attempted but the operation would kill one of the two people on the two operating tables, and an orphaned girl’s guardian is over-protective, but, it turns out, for good reason.

DON’T BREATHE 2 shows the blind veteran from the first movie trying to protect a pre-teen girl from some bad home invaders, but it turns out the thugs are meth dealers with an even more nefarious purpose on their greedy, warped minds. The big plot twist in DON’T BREATHE 2 creates some questions about the behavior of the adult characters, but the biggest problems with the movie, besides its strong foul language, is its excessive brutality and the movie’s anti-family revelation that the girl’s own mother and father are pretty despicable people.

The movie opens eight years after the blind veteran from the first movie, Norman Nordstrom, had his secret life upset by three thieves who invaded his home to steal some insurance money. Inexplicably, Norman is now taking care of a little girl named Phoenix. Their relationship is like grandfather/daughter, but, given what happened in the first movie, those who saw the first movie will wonder if Norman has kidnapped a baby or young child (Norman’s own daughter was killed by a drunk driver, and the first movie showed him trying to find a replacement for his dead daughter).

Instead of living in a dilapidated, abandoned Detroit neighborhood like the first movie, Norman and Phoenix are living somewhere on the city’s outskirts near some woods. Norman keeps Phoenix mostly confined at home, because of all the dangers in the world. Also, he homeschools her and teaches her how to protect herself and hide whenever she’s threatened by anything. Meanwhile, he runs a small greenhouse nursery, and a pickup truck driven by a young female driver named Hernandez periodically picks up his products.

When the driver comes to pick up some more trees, flowers and plants, Norman lets Phoenix ride with her to the delivery place, which is next to a shelter for abandoned children and single mothers with a little playground. Be back by sundown, he tells her, but sends along his tough Rottweiler dog.

While playing around the playground, Phoenix runs into a creepy bearded guy wearing a hat. Phoenix is wary of him, but he tries to talk to her. At that moment, the dog enters, and Phoenix leaves with him. As Hernandez begins to drive Phoenix and the dog back home, the creepy bearded guy orders two compatriots in a truck to follow them.

Cut to Hernandez returning from taking Phoenix home, but her way on a small two-lane road is blocked by the truck with the two men. She gets out of the truck to ask the two men to move. The driver notices that both he and she are wearing Army jackets showing they served in Iraq. When Hernandez returns to her truck and tries to drive by the other truck, she’s attacked from the back seat by a creepy blonde guy, who strangles and stabs her.

Later, the guys in the other truck coax Norman’s dog away from the porch and kill it. When Norman goes looking for the dog, they invade the house looking for Phoenix, but she’s too clever for them. Meanwhile, a TV news report says there’s been a string of kidnappings in the Detroit area, apparently part of a ring that’s been selling human organs.

Multiple brutal fights in the house ensue as the men try to take Phoenix. It isn’t long before the creepy breaded guy shows up to lead the assaults against Norman. Eventually, the thugs torch the house, injure Norman and take Phoenix. However, Norman escapes the raging fire, but with his house burning down, he’s forced to try to follow the thugs and save Phoenix.

It turns out that Phoenix was orphaned when her parents were killed in a house fire. However, a major plot twist reveals that the thugs who kidnapped Phoenix have a despicable, ulterior motive for kidnapping the little girl. Their reasons for the crime involve her death.

The big plot twist in DON’T BREATHE 2 creates some questions about the behavior of the adult characters, not only that of the thugs but also Norman’s. As such, it leaves some seemingly glaring plot holes in the movie. Also, the plot twist carries some over-the-top moments, not to mention an increased brutality level in a story that already seems more brutal than the first movie, which itself was excessive, albeit much better made.

Though it doesn’t have any lewd twists like the first movie, DON’T BREATHE 2 has lots of strong foul language and excessive brutal violence. What also makes the movie bad, however, is the revelation during the movie’s development of the big plot twist that the girl’s own mother and father were pretty despicable people. So, although Norman redeems himself by the end by saving Phoenix, the physical brutality in DON’T BREATH 2 is matched by abhorrent, thematic brutality against the biblical, traditional, normative concept of the family.