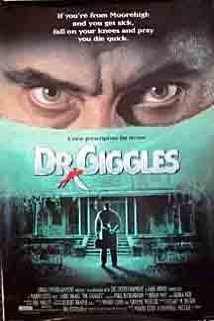 DR. GIGGLES is a horror movie about the deranged son of a deranged doctor who performs heart transplants on living subjects. DR. GIGGLES is chock-full of the most gruesome violence imaginable, combined with perverse humor and sex-hungry teenagers. DR. GIGGLES is much more than a waste of time. It is 90 minutes of pure poison aimed at adolescents.

(LL, VVV, S) 14 obscenities & 1 profanity; woman fondled with severed hands, man injected with poison which causes him to vomit blood, maiming and killing with various medical instruments including saws, needles, thermometers, scissors, and gruesomely improvised surgery equipment, boy cuts his way out of corpse he's been sewn into, man operates on himself to extract bullets, many gory close up shots of open chests of both living and dead people; and, implied sexual relations between teenage couples and "safe sex" message.

In DR. GIGGLES, Evan Rendell Sr. was a doctor in the small town of Moorhigh. His son, Evan Rendell Jr., wanted to follow in his footsteps. Unfortunately, when Dr. Rendell’s wife developed a terminal heart condition, Dr. Rendell went insane and began to abduct unwilling people for transplants. When Rendell’s carnage was revealed, the townspeople killed him, but his son disappeared and ended up as an anonymous resident at the Tarawood Mental Institution. Forty years later, Rendell Jr., known as Dr. Giggles, escapes and returns to Moorhigh to continue his father’s practice.

DR. GIGGLES is full of some of the most gruesome violence imaginable, made especially perverse by the use of bizarre medical equipment to kill and maim. Coupled with this brutality are several one-liners. GIGGLES for some new kind of comedy. Perhaps the ultimate expression of disregard for human life is to laugh at the torture and death of others. The teenagers in the movie are constantly engaged in drinking and sexual pursuits, and all of the girls other than Jennifer are one-dimensional sex hungry vixens. DR. GIGGLES is much more than a waste of time. It is 90 minutes of pure poison aimed at adolescents.

Audience: Obviously aimed at teenagers and pre-teenagers who shouldn't be able to get in to R movies but do anyway.