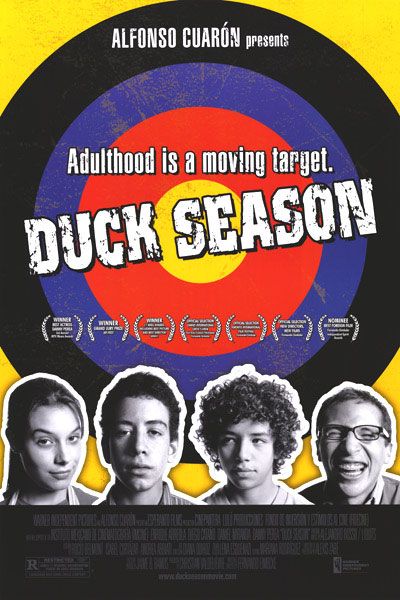 DUCK SEASON is a dry, wacky comedy from Mexico about one Sunday in the life of three aimless teenagers and a young pizza delivery man. Fourteen-year-old Flama and Moko are left alone in Flama's apartment. They eat junk food, drink Coke and play a violent video game. Then, 16-year-old Rita enters, asking to use the stove because her family's stove is broken. The power goes out briefly, and the two boys order the pizza that Flama's absent mom is allowing them to buy. They get into an argument with the pizza delivery man, who's late because the elevator doesn't work. They refuse to pay him, and he refuses to leave. Eventually, all four youths reveal important things about their lives, especially after Rita feeds them brownies laced with marijuana.

DUCK SEASON is very funny and the acting is excellent. Regrettably, about midway through the story, Moko reveals he has a homosexual crush on Flama. This gratuitous element is abhorrent, as is the sequence where the young characters eat the brownies laced with marijuana. DUCK SEASON also has some very strong foul language. All this negative content sends a sad message.

DUCK SEASON is a very funny movie from Mexico about one day in the life of three wacky teenagers and an aimless young pizza delivery man. Regrettably, about midway through the movie or so, one of the teenagers reveals he has a homosexual crush on one of the other teenagers. There is also a sequence where the young characters eat brownies laced with marijuana.

The movie takes viewers into one particular Sunday in the lives of two 14-year-old boys, Flama and Moko. Flama’s mother leaves the boys alone for the day, but with money for pizza. After playing Halo, the violent video game, for a bit and snacking on junk food, they are interrupted by Flama’s 16-year-old neighbor, Rita. She wants to use the oven for baking because her mother’s is broken. Or so she says.

When the electrical power suddenly goes out, Flama and Moko get around to ordering the pizza, but the elevator in their building is out. Consequently, the poor young pizza delivery man, Ulises, is seconds late according to Moko’s watch. Flama and Moko refuse to pay for the pizza, since the delivery man didn’t get there in 30 minutes, but the pizza delivery man refuses to leave until he gets his money. Flama challenges the man to a soccer video game for the money.

Rita asks Moko to watch the time for her on the cake she’s making, but Moko fails to warn her and the cake is a failure. She then ropes Moko into helping her with another baking project.

While in the kitchen, Rita and Moko kiss a couple times, though Moko is a little hesitant. Rita licks Moko’s ear, but Moko doesn’t like it. Rita then serves brownies to the three males, but she doesn’t tell them she put a bunch of marijuana in them. They soon discover it, but go on eating the delicious brownies anyway.

Flama tells everyone that his parents are getting a divorce and are arguing over who gets the wildlife painting of some ducks that rests above the TV set. Ulises admires the duck painting, and Rita reveals that today is her birthday, but nobody at her home cares. Ulises tells them he had to quit school because of his sick aunt. At one point, Moko tells Rita that he has romantic feelings for his best friend, Flama. Later, when they are alone, Moko touches Flama’s hand, and Flama lets Moko lick his ear like Rita did.

Moko’s revelation of his homosexual feelings completely changes the viewer’s perception of their real relationship and their earlier scenes together. Even so, Flama doesn’t seem to be as interested in a homosexual relationship as Moko, and the movie ends on an anti-climactic note.

During this day in these characters’ lives, the electrical power goes out in the apartment building two or three times. This adds to the lackadaisical nature of the story.

Shot in black and white, DUCK SEASON is very funny and whimsical. It explores the loneliness of teenage life, the exuberance of youth, the effects of divorce, and the power of love and friendship. The gratuitous homosexual sub-plot and the marijuana incident are abhorrent, however, especially when one considers the ages of the three teenagers.

All four of these young characters are longing for a better, more satisfying life. Except for Ulises, however (who at least gets a painting out of the deal and quits his mediocre job), all that’s left for them is friendship, and perhaps romance. The friendship part of their lives is uplifting at times, but the rest of it is mostly sad.