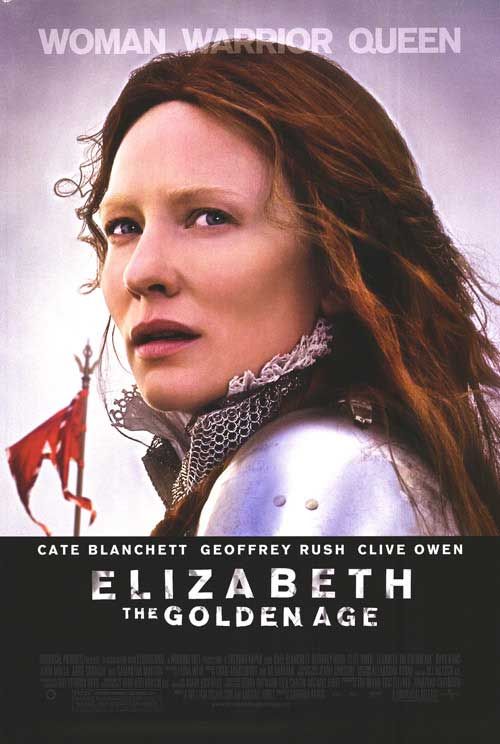 A sequel to an earlier movie, ELIZABETH: THE GOLDEN AGE stars Cate Blanchett as the great Queen of England in the 16th and 17th Centuries. Growing keenly aware of the changing religious and political tides of late 16th century Europe, Elizabeth finds her rule openly challenged by the Spanish King Philip II (Jordi Molla) with his powerful army and sea-dominating armada determined to restore England to Catholicism. Preparing to go to war to defend her empire, Elizabeth struggles to balance ancient royal duties with an unexpected vulnerability in her love for Sir Walter Raleigh.

ELIZABETH: THE GOLDEN AGE is engaging and exciting. Moral virtue and strong Christian faith are encouraged and uplifted. The Queen is a real life human being with real struggles and fears. She overcomes these with integrity and sacrifice, ultimately becoming the Queen mother of all of England. The movie extols holding to one’s Christian faith, despite the consequences. It also applauds ultimately trusting in God for the outcome. In fact, even King Phillip II and his religious leaders seek forgiveness for their pride. There is some very strong violence, implied sexual content, astrology, and brief nudity, however.

(C, BB, Ab, PC, RH, O, FR, L, VVV, S, NN, D, MM) Light, but mixed, Christian worldview as movie is based on the Spanish Inquisition and the fight between Catholic versus Protestant Theology, with strong, but mixed, positive morality and views of God, prayer and reliance on God, with strong moral elements as morality and doing what is right are extolled, but some negative anti-Christian politically correct revisionist history content, including occult content when Queen seeks an astrologer for answers to her future in a pending war; three obscenities and one light profanity; very strong violence depicted in torture chamber as people are tortured in order to discover plots against the queen, hanging and other forms of capital punishment shown although not excessive blood, tongue cut out, shooting, attempted stabbing, attempted assassination of the queen; one sex scene that’s not overt but sex clearly implied; full backside nudity shown of queen; no alcohol; one scene with queen attempting to smoke tobacco; and treason, deceit between family members, rage and religious persecution, lying, revenge, treason, and plotting murder.

A sequel to the original ELIZABETH, Cate Blanchett and Geoffrey Rush return for this historical drama, ELIZABETH: THE GOLDEN AGE. Set when the King Phillip II Spain is planning his Spanish inquisition to cleanse the world, Queen Elizabeth (Cate Blanchett) struggles to protect her throne and her people as religious and political systems are changing. ELIZABETH: THE GOLDEN AGE depicts a time of familial betrayal, unsure allies, religious persecution, and a discovery of the personality of the iconic Queen of England.

Preparing to go to war to defend her empire, Elizabeth struggles to balance ancient royal duties with an unexpected vulnerability in her love for Sir Walter Raleigh (Clive Owen). But, Sir Walter Raleigh remains forbidden for a queen who has sworn body and soul to her country. Unable and unwilling to pursue her love, Elizabeth encourages her favorite lady-in-waiting, Bess (Abbie Cornish), to befriend Raleigh to keep him near, but this strategy forces Elizabeth to observe their growing intimacy.

As she charts her course abroad, her trusted advisor, Sir Francis Walsingham (Geoffrey Rush), continues his masterful puppetry of Elizabeth’s court at home and her campaign to solidify absolute power. Through an intricate spy network, Walsingham uncovers an assassination plot that could topple the throne. As he unmasks traitors that may include Elizabeth’s own cousin Mary Stuart (Samantha Morton), he unknowingly sets England up for destruction.

Queen Elizabeth, hearing the unrest of her people and their desire for her to marry and produce an heir, struggles with the idea of marriage. She is presented as an idealist who will not settle and marry to please the people, but who desires authentic love. Sir Walter Raleigh enters into the picture as a dashing and dangerous explorer, devoted to England and its Queen heart and soul. A friendship develops as well as a forbidden love. This produces a subsequent struggle between her feelings for Sir Walter Raleigh, or her duty and loyalty to the throne. The movie depicts the struggle between the Queen’s desire to serve her people fully or to meet her own needs in love, life and service. Her desire to balance this struggle with courage and integrity flows throughout the whole movie, with even her weaknesses identified. Even as Queen Elizabeth seeks to identify her personality as Queen, her throne is threatened, first within her own family and ultimately with a mentally unstable and angry King Phillip II of Spain, who plots his Holy War against all of England in hopes of restoring Catholicism.

Sir Francis Walsingham, Elizabeth’s trusted advisor and friend, is fully devoted to his Queen. He serves his country and tirelessly pursues spies and plots against Elizabeth. Brilliantly, he advises his Queen on matters of state and masterfully puppets the court.

ELIZABETH: THE GOLDEN AGE is beautifully shot, but not as seamlessly shot as the first film. The cinematography was at times grainy and the lighting a bit off. The battle scenes at sea were outstanding, leaving a desire for more. The costumes were phenomenal throughout the film, as well as the set design. Characters are well developed for the most part, but at times Elizabeth seemed to lose direction in character, her battle speech to her troops deflated and uninspiring. Otherwise, her character shows devotion to her country, protection of her people regardless of the risk this caused her, and the sacrifice of herself for the greater good.

Religion and relationship to God are strongly and positively demonstrated throughout the film. Prayer is a common theme throughout the whole film, as Queen Elizabeth often seeks wisdom and courage from God. One negative religious element was the seeking of an astrologer for help and information about the pending war and her fate. While the astrologer clearly noted his inability to foretell the future, pointing to greater powers, astrology was depicted in a positive light and acceptable within the Protestant faith. This is definitely and absolutely untrue and dangerous in its depiction. The Lord is clear in His commands regarding astrology and enchanters, which are detestable to the Lord. For any adolescents watching the film, parents would be wise to clarify this point. Otherwise, however, the movie extols holding to one’s Christian faith, despite the consequences. It also applauds ultimately trusting in God for the outcome. In fact, even King Phillip II and his religious leaders seek forgiveness for their pride.

All in all, ELIZABETH: THE GOLDEN AGE is an engaging and exciting film. Moral virtue and strong faith are encouraged and uplifted. The Queen is shown as a real life human being with real life struggles and fears. She overcomes these with integrity and sacrifice, ultimately becoming the Queen mother, mother of all of England.

ELIZABETH: THE GOLDEN AGE tells the thrilling tale of an era – the story of one woman’s crusade to control love, crush enemies and secure her position as a beloved icon of the western world.