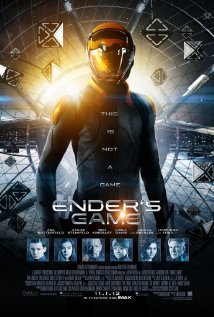 ENDER’S GAME is a science fiction action movie about a 12-year-old genius, Ender Wiggins. The military recruits Ender to train with an elite group of other gifted children to defeat an alien race that almost wiped out earth in a past war. Ender enters Battle School, where he learns tactical warfare strategies. All along, Colonel Graff pushes Ender farther than any other student. Meanwhile, Ender struggles with his own nature as his violent side starts to overpower his compassionate side. Will the pressure on Ender’s shoulders become too much for him to bear?

ENDER’S GAME is highly entertaining with a great cast and stellar visuals and special effects. However, the story moves a little too quickly at times. The movie has a strong moral worldview overall, but that’s mixed with some humanist elements. Thankfully, the offensive content is minimal, with very little foul language, no lewd content, and only a few violent scenes between Ender and some young bullies. Caution is advised for ENDER’S GAME, due to that brief violence and some complex themes that might be difficult for young children to comprehend.

(BB, C, H, Ev, L, VV, N) Strong moral worldview with redemptive elements stressing compassion (even for one’s enemies), diplomacy over war, self-defense over pacifism, the negative impact of a militaristic society that uses children, and one use of “Thank God,” with some humanist elements and attitudes, including a “kill or be killed” mentality implying an evolutionary “survival-of-the-fittest” ideology; two light obscenities and one light profanity, and a child vomits; strong and light violence and action violence includes zero gravity room where students battle with harmless freeze guns, 12-year-old title character gets in two fights, the first one he overpowers a boy much bigger then him in self-defense and continues to kick the boy even when he’s down in order to scare the bully’s friends away, title character is jumped by another bully in a shower, and the bully falls over and fatally hits his head on the edge of the shower, a monitoring device is pulled from the back of 12-year-old’s head, spaceship battles, military training, and a few scary monsters are seen in a video game partially used for training; no sexual content; upper male nudity; no alcohol; no drugs; and, nothing else objectionable.

ENDER’S GAME is a science fiction action film from bestselling author Orson Scott Card’s award-winning novel. With a stellar cast and fantastic visuals, ENDER’S GAME is both compelling and exciting.

In it, the alien race known as Buggers once attacked earth, and, at great cost, the humans defeated them. Years have passed, and Earth has diligently readied themselves for any future attack, training and nurturing the brightest child geniuses to possibly be the leader they need to defeat the Buggers.

Ender Wiggin (Asa Butterfield) is a shy, but brilliant 12-year-old boy who comes from a family that has all tried and failed at entering the International Fleet. His violent and brutal older brother, Peter, lacked the self-control of a leader, and Ender’s sweet and kind sister, Valentine, was too compassionate for the military. This left Ender, commonly called a “third” because having three children was socially and legally discouraged.

Preliminary testing of Ender gives Colonel Hyrum Graff (Harrison Ford) hope that Ender might be the one with the tactical intelligence to defeat the Buggers for good. Ender, once accepted into Battle School, learns strategy, combat, and, most importantly, how to be a leader. As Graff pushes Ender harder than any other student, Ender struggles with his own nature. His training pushes him toward further violence and aggression while he desperately tries to hold onto the compassion his dear sister gave to him. Ender’s unprecedented skills increase and the responsibility of his mission becomes unbearable.

ENDER’S GAME carries the themes of the original novel quite well, but the movie fails at being great on its own merit. Its inclusion of certain aspects from the book muddle the story a bit and increase its pace too quickly. That said, the movie is still highly entertaining with creative, unique action sequences, fantastic CGI images, and a cast that captures the character motives and personalities magnificently.

The worldview is purposefully mixed, with the filmmakers deliberately wanting to spawn discussion among young people regarding a myriad of topics.

One of the novel’s major themes, which carries into the movie, is about warfare and how societies go about winning a war. Though no particular nation is spotlighted in the movie, earth as a whole has turned to militaristic paranoia, borrowing from a Darwinist philosophy the idea of “kill or be killed.” This is the prevalent worldview of Colonel Graff and the International Fleet as Graff trains these young boys and girls.

On the flip side, one of Graff’s officers, Major Anderson (Viola Davis), disagrees with Graff’s intense training. She works to defend the children’s innocence.

This debate goes on until the end, when Graff’s philosophy of war is questioned and replaced with compassion. Graff’s “us or them” mentality is put in its place with Ender’s statement “the way we win matters.” Biblically, Ender correctly shows the importance of compassion.

(SPOILER ALERT) One problem with Ender’s eventual empathy for the Buggers is that it doesn’t transfer over to the audience. The lack of information regarding these aliens leaves it unclear whether Ender’s attitude is truly the correct one. Ultimately, however, Ender’s view seems to be correct, though some aspects of it may be questioned. (END OF SPOILERS)

The movie also rightly puts the militaristic use of children in warfare in a negative spotlight, even though there’s little violence. Ender’s diplomatic and compassionate leadership with his fellow Battle School students proves to be more powerful than bullying and fear. The themes addressed should generate healthy discussion among all viewers, including younger ones.

Thankfully, the offensive content in ENDER’S GAME is minimal. There’s very little foul language, no sex, and only a few stronger violent scenes, especially between Ender and some young bullies who antagonize him. Most of the children’s combat training is simply a glorified version of laser tag in a zero gravity room. Caution is advised for ENDER’S GAME due to brief violence and some complex themes that would be difficult for younger children to comprehend.