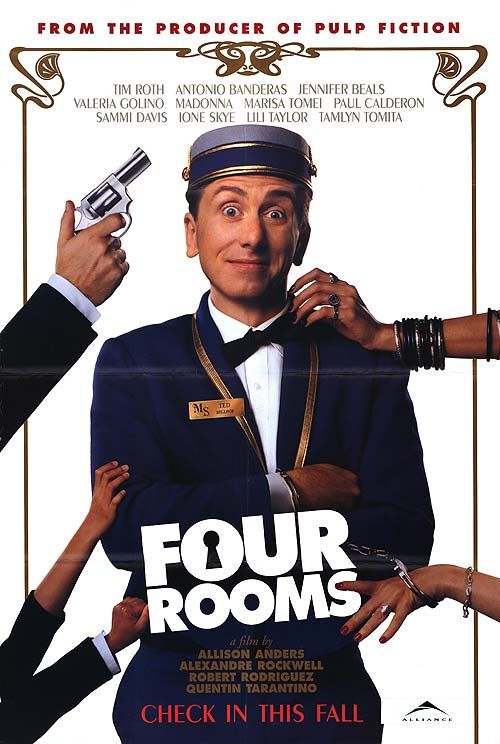 FOUR ROOMS traces a night in the life of a new bellhop, Theodore, as he find himself enmeshed in the sick, immoral lives of the occupants of four separate hotel rooms. The movie succeeds in keeping a lively pace, providing a plotline filled with unexpected twists and quirks. On moral grounds, however, not a single character is presented as anything less than spiritually dead and shamelessly immoral.

Tim Roth stars in FOUR ROOMS as bellhop Theodore. He is left on his own during his first night on the job at a swank urban hotel. No sooner has the evening started than Theodore finds himself enmeshed in a series of outrageous situations with the occupants of various rooms. Each of four rooms serves as an act, each filmed by a different director, with Theodore as the main attraction among these separate events. Everyone needs Theodore for something, whether it be his sex, his participation in a sick and inexplicable power game, his services as a baby-sitter, or his mercenary assistance as a gambling enforcer.

This is a theatrical film, which is heavy in dramatics. Although it is fast-paced, its unexpected twists regrettably revolve around the steady corruption of the hapless bellhop. Grossly immoral situations are depicted in each of the rooms. In one room we see bare-breasted witches performing magical rites to a goddess. In another room, a man’s finger is chopped off. The movie also depicts sado-masochism and extensive use of foul language. Because no character is presented as anything less than spiritually dead and shamelessly immoral, viewers can’t help but worry about the movie’s moral implications after the laughter dies down.