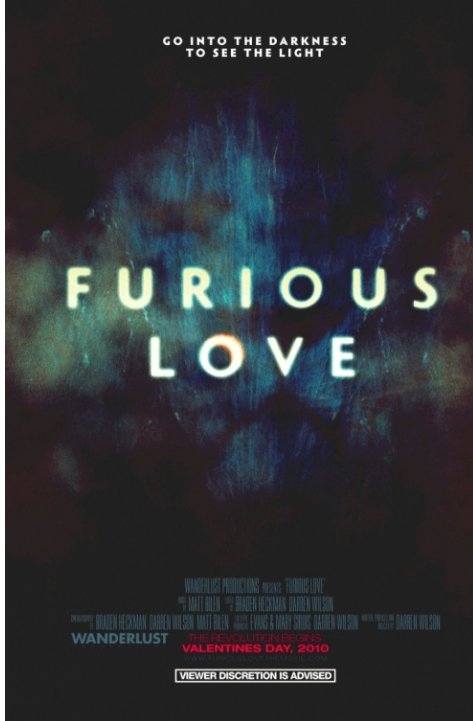 With no agenda and childlike curiosity, FURIOUS LOVE invites viewers to continue the journey that Darren Wilson’s previous documentary, FINGER OF GOD, began. Continuing to examine the reports of the supernatural and miraculous, FURIOUS LOVE asks the question: What does Jesus’ radical Love look like? In Tanzania, a demon is exorcised at an evangelistic crusade. In another part of Africa, a man’s knee is healed despite the Western Christian’s doubts. In Indonesia, accounts of continual spiritual warfare prove the power of Jesus and his love. In Chicago, a deliverance minister works to free many from the power of darkness. The journey continues to Amsterdam, to the Congo to Spain, and even to California for a New Age festival. At every stop, Jesus Christ’s radical love is demonstrated.

FURIOUS LOVE is a wild ride that asks some honest questions and seeks out the answers with serious investment and resolve. The goal is to seek out and learn about Jesus’ love. The documentary is well made and genuine. Often, Western Christian responses to the supernatural are wildly different from the response of believers in other parts of the world, where spiritual darkness shows itself more overtly.

(CCC, BBB, Pa, O, L, V, M) Very strong Christian, biblical worldview with descriptions of pagan rituals and occult practices; one obscenity and one profanity in quoted context; no violence but verbal description of pastors killed by Hindu extremists and intense, graphic images during exorcism; no sexual content; no nudity; no alcohol; no smoking; and, rebellion, sinfulness and demonic activity shown but they are rebuked and healed.

Sans agenda, disarmingly honest and non-hyped, with childlike curiosity, FURIOUS LOVE continues the journey that Darren Wilson’s previous documentary FINGER OF GOD began. Continuing to examine the reports of the supernatural and miraculous, FURIOUS LOVE asks the question: What does that kind of radical Love look like?

Darren begins in Tanzania with an evangelistic crusade by Jeff Jansen. A white tent on the perimeter of a stadium field recalls the “decision” tents of a Billy Graham meeting. But, it quickly becomes apparent that this is no ordinary gathering. Jeff leads an altar call, people respond and all seems familiar enough, until screams are heard and Darren quickly finds himself in a war zone. Playing like a horror movie script, a young girl foams at the mouth, screaming, “I’m not coming out!” People gather around praying over her as she writhes in battle. Not your mother’s self-help Christianity here, this is a war of the invisible. Whatever your theology, it is a scene that asks to be considered on its own terms. Greg Boyd asks, “Does this world reflect an all powerful, all merciful God?”

In another region of Africa, Christians reach out to villagers. Comfortable distance gets challenged when Darren is invited to pray for a man with a painful knee. With an abundance of doubt, Darren prays for the man’s knee. Within moments the man reports “it’s well,” and no one is more surprised than Darren. The man eagerly prays a prayer for salvation. God apparently doesn’t mind using doubting vessels. No programs, no tracts, or particular methods here – just hands-on ministering to the felt needs of people in pain.

Greg Boyd remarks, “Christians are known for a lot of things. . . but not their outrageous love.” He challenges the church at large, stating that real love ministers to real needs, so we need to let our lives be the message and simply get started loving people.

Enter Philip Mantofa, a dynamic 33-year-old Indonesian evangelist that most people in the West don’t know. Philip pastors a church of 30,000 in the largest Muslim nation in the world. He begins sharing his own vivid experience with a very “real darkness.” An event witnessed by masses, he recounts how a renowned witch doctor died, was buried, and resurrected three days later in direct blasphemy of the Gospel. This same witch doctor later experienced a vision in which Jesus encountered him, challenging him and inviting him to experience “real power.” According to Mantofa, this real power comes from God the Holy Spirit “whose first name is Holy.” “Holiness” is our part, he says, “Spirit” is God’s part, and this is the apparent key to the kind of love Darren Wilson is investigating in FURIOUS LOVE.

Other accounts of “real darkness” follow, further expanding the picture and challenging western Christian perspectives. Angela Greenig, a deliverance minister from Seattle, describes her experience exorcising a “fifth bride of Satan.” Her name changed for her own protection, the delivered girl, “Esther,” describes her first encounter with Greenig.

Opening the front door without touching it, she is stopped dead in her tracks by love – “like love piercing into my soul through her.” It is a scene more at home in a Stephen King novel than a prayer book. However, J.P. Moreland suggests it really just highlights the typical western church’s choice opting for a “naturalist” worldview in which miracles happen through understandable and reasonable means such as modern medicine. This contrasts a third world primitive approach that believes in things like real possession and real deliverance: a worldview, Moreland notes, far more in keeping with a biblical worldview.

Armed with newly acquired confidence and a comfort level with such matters, Darren shows up at The Occult & Witchcraft Festival in Salem, Massachusetts, self-admittedly “to pick a fight.” Following evangelist friend Jason Westerfield of the FINGER OF GOD adventure, they begin asking people on the streets if they would like to receive prayer. Long story short, nothing happens. Puzzled but not deterred, they regroup and with fresh resolve determine to be all the more bold setting up their own street stand for “Spiritual Cleansings and Readings.” It quickly becomes apparent that God is in a mood to move but not to pick a fight. Quite the opposite, a band of would-be antagonists are disarmed in moments, physically experiencing a presence and comfort that leaves them wanting more. A hooded warlock-in-training receives a word of knowledge from Westerfield completing the disarmament. He uncovers his head in prayer.

Globetrotting to Thailand, the filmmakers head into the heart of the international sex trade. Again, live and in person, the disarming presence of Jesus shows up drawing in the manager of a bar, followed by a “ladyboy” in preparation for a night of working the streets. The one is healed physically of pain in her back and shoulders. She wants more. The other is drawn in by simple kindness and the listening ear of Darren’s friend, evangelist Will Hart. Again, within moments, viewers witness a simple conversation, followed by a simple prayer. Praying for something as simple and common as pain in the shoulders, a stranger experiences tangible “real power” relieving pain, and wants to know more. Moments later, heart-gates seem to open wide and Jesus enters, transforming with dignity and real “outrageous” love in action. No formula, no agenda, except love.

The movie then tells about an aging prostitute from Amsterdam’s Red Light District who receives Jesus, loves him passionately, but remains stuck “working the streets” with no other way to live or feed her son; an untidy scenario that seems to defy a reasonable evangelism. The filmmakers up the ante. They follow in the famous footsteps of Mother Theresa, to India where a woman “Shanti” works among the Untouchables. Shanti describes in detail a slaughter of innocence not covered in the news. When radical Hindus attacked, churches were burned and entire Christian families killed or separated. A young Christian girl who survived the attack recounts her own question of God asking, “Why is this happening? What have we done wrong?” In response, she is reminded of the honor of participating in the sufferings of Christ.

The filmmakers go on to visit a war zone in Congo, a Madrid city dump, home to heroin addicts, and, finally, a New Age festival in Mt. Shasta, California. In each successive vignette, the only principle clearly and consistently evident is Love.

Vineyard pastor Robby Dawkins shares a dream God gave him that seems to encapsulate the entire journey. He dreamed of a church sanctuary filled with broken people “doing everything wrong” – even doing drugs in the pews. With great fury, he assails them for dishonoring “God’s house” and commands them to get out! God responds to him in the dream, “Why would you send out what I have sent in?” In other words, “Keep it simple, love them, and let Me change them.” This is what “furious love” looks like.

FURIOUS LOVE is well made and compelling in all aspects. It is a wild ride that asks some honest questions and seeks out the answers with serious investment and resolve. In the end, the answers that are offered invite an equally honest look and heart response.