"Thank Heaven for the Miracle of Maturity" 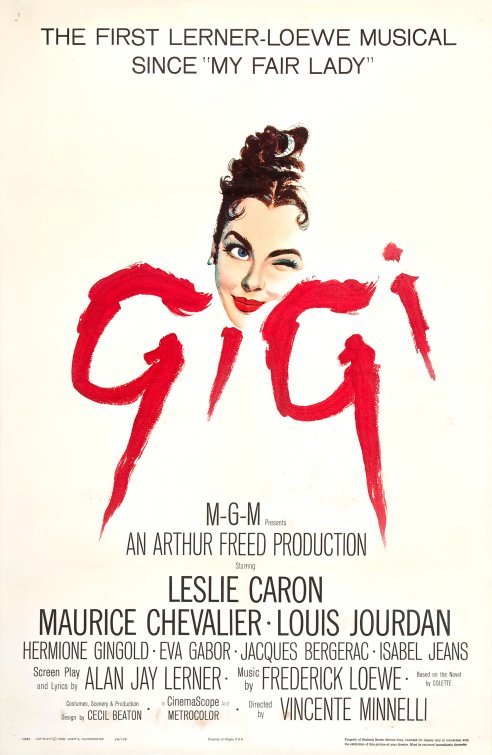 GIGI is a joyous, poignant American musical classic set in 1900 in Paris. The story follows a teenage girl from a poor family being groomed by her great aunt to be a mistress to rich men when she comes of age. Gigi and her grandmother have been befriended by a rich but bored playboy named Gaston. Whenever Gaston visits them, his boredom disappears, and he is able to relax and enjoy himself. After returning from an extended stay in Monte Carlo, Gaston suddenly finds himself falling for Gigi, who’s blossomed into a young woman. However, Gigi doesn’t want to be one of Gaston’s discarded mistresses. It looks like Gigi won’t be seeing any more of Gaston. Or, will she?

Directed by the great Vincente Minelli, with an assist by Charles Walters, GIGI is filled with the glamour of a bygone era. The movie blossoms with emotional highlights and joyous moments. Despite the movie’s adult themes, everything leads to an uplifting celebration of marriage that begins with a hearty, “Thank Heaven!” GIGI is a four-star delight, but MOVIEGUIDE® advises caution for older children.

(C, B, Ro, V, S, A, D, M):
Dominant Worldview and Other Worldview Content/Elements:
Light Christian, moral worldview mixed with some Romantic elements extols marriage, woman says “Thank Heaven” when a man asks for her granddaughter’s hand in marriage, a couple positive references to God, a young woman asks for prayer and her request gets a positive outcome, a reference is made to the “miracle” of becoming a mature woman, a man makes a plea for “kindness, sweetness, benevolence, and a tender heart bulging with generosity,” and an older man tries to give advice on managing love affairs to his playboy nephew (this is sometimes handled in a comical way that pokes fun at flitting from woman to woman and sometimes getting betrayed by them)
Foul Language:
No foul language
Violence:
No depicted violence but news is received that a distraught, scorned woman has attempted a fake suicide with “insufficient poison” after her former lover exposed her cheating on him
Sex:
No sex scenes but three characters are said to have had a series of lovers, an older woman who’s had a series of rich lovers is training her great niece to be a professional mistress, but the girl balks at the prospect, and eventually the man she loves decides to propose formally to her, which elicits a hearty “Thank Heaven!”
Nudity:
No nudity (woman in a bathtub talks to her sister)
Alcohol Use:
In several scenes people are shown drinking alcohol Smoking and or Drug Use/Abuse: Three scenes depict smoking; and,
Miscellaneous Immorality:
Gambling, jealousy, betrayal.

GIGI is a joyous, touching American musical classic set in 1900 about a teenage girl from a poor family in Paris who’s being groomed by her great aunt to be a mistress to rich men but attracts the attention of a wealthy family friend when she comes of age. In GIGI, the rich man eventually decides not to take the girl as his kept mistress and proposes marriage to her instead, a decision that’s validated with a hearty “Thank Heaven!” by the girl’s grandmother.

Based on a racy story by the French writer Collette and a 1949 French movie, GIGI opens up in the illustrious gardens of Paris where the narrator, Honoré Lachaille (played by Maurice Chevalier), speaks about marriage and the types of people who fall into it or avoid it. He then sings a song about girls maturing into young women. Honoré is the uncle of a rich playboy named Gaston, the bored heir to a sugar fortune.

Gigi is a young socialite in training, who lives with her grandmama and her mother, who performs small roles at the opera. Grandmama wishes for her to do nothing more but to see Gigi get educated and learn how to be a lady and attract the eye of some man who can support her. So, she sends Gigi to school along with her Tuesday meetings with her great aunt, Alicia, in her lavish apartment to learn the proper manners of a lady. However, Alicia, who’s had many lovers in her life, is also intent on making sure Gigi knows how to please a rich man and how to know when a man gives his girlfriend real jewels or phony pearls.

For her part, Gigi is astonished about all this fuss over love and romance. After singing a song at how she doesn’t understand the Parisians’ obsession with love and romance, she runs into Gaston. Gaston convinces her to come with him to the fancy ice-skating rink where his socialite mistress, Liane, is taking skating lessons with her handsome instructor. Gigi recalls that she must return home and leaves. Gaston and Liane then go to the club Maxine’s. As they dance together, Gaston grows suspicious of Liane’s behavior. A couple days later, he tells Honoré that he’s found out that Liane is cheating on him with her instructor. Honoré convinces Gaston to go to the hotel where they’re staying and pay the instructor 1000 francs to stop dating Liane and leave Paris and, at the same time, publicly break up with Liane. That weekend, Liane pretends she’s so devastated that she wants to commit suicide, “a case of insufficient poison,” says Great Aunt Alicia.

Honoré tries to take Gaston’s mind off the whole sordid affair by introducing Gaston to other girls and hosting grandiose parties. After a while, this too bores Gaston, and he ends up at the apartment Gigi shares with her mother and grandmother. They convince Gaston to skip that night’s party and visit with them. Gigi and Gaston happily play cards together while Gaston teases her. After Gigi wins a card game, Gaston promises to take Gigi and Grandmama to the beach town of Trouville.

In Trouville, Gaston and Gigi enjoy one another’s company playing in the surf, playing a game of tennis and riding donkeys. Meanwhile, Grandmama and Honoré reminisce about their romance years ago. Their memories elicit the wonderful reflection song titled, “I Remember It Well,” which is a song that everyone should hear again and again.

When Grandmama and Gigi return to Paris, Aunt Alicia has a fit when she finds out that Gaston spoiled Gigi so much. However, she learns that Gaston has left for an extended stay on Monte Carlo, which will give them time to train the awkward Gigi to become Gaston’s official mistress.

However, when Gigi enters the room wearing an exquisite white dress, Gaston gets angry and mocks her, saying, “You look like an organ grinder’s monkey!” mocks her, and Gigi tells him she didn’t realize Gaston had any taste in clothes. Gaston then leaves the apartment yelling at Grandmama, but he immediately returns, apologizes and invites Gigi to tea at Versailles. However, Grandmama refuses to let Gaston take her. She tells Gaston that, if he takes her alone to tea, Gigi will be labeled forever by society. She tells him she will only entrust Gigi to a man who can say, “I will take care of her. I will answer for her future.” This just angers Gaston again, and he leaves. However, while wandering the beautiful Parisian streets, he sings of his sudden realization that Gigi has become a beautiful mature woman, and he’s in love with her. So, he returns to the apartment to speak with Grandmama.

Cut to Grandmama telling Aunt Alicia that Gaston is prepared to set up Gigi with her own house, a car, chauffeur and servants. Gaston has assured Grandmama that he will spoil Gigi as no other woman has been spoiled. That night, Gaston shows up at the apartment, but Gigi is scared that she’ll end up in the tabloids and eventually become just another discarded mistress like Liane and Gaston’s other girlfriends. “That won’t do for me,” she says. Gaston tells her he’s fallen in love with her, but this just enrages Gigi, who calls him a wicked man for his willingness to subject her to the life of a courtesan, a kept woman. Gaston storms out of the apartment, accusing Grandmama of warping Gigi’s mind and neglecting to teach her about “kindness, sweetness, benevolence, and tender hearts bulging with generosity.”

It looks like Gigi won’t be seeing any more of Gaston. Or, will she?

Directed by Vincente Minelli, with an assist by Charles Walters, GIGI is a classic masterpiece filled with the glamour of a bygone era. The cinematography, music and direction capture the beauty of Paris and the elegance of the Belle Epoque in France, a Golden Age between the end of the Franco-Prussian War in 1871 and the start of World War I in 1914 that resulted in advances in business, art and science, including the Eiffel Tower and the Statue of Liberty. The cast is led by a trio of expatriate French actors, Leslie Caron, Maurice Chevalier and Louis Jordan, and two veteran English actresses, Isabel Jeans and Hermione Gingold. All the songs are memorable, but the title song, performed by Louis Jordan as he walks through some streets, parks and gardens in Paris, is one of the great musical combinations of cinematography, performance and direction. The rest of the movie, however, also blossoms with emotional highlights and joyous moments. Everything leads to an uplifting celebration of marriage that begins with a hearty, “Thank Heaven!” Also, at one point, Gigi asks for prayer, and at another point, a reference is made to the “miracle” of growing up as a woman. Thus, despite the movie’s mature themes, it has a light but definite Christian, moral worldview. GIGI is a four-star delight, but MOVIEGUIDE® advises caution for older children.