"Keeping Secrets Can Have Terrible Consequences" 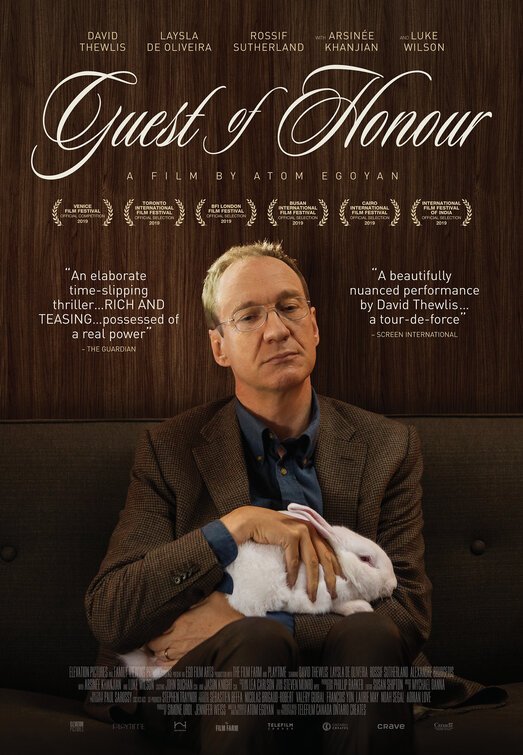 GUEST OF HONOUR is a complex Canadian drama about a health inspector’s relationship with his guilt-ridden daughter. The movie opens with a Catholic priest discussing the funeral services for the health inspector with the man’s adult daughter. Veronica tells the priest her life story, including her relationship with her father. As a child, Veronica discovers a disappointing secret about her father. The discovery causes her to do a really bad thing to get back at him. Later, Veronica ends up going willingly to jail when she pulls a prank on a school bus driver with a student she teaches in a high school orchestra.

Ultimately, GUEST OF HONOUR shows how keeping secrets can make matters worse. A secret between her mother and father causes Veronica to do a bad thing that has tragic consequences later. GUEST OF HONOUR is structured in an intricate way that’s rewarding. However, the movie is sometimes slow going and occasionally too cryptic. The writer/director seems to pull his punches. GUEST OF HONOUR also contains strong foul language and an implied suicide. So, MOVIEGUIDE® advises extreme caution.

(C, B, Pa, LL, V, S, N, AA, D, M):
Dominant Worldview and Other Worldview Content/Elements:
Light Christian morality includes a priest applies some grace to a sad situation, a woman reveals she’s doing penance for a crime she committed as a young girl, and a woman tells her perplexed father that he bears responsibility for both the bad and the good she’s done (this is a definite truth in one sense, but the woman comes across as too accusatory and unable to overcome her bitterness), plus there are some references to luck
Foul Language:
12 “f” obscenities, one “s” obscenity and one JC profanity
Violence:
Implied suicide when woman opens bathroom door and dead young man is shown lying in bloody bathtub water, man finds rabbit dead in its cage, and later it’s implied that a restaurant chef is chopping off the rabbit’s feet as a “lucky” souvenir for the man, minor scuffle in a hallway between an adult man and a teenager, drunken man makes a threat in front of other people, and a child doesn’t report a fire that ends up taking someone’s life
Sex:
Man hears sounds of sex coming from next hotel room, man takes a young female teacher’s smartphone and sends a lewd text to one of her 17-year-old students, and it’s revealed that a man’s dying wife agreed to let him have an affair with another woman that he seems interested in marrying after the wife dies (the married couple has a child, and it’s implied that the mother approves in the woman becoming the child’s stepmother later)
Nudity:
Images of upper male nudity, and an image of young woman in her panties
Alcohol Use:
Man regularly drinks wine and appears rather drunk in one scene
Smoking and/or Drug Use and Abuse:
Brief smoking but no drugs; and,
Miscellaneous Immorality:
Lying and a health inspector man spreads rabbit feces in restroom to blackmail a restaurant owner into letting him talk with the man’s son about an issue involving the health inspector’s daughter, who used to be the son’s high school orchestra teacher.

GUEST OF HONOUR is a complex Canadian drama about a health inspector’s relationship with his guilt-ridden daughter, who causes trouble when she finds out her father is having an affair with her music teacher while her mother’s dying, and later when a school bus driver makes trouble for her on a musical tour with her high school orchestra students. GUEST OF HONOUR shows how keeping secrets can cause people to make matters worse, but the movie is sometimes slow going, is a little too cryptic at times and contains some strong foul language and other immoral behavior.

The earliest period is when Veronica turns 9-years-old. Jim gives her a rabbit as a pet, which Veronica names Benjamin. She also starts piano lessons with a woman named Alicia, who has a boy Veronica’s age, Walter.

A year or so later, Veronica’s mother is dying of cancer, and Veronica and Walter give a recital while Alicia and Veronica’s parents watch from the audience. Veronica finds out a secret that makes her do something really bad.

The next period is a brief one and isn’t shown until about midway into the story. A short scene shows Veronica and Walter as young adults living together, with Veronica breaking up with Walter, and Walter mentioning that his mother, Alicia, died in a terrible fire. The scene right after that shows Veronica coming home, watching an urgent phone video message from Walter and then finding that Walter has committed suicide in the bathroom.

Several years later, Veronica is working as an orchestra teacher at a high school. The student orchestra is making a performance tour under Veronica’s leadership, while riding in a bus driven by a young bearded man named Mike. One of the students, a 17-year-old boy named Clive, has eyes for Veronica and wants her to have dinner with him. Although she refuses, Mike, who also finds Veronica attractive, sees the interaction between Veronica and Clive and becomes jealous. One day on the tour, while the band’s playing a concert, Mike takes Veronica’s phone and sends a sexy text message to Clive. Clive and Veronica easily figure out who sent the text. They decide to play a prank on Mike, but the prank gets out of control and Veronica ends up going to jail for taking advantage of her students. Although she’s really innocent of the specific charges against her, Veronica pleads guilty and willingly goes to jail.

The final, most lengthy, period shows Veronica’s father, Jim, doing his job as a health inspector of restaurants and other places serving food. He’s taking care of Veronica’s rabbit while she’s in jail. The rabbit is now 15 years old. Meanwhile, Jim visits Veronica in jail and tries to convince Veronica to ask for early release, but she refuses. She tells Jim she wanted to go to jail for two reasons. First, because holding a trial would mean that her students would have to testify. Second, she tells Jim that she deserves to be in jail.

The rest of the movie shows Veronica explaining to the priest, and the movie showing through the flashbacks, why Veronica feels she deserves to go to jail. Eventually, viewers learn that Veronica’s discovery of a secret between Veronica’s father and mother and Veronica’s piano teacher led directly to all the tragic events that followed later, including Alicia’s death, Walter’s suicide and Veronica’s decision to prank the bus driver, with help from Clive and Clive’s best friend. The connection between all these events has a profound effect on Jim, personally and professionally.

Ultimately, GUEST OF HONOUR shows how keeping secrets can cause people to make matters worse. Eventually, the priest that Jim asked to perform his funeral reveals to Veronica that he has a missing piece of the puzzle which explains how Jim ended up asking that his funeral be conducted at the priest’s church.

GUEST OF HONOUR is a family drama, but it’s also a mystery. There are three mysteries. First, why is Veronica in jail? Second, why does she feel she deserves to be in jail? Finally, why did Veronica’s father want the priest to perform his unreal service in the priest’s church, especially since the father wasn’t really a churchgoer? The movie slowly reveals the answers to these questions, in that order. The answer to the second question is rather shocking, but the director downplays its emotional impact.

Although GUEST OF HONOUR is structured in such an intricate way that it’s rewarding to ponder and examine all the pieces to the puzzle of its story, plot and characters, the movie is sometimes slow going. Also, it’s occasionally too cryptic, especially at the very end, which shows Jim walking through one of the restaurants he inspects, with a slight, cryptic smile on his face.

The Catholic priest’s revelation at the end, along with the movie’s themes of guilt, penance and grace, turn GUEST OF HONOUR into a Christian morality tale. As noted above, Veronica’s father keeps a secret from her when she was a child that has repercussions for both of them later in life. Late in the movie, Veronica tells her father that he’s responsible for the bad decisions she’s made in her life, as well as for her decision that she deserves to be in jail because of bad things she has done. However, she also tells him he’s also responsible for some of the good things about her. Even so, her bitterness about the bad seems very strong, if not a little bit self-righteous.

All in all, GUEST OF HONOUR is not as satisfying as it should have been. Although some positive lessons can be derived from the story it tells, it’s too cryptic and slow. Also, the ending is rather downbeat. The writer/director, an acclaimed Canadian filmmaker, seems to pull his punches. This can be frustrating for moviegoers who prefer something less lukewarm. Finally, GUEST OF HONOUR has some strong foul language, an implied scene of suicide and other immoral behavior. So, MOVIEGUIDE® advises extreme caution.

A big flaw in the movie is that, although Veronica’s father tells her about some of the things he’s been doing while she’s in jail, she couldn’t possibly know many of the things the movie shows him doing during that period. So, how could she tell the priest about it?