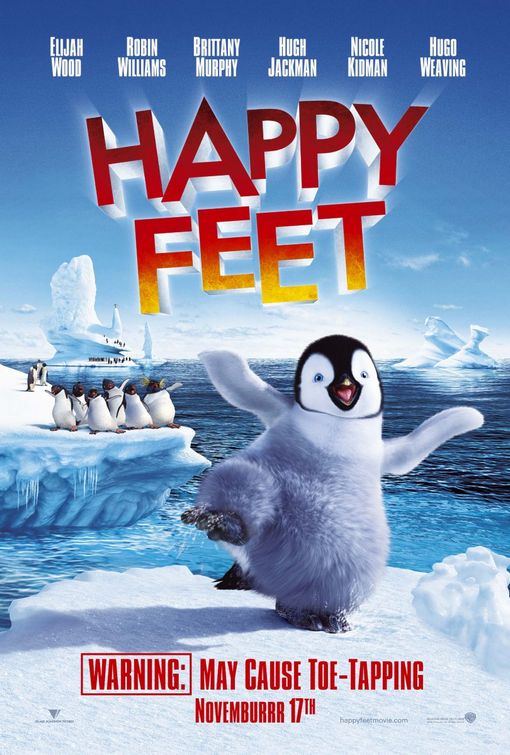 In HAPPY FEET, a new animated comedy, Mumble the Emperor Penguin does not have a singing voice like the other penguins, but boy can he dance! A misfit, Mumble is excluded from the rest of penguin life, which also causes problems with Gloria, his love interest. When Mumble runs into a human construction vehicle and hears about alien human researchers abducting birds, he begins to question the world as he knows it. When human garbage threatens the life of another penguin, Mumble goes on a journey to find the "aliens." The movie stars the voices of Elijah Wood, Robin Williams and Nicole Kidman.

HAPPY FEET contains some strong moral elements extolling truth, perseverance, dedication, determination, and self-sacrifice. Its worldview, however, is strongly Romantic about looking inside yourself, finding the true song in your heart, and being true to who you are. It also contains very strong environmentalist content, with humans being seen as a negative influence on the world. While there are many adorable and inspirational moments to this movie, they are overshadowed by the environmentalist propaganda present throughout. Overall, this film will be a disappointment to anyone who is hoping otherwise.

(RoRo, EEE, BB, C, Pa, O, L, VV, S, M) Strong Romantic worldview involving looking inside yourself, finding your heart song, and being true to who you are ("the voice you hear inside is who you truly are”), with very strong environmentalist content, some strong moral, and light redemptive elements noted in sacrifice of self for greater good, plus New Age pagan sentiments as penguins worship the Great Guinn, a female penguin deity that is ultimately found to be faulty and that involves a fake occult psychic who is also exposed; a couple uses of the word "butt," plus rude humor mostly in the form of name calling such as idiot, and fool; four scenes of violence, two include birds who intend to eat or harm Mumble, the tapping penguin, one long and intense scene of a chase between main character and a leopard seal, and killer whales try to consume Mumble and his friends; some light off-color sexual humor including double entendres; and, movie opens with stars, the sun and then the world, possibly alluding to evolution, and father agrees and encourages son to adapt to normal penguin behavior or leave.

HAPPY FEET is Warner Brother’s newest animated comedy starring a penguin, Mumble, voice by Elijah Wood, who is born with no singing voice. Instead, his heart song is shown in tapping feet, which he calls happy feet. In a colony of Emperor Penguins who find a mate by their own individual song, without a song Mumble fears he will spend his life alone. His mother, Norma Jean, voiced by Nicole Kidman, finds his difference endearing, but his father, Memphis, voiced by Hugh Jackman, disapproves, along with the rest of the penguin colony.

Mumble is forced to tap dance in private to avoid criticism and embarrassment. He is not allowed to graduate with his class and is excluded from much of the penguin life. His closest friend is Gloria, voiced by Brittany Murphy, who is also his love interest. She is born with a voice that is admired by all the penguins, but even she is torn between being accepted or risking ostracism to follow her heart.

Mumble hears about a group of aliens, clearly human researchers, from a bird who tells of his experience of being abducted by aliens. This experience, mixed with his discovery of a construction vehicle, causes Mumble to question the world as he knows it. As Mumble tries to make sense of all the information presented to him, he falls upon a group of penguins. These penguins are more accepting of Mumble and actually admire his tapping ability. They decide to “party” together. Enter Ramon, the leader voiced by Robin Williams. This group has a barrio feel, right down to the Hispanic accents and lingo.

As Mumble shares his questions, his new friends lead him to Lovelace (also voiced by Robin Williams), the self-proclaimed guru, who knows all and allegedly can see the future and given power by a magic band bestowed upon him by the gods. Mumble identifies Lovelace as a fake with garbage around his neck. This garbage threatens the life of Lovelace, and Mumble decides to make the journey to find the aliens.

This last segment of the movie shows self-sacrifice and commitment to a purpose that is bigger than oneself. It also shows the integrity of seeking truth, even when ridiculed for doing so. On his journey, Mumble shows perseverance, dedication, determination, and self-sacrifice.

Regrettably, the movie doesn’t stop at the pursuit of truth but rather seems to define truth in an environmentalist perspective with humans being a negative influence on the world. In one scene, apparent politicians seem to be arguing about fishing in the Antarctic regions surrounding the penguins. While there are many adorable and inspirational moments to this film, they are overshadowed by the political propaganda that is present throughout. Overall, this film will be a disappointment to anyone who was really hoping otherwise.