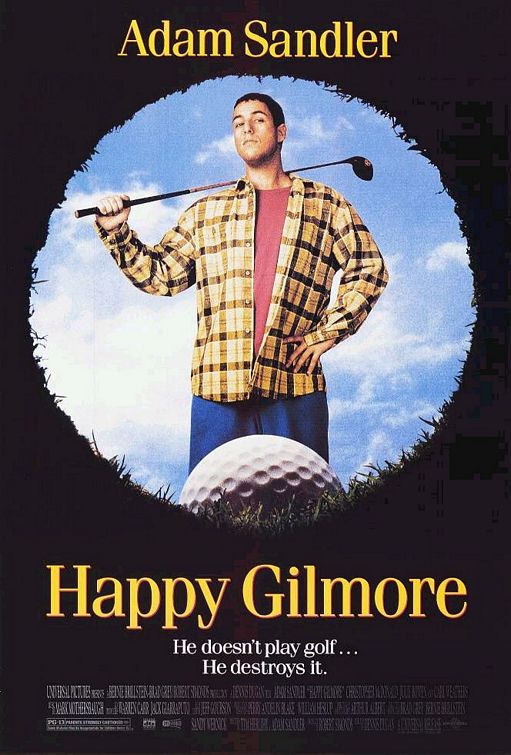 HAPPY GILMORE is a happy comedy from Saturday Night Live alumni Adam Sandler. This is a tale of a young hockey player who competes in professional golf to win money for his grandmother. Though good natured with a moral theme, it has lots of slapstick violence, some sexual innuendo and a good helping of foul language.

HAPPY GILMORE is a happy comedy from Saturday Night Live alumni Adam Sandler. Happy is a hockey player who can’t skate and can’t pass but has a mean slap shot. He doesn’t make the team, his girlfriend leaves him, and his grandmother is getting kicked out of her house. He needs $250,000 in 90 days or her house is gone. On a bet, Happy learns he can drive a golf ball 400 yards. He is trained by an old golf pro and joins a match. Happy comes in last, but is able to make a little money for his Grandmother. Happy joins other matches, getting a little better and making a little more money each time. He is becoming a media darling, with crazed hockey antics on the greens, superlong drives and a visible rivalry with the number one pro named Shooter. The movie concludes with Happy and Shooter, shooting it out for Grandma’s home.

HAPPY GILMORE is a juvenile comedy. It has lots of slapstick violence, some sexual innuendo and a good helping of foul language. Among silly comedies, HAPPY GILMORE takes the high road thematically and makes the protagonist’s conflict a noble fight. He is fighting for his Grandmother and her home. The mood is usually light and never mean-spirited. There are no new lows explored in tastelessness in the film. HAPPY GILMORE is a likeable comedy, but it does have some of the usual offensive elements of modern comedies.