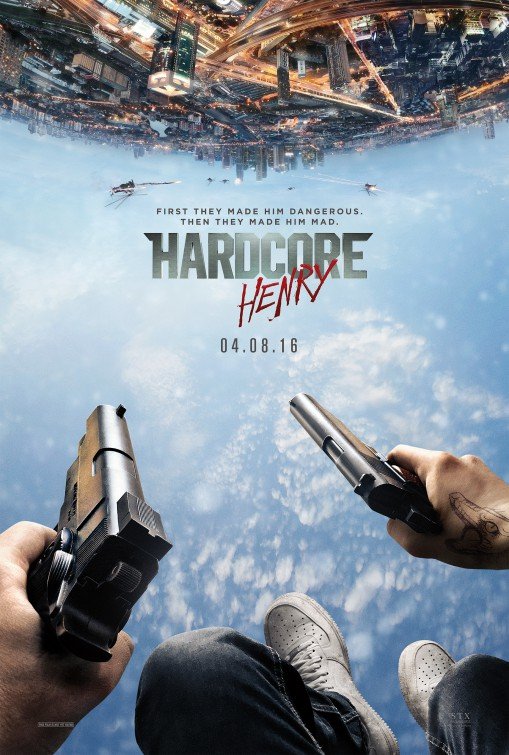 HARDCORE HENRY opens with a credit sequence of people being killed or mutilated in gruesome ways, in slow motion. It jumps to a futuristic operating room. There, a man named Henry is brought back to life and fitted with a mechanical arm and leg. Estelle, the nurse, says she’s Harry’s wife and loves him. Suddenly, a blonde-haired villain bursts in and threatens their lives. Harry and Estelle escape, but Harry loses Estelle. For the rest of the movie, he dodges constant bloody attacks by the villain’s numerous henchmen, some of whom also appear to be cyborgs like Harry.

HARDCORE HENRY is shot like a first-person shooter video game. So, it will induce motion sickness in half or more of the moviegoers who see it. It’s also a bloody mess, with a story that’s almost totally confusing until about halfway through, when the villain’s scheme involving masses of cyborg soldiers is revealed. HARDCORE HENRY is ultraviolent, with virtually an utter absence of humanity, character development and morality. It contains lots of strong foul language and a scene set in a brothel with half-naked women.

(PaPaPa, B, LLL, VVV, SS, NN, DD, MM) Very strong pagan, nihilistic worldview with very light moral elements against a totalitarian villain with kinetic powers who wants to take over the world for some reason, but tinged with a brutal, violent and even sadistic attitude; at least 61 obscenities, six strong profanities and seven light profanities; non-stop, frequently extreme, graphic, gory, and bloody violence includes many head shots with blood spurting, some heads and parts of heads and other body parts blown off, slow-motion credit sequence shows (among other ultraviolent images) knife piercing man’s neck and coming out the other side, man stabbed in eye, gruesome images of corpses, people open up gory chest cavities of two or more cyborg characters to retrieve mechanical mechanisms or electrical wires, man’s spine is deliberately broken, explosions, car chases, gunfights, limbs broken, hand-to-hand combat, people tossed around like ragdolls, villain has telekinetic powers like something out of STAR WARS, lots of jittery and sickness-inducing running and jumping and shooting, armies of men attack; extensive scene in a strip club and brothel where half-naked women walk around while characters talk a lot, run around and fight (includes shots of men in rooms with some of the half-naked women and shots of some of the women briefly coming up closely to the protagonist and curiously looking at him), lightly implied fornication between two characters, who are seen kissing in a later scene set in the woods, and a semi-nude photo of a woman in another scene; multiple shots of upper female nudity and some upper male nudity; alcohol use; smoking and man snorts cocaine; and, strong miscellaneous immorality includes wanton destruction of people and property, stealing, the cruel intentions and taunts of the main villain against the “hero,” and a ruthless betrayal.

HARDCORE HENRY is an almost plot-free, horribly annoying, ultraviolent science fiction movie shown through the eyes of a man named Henry brought back to life as a half-man, half-robot and sent on a rampage to stop an evil villain set on taking over the world. HARDCORE HENRY has a strong pagan worldview and is vile on almost every possible level.

The movie opens with Henry attached to wires and immersed in a tank of water, with tubes hanging out of his body. A beautiful woman named Estelle pulls the cords out and tells him she’s his wife, though he has no memory of her and can’t speak. Just as she attaches his robotic arm and leg to replace amputations, a team of gunmen led by Akan, a mysterious, wacko blonde-headed villain with telekinetic powers, bursts into the room and threatens to shoot them. Estelle gives Henry a command to kill, and he springs into action before taking her onto an escape pod that hurtles from the sky down to a crash landing on an earth highway.

From there, Henry is an unstoppable killing machine. In short order, he loses track of Estelle when some Russian gunmen attack, and it quickly becomes clear that Henry is really in Russia. A man named Jimmy, dressed like a secret agent, helps Henry escape but is killed. Then, the man’s shaggy double, also named Jimmy, picks Henry up via a cell phone and, before he also dies, orders Henry to go kill a man, open up his chest and take out an electronic device. It turns out that Henry will need the device to power his robotic machinery, including parts of his face, which is never shown.

HARDCORE HENRY is shot like a first-person shooter game, in a tale involving armies of cyborgs, men who are half robot and half human. Except for the constant violence and heavy body count, the confusing plot turns out to be virtually non-existent. A series of twists begin to clear up the confusion, but the frenetic camera work is literally sickening, not to mention unrealistic (eyes don’t move like the camera moves in this movie; they actually stabilize your sight, even if you move around a lot [unless you deliberately try to make yourself dizzy by spinning around]). Thus, it isn’t until about halfway through the movie that the villain’s plan comes into focus, although the ultimate purpose behind his desire to take over the world is never explained. To make matters worse, the first-person perspective actually does the opposite of bringing the viewer into the action. In reality, it drives the viewer away, including the action-loving MOVIEGUIDE® reviewers who saw this movie.

Furthermore, HARDCORE HENRY never really takes the time to explain what the madman wants, other than to dominate society and crush innocents without mercy. Henry relentlessly pursues him, only to find he’s double-crossed, betrayed and stopped at almost every turn.

There’s also no explanation given as to why the villain has levitating powers. This is a huge omission that makes the villain’s persona stupid and off-putting rather than compelling. Furthermore, with no visual about who Henry is and no real back-story to him other than an utterly senseless flashback or flash forward (it’s hard to tell), it’s impossible to care about Henry.

That lack of caring combines with a virtually utter absence of humanity, character development, morality, and ethics on the part of the filmmakers. Every human being here is meant to be pushed aside, crushed, pummeled, and otherwise obliterated, and the women who survive are subjected to just being naked rag dolls or deceptively evil betrayers. Only Sharlto Copley, who [SPOPILER ALERT] energetically and humorously plays a series of quirky cyborgs named Jimmy, comes across as interesting or entertaining. While watching HARDCORE HENRY, MOVIEGUIDE® increasingly wished the movie was about these characters instead of the first-person cyborg who couldn’t speak.

Nihilistic and vile to the extreme, and thoroughly unpleasant to watch in addition to being virtually impossible to follow, HARDCORE HENRY takes its place as one of the worst, most brain-melting and callous movies ever made. Media-wise viewers will consider it a must to avoid, artistically and morally.