HE NAMED ME MALALA 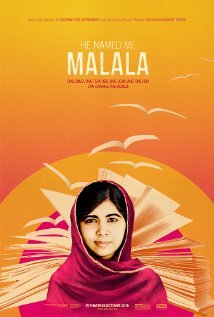 HE NAMED ME MALALA is a documentary about the young Pakistani teenager who survived a near-fatal shooting by Muslim Taliban terrorists in October 2012. For several years, encouraged by her father, Malala became known as an international speaker in favor of education for children around the world, especially girls. Amazingly, 15-year-old Malala survived the 2012 shooting, though her wounds damaged the hearing in her left ear and paralyzed part of the left side of her face. The rest of the movie tells what happened after her recovery.

HE NAMED ME MALALA is informative and engaging, but it’s not as dramatic as it could have been. Although the movie says Malala remains a Muslim, she speaks out against Muslim radicals like the Taliban, especially their efforts to destroy schools for young girls. That said, her support for education of children is general and rather vague. What kind of education? Education to do what? Ultimately, HE NAMED ME MALALA has a strong Romantic, liberal, worldview and agenda. So, MOVIEGUIDE® advises caution. Malala and the filmmakers of HE NAMED ME MALALA should be more specific.

(RoRo, PC, Fe, FR, BB, So, Cap, L, V, MM) Strong Romantic, somewhat liberal and lightly feminist, worldview promoting in a general and vague way, with few details, access to “education” for all boys and girls, especially girls, throughout the world, plus movie reports girl and her family are Muslim, but it also speaks out against Muslim radicals, terrorism and political violence, so there’s a solid moral component, though movie again is rather vague on details and provides no God-centered argument for morality or even its definition of education, plus some possible implied socialism that seems balanced, however, by a more definite implied capitalism (also, there’s a brief mention of “God” and one mention of Allah, plus Muslim calls to prayers are heard once during a brief scene shot in a Pakistani city); no obscenities but one light Oh, G-d profanity; light violence includes some animated violence when relating the history of a battle in the 1880s, animated bombings, explosions in the distance, discussion of a disturbing attempted Muslim terrorist assassination of an outspoken female teenager that also wounded two other teenage girls, some very light bloody images of a wounded girl being wheeled into an ambulance, hospital and operating room, and discussion of Islamic Taliban terrorists bombing schools in Pakistan; no sex but teenage girl is bashful about finding a cricket celebrity handsome and seeing photos of him, Brad Pitt and other male celebrities on the Internet and girl is briefly questioned about boys but she’s embarrassed to discuss her interest in boys, but there’s nothing salacious; no nudity; no alcohol use; no smoking or drugs; and, discussion of an evil Islamic Taliban leader’s attempt to control an area in Pakistan, a mention of “fate,” and documentary is a little too vague about the agenda of its title subject and her father, who may or may not have been more explicit with the filmmakers behind the scenes or off camera.

HE NAMED ME MALALA is a documentary about the young Pakistani girl who survived a near-fatal shooting by Muslim Taliban terrorists in her hometown but survived to tell her story and promote education for all people, especially children.

Occasionally visiting her family’s new home in Birmingham, England, the movie discusses Malala’s current advocacy efforts for children’s rights to “education.” Her efforts for children’s education, especially education for young girls, are mentioned in general terms. The movie includes brief interviews with her mother and two brothers. However, Malala seems closest to her father, who founded a chain of schools for boys and girls in their hometown area of the Swat Valley in Northern Pakistan and who inspired Malala’s love for education. Her father also encouraged her to speak out in favor of education for girls, which enraged local Taliban leaders who, according to the movie, have bombed more than 400 schools in the area in recent years. In October 2012, 15-year-old Malala was shot in the head by a Taliban assassin while she traveled home from school on the bus. Amazingly, Malala survived the shooting, though her wounds still cause her pain, damaged the hearing in her left ear, and partially paralyzed part of the left side of her face.

As the movie shows some of Malala’s current activities, it chronologically relates her story from her birth in 1997 to her winning the Nobel Peace Prize in 2014, and beyond. The movie opens by telling viewers that her father named Malala after a girl in the 1880s who, while aiding wounded rebels during a battle with British soldiers, saw the rebels losing their morale and grabbed a flag to rally the rebels, only to be shot down by the British. Pakistani nationalists believe the girl’s sacrificial bravery helped the rebels win the battle.

Though her father inspired and encouraged Malala’s activism, Malala says it ultimately was her choice to start speaking out against the Taliban’s opposition to education for girls. Reportedly, the alleged gunman who shot her is still at large, and the local Pakistani Taliban leader who ordered Malala’s assassination has fled to Eastern Afghanistan.

HE NAMED ME MALALA includes some lighthearted interviews with the family, including Malala’s two younger brothers, who try to make sure Malala doesn’t become too conceited because of all the international adulation she receives. At another point, Malala is clearly embarrassed about her adoration of a handsome cricket player. During this scene, one brother sarcastically notes that the player is not as good as he used to be. His comments provoke a chuckle.

NAMED ME MALALA is informative and engaging, but it’s not as dramatic as it could have been. For example, Malala’s story should have been constructed into a three-act structure. The first turning point is the assassination attempt on her life, followed by her recovery, then the beginnings of her post-operative international notoriety and activism. In 2013, Malala was considered for the Nobel Peace Prize, but they gave the prize to someone else that year. So, the movie’s third act could then have focused on the drama of whether Malala was finally going to get the 2014 Nobel Peace Prize, with the climax being her victory and its resulting benefits to herself, including the creation of her international charity and the movie’s brief scenes of her visiting Syrian refugees fleeing from the Muslim terrorist group known as the Islamic State.

Although the movie says Malala remains a Muslim, she speaks out against Muslim radicals like the Taliban, especially their efforts to stop education of young girls. However, the movie mostly focuses on how Malala sees education as a panacea for global reform. Of course, if you educate a child’s mind but not his or her heart, soul and moral conscience, all you will get is an educated barbarian.

Interestingly, there’s a notorious communist group, the International Marxist Tendency (IMT), which claims Malala attended their “Marxist Summer School” in Pakistan several months before she was shot in October 2012. IMT claims Malala sent them a letter reiterating her commitment to Marxist socialism and thanking them for “introducing me to Marxism and Socialism” (http://www.marxist.com/historic-32nd-congress-of-pakistani-imt-1.htm). MOVIEGUIDE® could find no confirmation of IMT’s claim regarding Malala, and Malala’s own blog says nothing specific about her political ideology, or even her views on Islam and religion. That said, her father reportedly is a member of the Awami National Party in Pakistan, a secular left-wing party that supports “democratic socialism.”

Be that as it may, Malala and the movie’s advocacy for child education is rather general and vague without many, if any, meaningful (much less insightful) details. As indicated above, it’s kind of a Romantic, somewhat liberal and feminist view of education. So, setting aside Malala’s possible political and religious views, the movie leaves viewers with some huge questions, such as: What kind of education? Education in what? Education for what? Of course, education to learn how to read and to learn how to do math and science seem to be a given, but the documentary doesn’t specifically mention those types of basic education. Thus, more details would have been extremely helpful to viewers, and the filmmakers, not to mention Malala and her parents, should have been more explicit about what they mean when they say education.

Even so, according to the movie’s production notes, Malala and her family have established the Malala Fund, an organization focusing on “empowering girls” by promoting safe access to a full 12 years of education. The notes add that the Fund supports “international, national and local policy changes that will improve girls’ safe and affordable access to education.” The Fund also focuses on areas where girls are most in need of education, such as Nigeria, Pakistan and countries with Syrian refugees. These, of course, are areas that have been affected by Islamofascist terrorism and tyranny, so, in that respect, HE NAMED ME MALALA can be seen as a positive work that supports a nonviolent response to such Islamofascist evil.

All in all, therefore, MOVEIGUIDE® advises caution for this documentary because of its Romantic, vague generalities and its apparent belief that a moderate type of Islam can be a positive force for good or be reformed sufficiently to support a general democratic, albeit liberal, view of education and its benefits. Despite her father’s possible socialist leanings, the movie doesn’t overtly promote socialist values, though it does seem to favor national and international government action to make education safe and affordable for all people, not just young girls and boys. It also, however, seems to support individual capitalist actions like the father’s establishment of his own chain of schools in Pakistan.

Rent or Buy HE NAMED ME MALALA: