"Searching for the Meaning of Love" 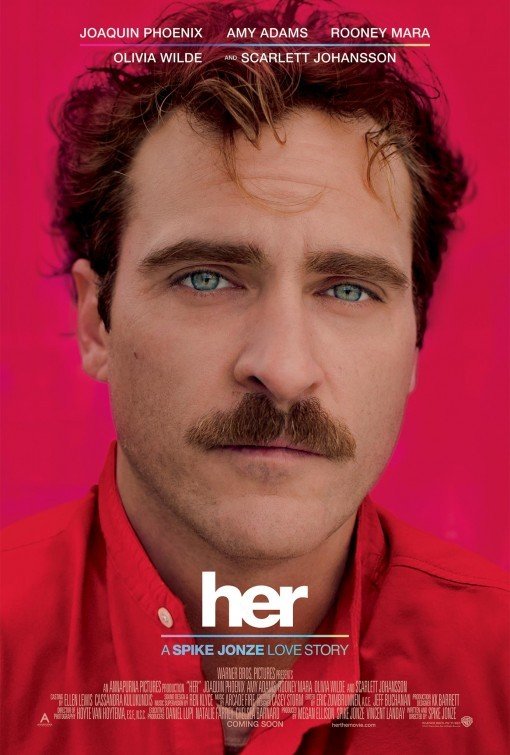 HER is a strange science fiction movie with dramatic and comical moments. It’s set in a near-future Los Angeles, where citizens have better electronic gadgets but emptier lives and poor human interaction. The movie follows the story of a sad-sack Everyman named Ted. Ted is in the midst of divorce proceedings. He gets paid for writing letters for other people. These letters seem heartfelt, but in fact are invented by him at the request of clients. Eventually, Ted falls in love with his computer new artificial intelligent operating system, which talks to him in a sultry female voice. This leads to some strange complications.

HER is very well written and acted, despite its strange elements. It insightfully explores issues like love and heartbreak, loneliness, and the dangers of our technologically absorbed society. However, it comes at these issues from a humanist viewpoint, although that is mitigated by some moral elements and even touching moments. HER also contains lots of strong foul language, some strong lewd content, and brief nudity. So, MOVIEGUIDE® advises extreme caution for HER, despite its insightful commentary.

(HH, B, LLL, S, NN, AA, M) Strong humanist worldview with some moral elements, including man is finally able to apologize to his ex-wife and relate better to people; at least 60 obscenities and profanities (including many “f” words); no violence; strong sexual content includes crude phone sex scene involving at the end a sadomasochistic twist from the phone sex woman, which repulses the man, and graphic discussion of another phone sex scene between man and his artificially intelligent computer operating system’s female voice, woman offers to “surrogate” for man and the operating system, but the bedroom scene doesn’t work out, and other minor sexual references; upper male nudity and woman in bra and underwear in bedroom scene; alcohol use and drunkenness; no smoking or drugs; and, man has desires for his computer’s sultry female voice, people are disconnected from one another due to technology, and man denies he has psychological problems or flaws or had anything to do with his failed marriage but later sends ex-wife a letter of apology and begins to have a potentially better relationship with a real human woman.

HER is a science fiction movie with dramatic and comical moments about a disconnected man who’s so lonely he falls in love with the artificial intelligence controlling his computer’s operating system and its female voice. HER has a strong humanist worldview mitigated somewhat by moral, redemptive elements where the lead character learns to forgive his wife and become a better man and communicator. There’s a lot of strong foul language and some strong lewd moments, however.

The latest film by writer-director Spike Jonze (ADAPTATION, BEING JOHN MALKOVICH), HER is an often poetic and thoughtful exploration on the nature of love that is by turns very funny and very sad, yet always fascinating to watch. It’s set in a near-future Los Angeles, where citizens have better electronic gadgets but emptier lives with poor human interaction. The movie follows the story of a sad-sack Everyman named Ted (Joaquin Phoenix), who’s in the midst of a divorce and gets paid for writing letters for others – letters that seem heartfelt, but in fact are invented by him at the request of clients.

With his extreme emotional disconnection from almost everyone around him, Ted is desperate to bond with almost anyone. He buys a new kind of computer Operating System (OS) that has artificial intelligence, meaning it can absorb a few facts about its owner and then interact in seemingly natural conversations. He chooses a female voice (played with stunning expressiveness by Scarlet Johannsen), who names herself Samantha. Ted quickly realizes she’s far more able to converse than he ever imagined. Soon, they are having unseen, yet heard, phone sex in one scene.

Those conversations help Ted break out of his emotional prison and re-embrace life. When his heart is broken again by a bad date with a real woman, the movie gets really strange yet still remains effective. For it is here that Ted realizes he’d rather fall in love with his operating system’s computerized voice and mind than a real person. This sets off an emotionally complex tale where the boundaries and meaning of love and sex are explored in rich and thoughtful, yet still often funny detail. While things get weird along the way, HER winds up with a moral and touching resolution and a beautiful message of forgiveness.

Jonze draws beautiful images of Los Angeles, and an astounding performance from Phoenix that could earn an Oscar nomination for him if not the award. It’s a performance of rich emotional range and also one where he makes what could be a ridiculous situation ( a man in love with his computer’s voice and mind) feel completely plausible.

HER explores love and heartbreak, loneliness, and the dangers of our technologically absorbed society. For discerning media-wise viewers, it’s an admittedly strange subject. There’s also lots of strong foul language and some strong sexual content, including a steamy scene between the male lead and a female human sex surrogate who offers to help the man and his computerized lover connect with physical intimacy. So, while HER has some insightful commentary about our tech-obsessed society and human relations, extreme caution is advised.

Of course, if you want to know the true meaning of love, the Bible has a lot to say about the subject. For example, Jesus says in Luke 10:27 that the two greatest commandments are to love God with all your heart, soul, strength, and mind and love your neighbors as you love yourself. He also says in John 15:13 that there’s no greater love than the sacrificial love when someone lays down their life for a friend. Finally, Jesus says in John 14:23, “Anyone who loves me will obey my teaching. My Father will love them, and we will come to them and make our home with them.” This is the Love Gospel of Jesus Christ, who’s not just our Lord and Savior, but Lord and Savior to all people everywhere.

Starring: Searching for the Meaning of Love