"Madness and Mayhem Triumph Over Morality" 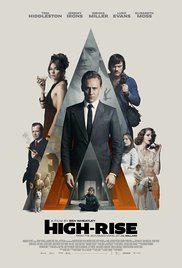 HIGH-RISE is set in an alternate version of 1970s London. Dr. Robert Laing moves into a new state-of-the-art apartment building, reaching 40 stories high. The building’s wealthy “Architect” designed it so that the lower classes live on the lower floors, the middle class in the middle, and the wealthiest residents on the top floors. Wild parties are offered every night on the various floors, with Laing attending those below and above him. Eventually, Laing finds himself caught in the middle as the social order breaks down.

Based on a novel by an acclaimed left-leaning science fiction writer, HIGH-RISE serves more as a hijacking by Director Ben Wheatley. His version has no real connection to London, and the class warfare within it festers in an artificial, self-contained society. The characters don’t adhere to any morals and don’t hesitate to engage in immoral behaviors. Killing others becomes an acceptable act, and sexual immorality is allowed without consequence. Consequently, most viewers will find it hard to relate to this movie. Ultimately, HIGH-RISE is an atheist, communist indictment of capitalism. HIGH-RISE is an abhorrent allegory.

(HHH, CoCoCo, AcapAcapAcap, RoRo, Ho, LL, VVV, SSS, NNN, AA, DD, MM) Very strong humanist, communist, anti-capitalist worldview, with some Romantic ideas about what corrupts humanity, which posits no God or supernatural world, man will devolve from civilized to primitive behavior if basic needs aren’t met, people in society resort to anarchy once the social order breaks down, the main goal of characters is to achieve material wealth or pursue physical pleasures above all moral or ethical considerations, the movie indicates capitalism has led to the corruption of man, plus it’s implied a minor character is homosexual; 19-21 obscenities and profanities, and a joke is made about defecation; very strong and strong violence includes dead people are shown lying everywhere in several scenes, blood stains and splatters are shown on clothing in many scenes, it’s implied a dog is killed and eaten with a dog leg roasting over a fire, a severed head is shown on a table and its skin is pulled back revealing what’s underneath, a man drowns a dog in a pool, several fist fights occur throughout various scenes, a man commits suicide by jumping from a balcony and landing head-first on a car below, a dog is heard being abused by a golf club, an abused dog is shown with blood and injuries all over, it’s implied a horse is killed and eaten, a man is shot and stabbed, and it’s implied that a woman is raped; very strong sexual content overall includes a few scenes depicting an orgy, a man tells a woman he wants to sleep with her, several unmarried couples fornicate, a woman commits adultery, a woman is molested, and it’s implied a minor character is homosexual; multiple scenes depict naked couples having sex where partial or full nudity is displayed, and a man is shown lying on his balcony naked with only a book to cover his private area; several party scenes show alcohol consumption or mild drunkenness; a party scene depicts the use of drugs; and, strong miscellaneous immorality such as characters don’t adhere to any morals and don’t hesitate to engage in immoral behaviors, killing others becomes an acceptable act, and the police don’t intervene in any of the criminal activity.

HIGH-RISE is set in an alternate version of 1970s London, where a doctor moves into a new modern high-rise only to see the residents of the building descend into anarchy when the poor people on the lower floors realize the rich people on the upper floors are selfishly using all the building’s resources, leaving them with very little. HIGH-RISE gets confusing and off-putting and has a humanist, communist, anti-capitalist worldview, while showing the most abhorrent and perverse desires of humanity.

London doctor, Robert Laing, moves into a state-of-the-art apartment complex designed by the “Architect,” Anthony Royal, whose grand vision is to sell his utopian masterpiece as the ultimate in living. Rising forty floors into the air, the high rise divides its residents into income groups, with the lowest earners relegated to the bottom floors while the wealthiest enjoy the lavishness of the top floors. Laing lands in the middle on the 25th floor as a staunch middle class representative. Although the outside of the building looks fairly uniform and utilitarian, the interior suggests otherwise. The bottom floors are decidedly more crowded and cluttered, offering wild parties, sometimes infused by residents of the middle floors and gaggles of children wild. Up top, the parties are more subdued, dabbling in champagne, elitist conversation and ridiculous costumes.

Laing finds himself going back and forth between the two worlds, making acquaintances with the likes of documentary filmmaker, Richard Wilder, who can barely scrape together enough money to support his family, and the Architect himself, Royal. Able to blend in with the wealthy residents at first, Laing is invited by Royal to the penthouse and is trusted enough to be given a behind-the-scenes look at Royal’s other high-rise projects.

This creates tension among those who surround Royal, because they see Laing as an intruder among their ilk. Before long, Laing is banished from attending their parties. So, he starts spending more time with the people on the lower floors. Befriending a young boy named Toby, the son of a woman with whom he begins an affair, Laing finds himself more at home. He even ignores the people who live alongside him in the middle of the building.

It’s a little unclear in the movie just how things begin to fall apart, but there is the occasional random complaint of power outages on the bottom floors and a battle over the swimming pool between the elites who take it over for a cocktail party while at the same time the children want to use it for a birthday party. A chaotic montage shows the gradual destruction of the social order within the building. Laing is shown as a bystander, and a bridge of sorts between the lower and upper classes. He fits in with neither and largely keeps to himself, protecting what he owns while anarchy surrounds him.

Before long, piles of trash and dead bodies litter every floor of the building, even the outside parking lot. A curious police officer wanders onto the property and inquires if everything is all right. Royal insists everything is under control. This oddly placates the officer, and he is sent on his merry way. The chaos and destruction are so rampant that barely anything remains. What becomes of the high-rise seems to be in Laing’s hands, the only apparently sane person.

Based on the 1975 science fiction novel by acclaimed, left-leaning writer J.G. Ballard, HIGH RISE serves more as a hijacking by director Ben Wheatley, who places priority on his artistic vision of it rather than staying true to the book’s exposition or Ballard’s underlying philosophy. In Wheatley’s version, the high-rise has no real connection to London, and the class warfare within it festers in a sort of artificial, self-contained society, an alternate reality. The repeating question throughout the movie is if things are so bad (i.e., food is scarce and people are being murdered by the dozens), why don’t they just leave? However, that doesn’t seem to enter anyone’s mind, and it’s as if they are willingly trapped there. Although the movie’s aesthetics and music are curiously intriguing with a retro-modern tone, the story structure quickly breaks down into what can only be described as a chaotic mess, leaving only confusion behind. Consequently, most viewers will find it hard to relate to this story or its characters.

Ballard and Wheatley’s philosophy is extremely dark and violent. Although the movie’s high-rise project resembles a communist approach to living, with its utilitarian environment everyone must share, HIGH-RISE puts on display the most corrupt desires of humanity while excusing violence and mayhem as natural side-effects of a capitalist society gone mad. Allegorical almost to a fault, the movie’s anti-capitalist message is that capitalism only benefits the small portion of elites at the top of society, while everyone else must suffer the repercussions of their selfishness. The characters don’t adhere to any morals and don’t hesitate to engage in immoral behaviors. Killing others becomes an acceptable act, and sexual immorality is allowed without consequence.

Ultimately, HIGH-RISE is an atheist, communist indictment of capitalism. The income inequality it portrays doesn’t match the reality of a truly capitalist society. In reality, free market capitalism is the only system that allows people to climb the social ladder. It’s also the only system that promotes real creativity and allows a person to fall when he fails. Of course, when government becomes too big, it begins to corrupt not only rich people and big business, it also corrupts the average citizen, including the poor and needy.