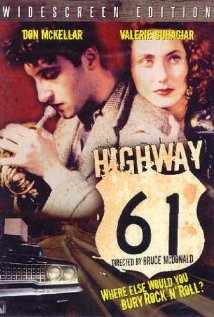 HIGHWAY 61 is a road movie geared for the midnight "alternative cinema" crowd, full of bizarre adventures, caricatures rather than characters, and fleeting views of the scenic armpits of America. Marginal skill (and a skewed vision) on the part of writer and director result in a freak-show atmosphere which is neither funny nor engaging. Kinky sex and some off-handed comedy about selling one's soul to someone who may or may not be Satan add to a losing combination.

In a Canadian village, Pokey Jones discovers a corpse, and attracts the shiftless Jackie Bangs, who needs a place to hide illegal drugs and the body, whom she says was her brother, serves the purpose. She convinces Pokey to transport her and the deceased to New Orleans for “burial” (aka a drug deal). Thus begins HIGHWAY 61, a road movie full of bizarre adventures, caricatures rather than characters and fleeting views of the scenic armpits of America. Pokey and Jackie meet a deranged father with “Star Search” dreams for his three daughters. They have sex in a cemetary, after Jackie forces the issue at gunpoint. All the while, “Mr. Skin” pursues the duo, making Faustian deals along the way. We never are sure whether he is Satan, or a deranged eccentric. Thus, as far as the film is concerned, selling your soul is nothing to be concerned about. Instead, it’s a joke.

Films like this thrive on ambiguity and obtuse symbolism in lieu of well-drawn characters, meaningful story lines, or valid insights. No doubt, HIGHWAY 61 will meander around the country, playing for a few nights at “alternative” cinemas, or on college campuses, before landing on the back shelf of your local videostore.