"Your Family Is Your Home" 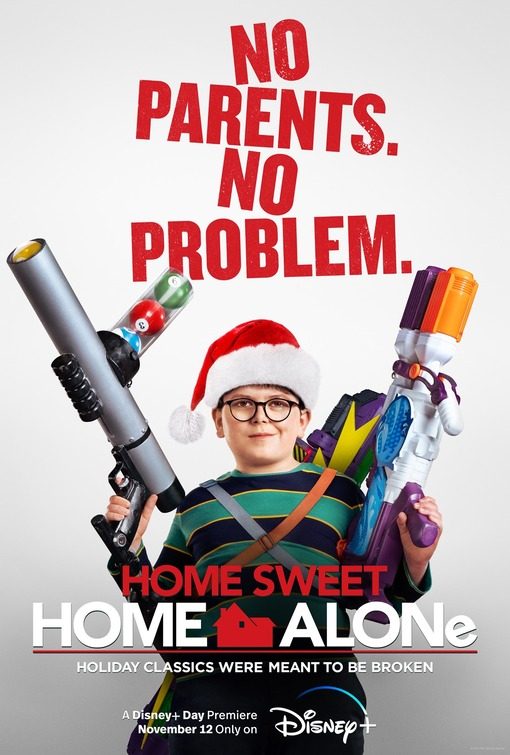 HOME SWEET HOME ALONE is an unofficial sequel to HOME ALONE, the 1990 movie that’s the biggest earning comedy of all time. This time, a 10-year-old boy with an English accent, Max, defends his home against two American parents. They think Max has stolen an antique doll from them that’s worth more than two hundred thousand dollars. Max’s family has gone to Tokyo for Christmas, accidentally leaving him behind. Max mistakenly thinks the two Americans, Pam and Jeff, are trying to kidnap him.

HOME SWEET HOME ALONE is a TV movie, so it doesn’t match the high level of the original movie. However, it has its share of laughs and warmth. For example, it has a strong moral, pro-family worldview. In one scene, Max stares at a Nativity scene featuring the Baby Jesus and his human parents. In another, longer scene, a church choir sings “Oh, Holy Night.” MOVIEGUIDE® advises caution for older children, however, because of the amount of slapstick violence in HOME SWEET HOME ALONE. Also, there’s a Non-Christian comment about the universe being mad at a struggling family.

(BB, CC, FR, VV, M):
Dominant Worldview and Other Worldview Content/Elements:
Strong moral, pro-family worldview where two large misunderstandings leading to physical conflict are eventually revealed, and this leads to reconciliation and friendship, family is strongly identified with home and thus valued, plus a choir sings “Oh, Holy Night” at church on Christmas Eve, a Nativity scene is shown of Jesus and His human family, and people says “Merry Christmas” often, but two people suffering economic setbacks wonder if “the universe” has something against them
Foul Language:
No foul language, but boy and his mother stop at an open house so boy can relieve himself (boy had too much soda) and boy tries to search the words “booby trap” on the Internet, but the parental controls won’t let him because of the word “booby”
Violence:
Strong and light slapstick violence such as many hard pratfalls, boy hits man’s forehead with a billiard ball and causes a large knot, large bag of sugar hits man in the groin, man and woman slide down stairs, man and woman slip on icy driveway that’s been sprayed with water earlier, booby trap sets woman’s feet on fire outside, and outside faucet has been rigged to spray her in the face, car hits lamppost after road has been sprayed with water earlier, woman with injured feet is led to room where a bunch of LEGO blocks have been paced on the floor, woman steps on another woman’s face as she tries to catch a fragile flying doll that’s worth a lot of money, chandelier comes crashing down, etc.
Sex:
No sex
Nudity:
No nudity
Alcohol Use:
No alcohol use
Smoking and/or Drug Use and Abuse:
No smoking or drugs; and,
Miscellaneous Immorality:
Breaking and entering, and a few mentions of Santa Claus.

The 1990 movie HOME ALONE is the biggest earning live action comedy of all time in the United States and overseas. HOME SWEET HOME ALONE is an unofficial sequel to HOME ALONE, but it updates the story by having a boy with an English accent defending his home from a married American couple who think the boy stole a valuable antique doll that could get their family out of debt. HOME SWEET HOME ALONE has its share of laughs and warmth and extols family, Christmas, Jesus, and overcoming conflict, but there’s a lot of slapstick violence and three or four problematic lines of dialogue.

To start things off, a 10-year-old boy and his mother, Max and Carol, make a pitstop at an open house because Max has an urgent need to relieve himself after drinking too much soda. The owners selling the house, Pam and Jeff, are having to sell their home because the Internet Cloud has out Jeff out of work. There’s no longer a need for Jeff’s job of onsite data management. Pam and Jeff haven’t told their children about the attempted sale and the open house.

While at the open house, Max annoys Jeff while Jeff is cleaning a closet where he’s stored his mother’s collection of antique dolls. Max’s mother sees the dolls and tells Jeff one of the dolls could be worth $5000. Before Max and Carol leave, Max and Jeff exchange some humorous banter at each other’s expense. Max also gets into an argument with Carol about having to share a bathroom with his nine cousins, who are visiting his family just before they all take a flight to Tokyo for a special Christmas vacation.

Back at his own house, Max is annoyed with all the raucous noise coming from his cousins. He decides to go into the garage and sit in the family car, where he falls asleep.

That night, Jeff researches his mother’s dolls on the Internet. He finds out one of the dolls is worth more than $200,000. Selling that doll could solve his family’s financial woes. However, when he goes looking for the doll, he finds it’s gone. He thinks Max stole the doll out of spite. So, the next morning, he looks up Max’s last name, which he recalls form the day before, and goes to Max’s house to get the doll.

However, when he shows up, Max’s family and relatives are all in a tizzy trying to leave for the airport. Jeff sees Max’s father hide the front door key under a decorative plant on the porch. He also hears the code for the alarm, and thinks he sees the doll inside the jacket Max was wearing yesterday. So, he decides to come back later and break into the house to get the doll.

Jeff leaves to go home. Everybody leaves for the airport. Back in the garage, however, Max wakes up, only to find everyone gone.

At first, Max is overjoyed he has the house to himself. It soon gets old, however, and Max starts to miss his family.

Meanwhile, Jeff tells his wife, Pam, about the doll. They decide to break into the house together, but it doesn’t go well. They actually break into the next-door neighbor’s back yard. They manage to get away, but Max overhears them talking about the doll. He thinks they’re planning to kidnap him and sell him to some old rich ladies. He also hears them planning to return at midnight that evening, on Christmas Eve, with Jeff pretending to be Santa Clause.

So, Max prepares a series of elaborate booby traps for Pam and Jeff. He sprays the house, the driveway and the road with water. Inside the house, he lays some more traps for them, including a tennis ball throwing machine filled with billiard balls and a massive amount of LEGO blocks on the floor of the den.

The stage is set for a battle royale.

There’s no way that HOME SWEET HOME ALONE could capture the raucous comedy and heartwarming qualities of the original HOME ALONE. That said, it has its share of laughs and warmth. Fans of the original movie will enjoy the twists and similarities. The biggest difference in the two movies is that, in the new one, the little boy is not going up against a pair of bumbling thieves. He’s going up against two misguided parents who get carried away. So, eventually, Max, Jeff and Pam realize that they’re all the victims of two unfortunate misunderstandings. They think Max stole their doll, and Max thinks they’re trying to kidnap him.

Ultimately, the movie extols family and overcoming conflict. People say Merry Christmas a lot. Also, Max stares at a Nativity scene featuring the Baby Jesus and his human parents, Mary and Joseph. In another scene, a church choir sings “Oh, Holy Night.” However, MOVIEGUIDE® advises caution for older children because of the amount of slapstick violence in HOME SWEET HOME ALONE and for a Non-Christian comment about the universe being mad at a struggling family.

As noted above, HOME SWEET HOME ALONE is an unofficial sequel to the original 1990 movie. A bumbling cop in the new story is actually the original boy, Kevin’s, obnoxious brother, Buzz.