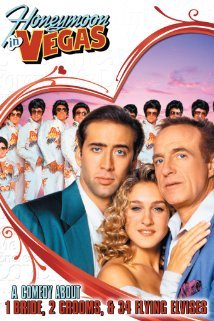 In HONEYMOON IN VEGAS, Jack Singer and Betsy travel to Vegas for a quick wedding, but millionaire card-shark Tommy Corman tries to steal Betsy. HONEYMOON IN VEGAS has a predictable happy ending, but ridicules marriage and presents Jack and Betsy's premarital sexual relationship as unsatisfying but normal and acceptable.

In HONEYMOON IN VEGAS, Jack Singer (Nicholas Cage) has a problem: his fiancee Betsy wants to get married, but Jack’s deathbed promise to his mother (to avoid marriage) and his chosen line of work (as a private eye who trails spouses) have paralyzed him. Realizing he is losing Betsy, Jack spirits her away to Las Vegas for a painless wedding. Unfortunately, their plans are complicated by millionaire Tommy Corman, who is transfixed by Betsy’s resemblance to his late wife. He invites Jack to a poker game and takes him for $64,000. Then, he offers Jack the option that he could be let off the hook if he let Corman have Betsy for the weekend–just for companionship. Corman then takes his plan to another level by taking Betsy to Hawaii. This drives Jack nuts and leads to a comical cross-country pursuit.