ICE AGE: DAWN OF THE DINOSAURS 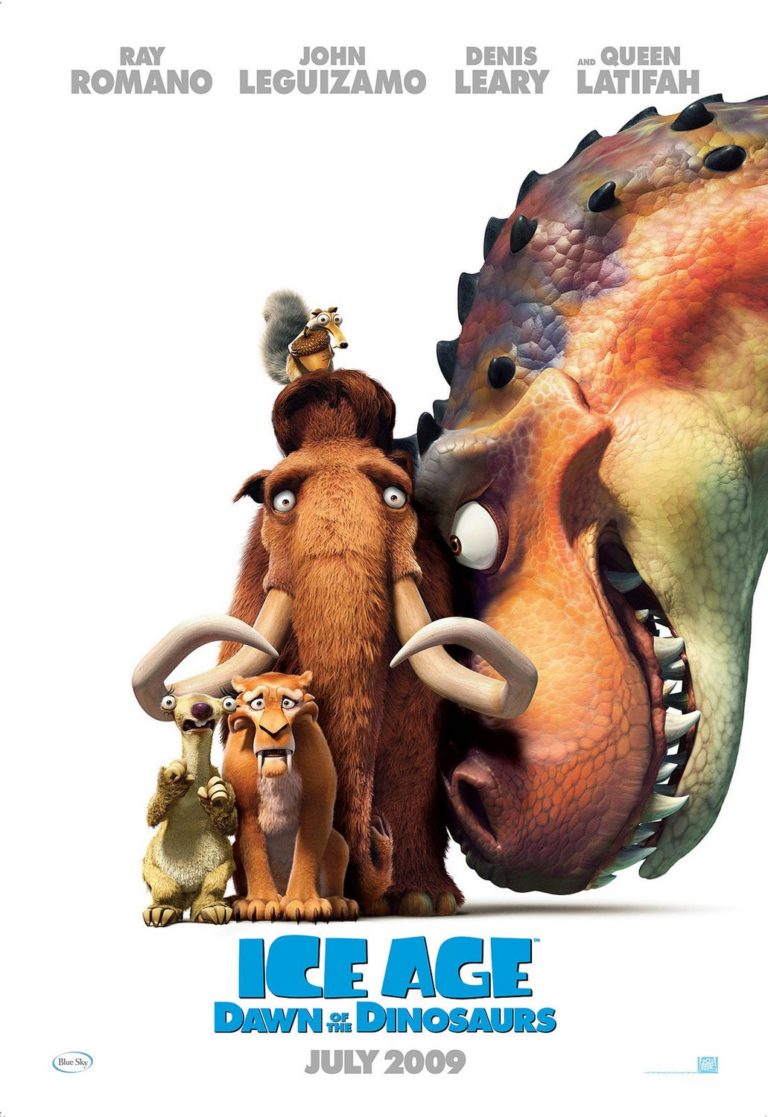 ICE AGE: DAWN OF THE DINOSAURS opens with the nutty squirrel Scrat falling through the ice and exposing an unknown dinosaur world below the icy world where Manny the mammoth and his friends now live. Sid the silly sloth finds three T-Rex dinosaur eggs. They hatch, but the mommy dinosaur comes back for them and grabs Sid. Manny and his pregnant wife, Ellie, go to save Sid, followed by Diego, the saber-tooth tiger, and the two possums, Crash and Eddie. They find that the dinosaur world is full of dangers. Coming to the rescue is Buck, a wacky weasel who has been trapped in the dinosaur world for years.

ICE AGE: DAWN OF THE DINOSAURS has a driving plotline and two major new characters that prevent it from becoming stale. The jeopardy hardly lets up, and the movie is filled with funny jokes. The heroes risk their lives to save others. There are also a couple biblical references. These moral, redemptive elements are mitigated, however, by some intense, scary cartoon violence and political correctness, including a couple gender-bending references. MOVIEGUIDE® advises caution for younger children. Go to movieguide.org for the details.

(BB, C, PC, Ho, P, Ev, L, VV, N) Strong moral worldview with some redemptive elements of sacrifice, including a couple of biblical allusions, marred by some light political correctness of multicultural tolerance and a few gender bending/homosexual jokes such as male sloth pretends to be the mommy of three baby dinosaurs and character says he was there when some giant prehistoric butterflies “came out,” plus a pro-American allusion of forming one “herd” out of many different animals (E Pluribus Unum) and an evolutionary reference to dinosaur extinction; one light obscenity and three butt’s and a couple dangs; sometimes scary cartoon action violence involving carnivorous plants and scary dinosaurs is too strong for younger children and includes creatures falling, baby dinosaurs wreak havoc chasing and trying to bite other young creatures, scary dinosaur skeleton, giant carnivorous plant tries to eat heroes, dinosaurs grab creatures, large dinosaur chases creatures, pack of small meat-eating dinosaurs try to eat other creatures, heroes fight menacing dinosaurs, etc.; no sex, but references to having babies; fur on male squirrel gets torn off, revealing two nipples; no alcohol; no smoking or drugs; and, nothing else objectionable.

ICE AGE: DAWN OF THE DINOSAURS has a driving plotline and two major new characters that prevent it from becoming stale or old hat.

The movie opens with the nutty squirrel Scrat falling through the ice and exposing an unknown dinosaur world below the place where Manny and his friends live. Manny the Mammoth and his mate, Ellie, are going to have a baby, and Manny has built a special playground for the expected arrival.

Meanwhile, Manny’s friend Sid the sloth finds the hole in the ice and discovers three large T-Rex dinosaur eggs in the cave below. Against Manny’s advice, Sid decides to care for them as if he’s their mommy. Sid is upset that Manny doesn’t seem to want him be a part of Manny and Ellie’s burgeoning family. The eggs hatch, but the baby dinosaurs wreck Manny’s playground. This causes further tension between Manny and Sid.

The real mommy dinosaur comes to get her babies. She grabs Sid at the same time and runs back into the dinosaur world below. Manny is reluctant to follow the dinosaur and save Sid. He figures Sid is already dead meat.

Ellie, however, convinces Manny and Diego the saber-toothed tiger to help her retrieve Sid. Her two possum companions, Crash and Eddie, go along for the ride. They find that the dinosaur world below has unique dangers that could kill them. Coming to the rescue is Buck, an Aussie-tongued, wacky weasel who has been trapped in the dinosaur world for years.

Buck informs the gang there’s a male T-Rex on the loose, a monster who’s been Buck’s arch-nemesis ever since Buck lost an eye trying to escape from the beast. Suddenly, Manny is no longer king of the jungle. He has to rely on Buck and his friends to protect Ellie and save Sid.

The script to DAWN OF THE DINOSAURS keeps things moving along. The characters face constant jeopardy, both emotional and physical. And, the themes of family and parenthood are carried through to the end. Spicing things up is plenty of goofy, funny humor that will delight most viewers.

The heroes in ICE AGE 3 risk their lives to save their friend Sid. They also risk their lives to protect the pregnant mammoth. Also, the movie itself extols family. There are even a couple of biblical allusions. These positive moral, redemptive themes are mitigated, however, by a light politically correct multicultural tone with a couple gender-bending, homosexual allusions. For example, the movie says that, in Manny and Ellie’s herd, everyone is accepted no matter who they are. Also, Sid thinks of himself as the mommy of the baby dinosaurs. Furthermore, at one point, Buck says that, when the gang encounters some giant prehistoric butterflies, he was there when they “came out.”

This political correctness may affect older children more than younger ones. The movie’s sometimes intense, scary cartoon violence and dinosaurs is a little too much for younger children, however.

Rent or Buy ICE AGE: DAWN OF THE DINOSAURS: