"Prayer, Heroism, Duty, and Sacrifice Save the Day" 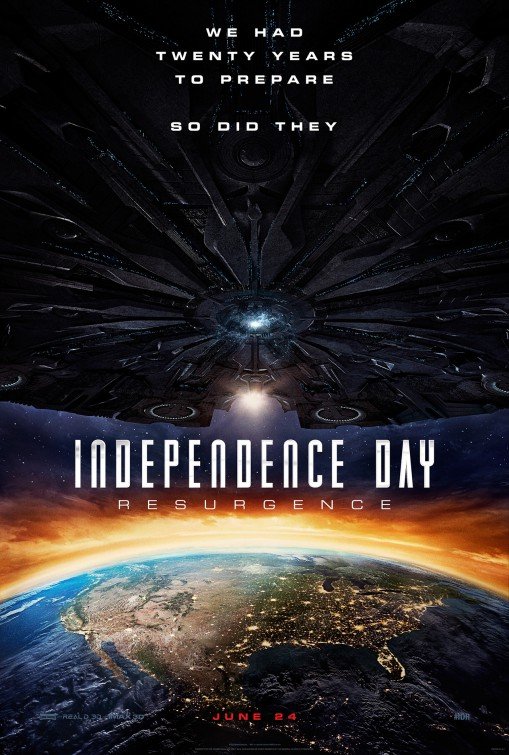 INDEPENDENCE DAY: RESURGENCE picks up 20 years after the original. For two decades, the humans taken the alien technology left by the invaders to rebuild Earth’s cities. They have even built a base on the moon that also serves an early warning system should the invaders return. Predictably, the aliens return, with an even bigger mother ship. They start drilling to the Earth’s core, to take the energy and destroy the planet. The good guys have only a few hours to destroy the alien invaders and kill their giant queen.

The script for RESURGENCE is somewhat less cohesive this time around. Still, watching the characters from the first movie in action again is fun, especially Brent Spiner’s quirky scientist. The bloom may be off the rose a little, but the filmmakers still deliver the thrills, spectacle and comic relief viewers should expect. INDEPENDENCE DAY: RESURGENCE has a strong moral, redemptive worldview stressing good against evil, heroism, duty, family, faith, and even prayer. However, these positive elements are marred by gratuitous foul language and a couple politically correct moments promoting liberal multiculturalism.

(BBB, ACAC, PP, C, H, Ro, PC, Ho, LLL, VV, S, N, A, D, M) Very strong moral, anti-communist worldview with strong American values stressing coming together and putting aside differences to fight a ravaging enemy that has a “hive mind” like something out of a 1950’s anti-communist science fiction movie, taking care of others, heroism, duty, family, camaraderie, a positive reference to the Fourth of July, and the American military and democratic government are seen in a positive light though they’re working internationally against the aliens from outer space, plus some light redemptive elements and references including mentions of having faith (but the faith references aren’t overtly attached to Jesus or even God though a Jewish rabbi makes them), forgiveness, sacrifice and American leader asks the world to pray for them as they approach the final battle with the evil alien villains, diminished slightly by a light humanist declaration of a godless human resolve being the thing that’s led to success, a couple Romantic, liberal and politically correct multicultural references to coming together and praying together whatever your “creed, race or national origin,” so a couple times the movie stresses a Romantic, liberal utopian fantasy, plus light/brief implication two side characters may be in a homosexual relationship; 24 obscenities, five or six strong profanities and three light profanities, plus man gives aliens the finger because they killed his parents; strong, sometimes intense action violence includes gun battles between aliens and humans, fighter spaceships battle one another, explosions, man stabs alien in back with machete, bus windshield wipers wipe away green alien slime after one big alien has been killed, man gets carried away shooting into alien soldiers after they killed his friend, super-large spaceship destroys London and part of it crashes into New York City and Washington. D.C., fight spaceships battle giant alien queen who has am energy shield; no sex scenes, but a couple light innuendoes about sex such as general hints he and his wife were having a “very good morning” at an expensive bed and breakfast when he was called into work for an emergency, and some youth in Vegas say their bus driver left them stranded to run to his girlfriend up north because the end of the world seems fast approaching, plus there are a couple kisses (one pilot is engaged to the former president’s daughter); rear male nudity in one scene where a major character walks around wearing a hospital gown; some men on a boat are drinking to raucously celebrate but are interrupted with an important job to do; smoking in the background of a couple scenes set in Africa; and, there are bad feelings between two pilots because one pilot almost got the other killed during training.

INDEPENDENCE DAY: RESURGENCE picks up 20 years after the original, with a united Earth facing another invasion from the evil alien monsters who were defeated in the first movie. Not quite as put together or exciting as the original, INDEPENDENCE DAY: RESURGENCE nevertheless manages to stir up plenty of thrills, excitement and laughs to deliver the goods, but the movie’s positive, morally uplifting, redemptive worldview is mitigated by a couple politically correct multicultural moments and too much foul language, including several gratuitous strong profanities that should have been left on the cutting room floor.

As noted above, the movie opens 20 years after humans, led by the President of the United States and what was left of the American military, defeated a race of alien invaders. The humans have had 20 years to take the alien technology left by the invaders to rebuild Earth’s major cities. Humans have even built a base on the moon and an outpost near Saturn as sort of an early warning system should any other alien invaders decide they want to attack Earth. According to the new female president, the nations of the Earth have set aside their differences to work together.

However, the former president, Whitmore, is having nightmares about a new alien invasion. He and others who personally encountered the aliens are having visions of a large alien globe with a slit in it.

Sure enough an alien spaceship carrying such a globe shows up at the moon base. Whitmore tells the new president to wait and see what the aliens driving the ship want, but she decides to fire at the ship anyway, and it crashes. Jeff Goldblum’s character from the first movie, Dr. David Levinson, goes to investigate the alien ship in an Earth spaceship piloted by Jake, who happens to be the fiancé of Whitmore’s daughter. They retrieve a smaller globe from the apparently uninhabited spaceship and bring it to Area 51 to study.

Meanwhile, a 3,000-mile wide alien spaceship also shows up and parks itself over the Atlantic Ocean, Britain and the American East Coast, taking out London and almost completely destroying New York City again. The spaceship releases another ship, which starts drilling to the Earth’s core to take the core’s energy. This would, of course, destroy the planet and everyone on it. The humans only have a few hours to devise a plan to destroy the alien invaders and kill their giant queen.

RESURGENCE has several subplots to go along with this main story.

David’s rabbi father, Julius, ends up stranded on his boat in New York. He’s picked up by a family of teenagers and children driving their car inland, away from the destruction. Julius takes over and has them drive him toward Area 51 to be with his son.

Jake takes part in an attack on the alien mothership that doesn’t go so well. He and the surviving pilots, including his rival, the son of Will Smith’s character from the first movie, must work together to get back to Area 51.

Finally, the quirky Area 51 scientist from the first movie, Dr. Okun, played wonderfully once again by Brent Spiner, wakes up from a 20-year coma. He’s tasked with studying the alien globe, which may hold the key to defeating the alien queen and her minions.

Director Roland Emmerich, who co-wrote the screenplay, manages to keep most of these balls floating smoothly in the air, but the script is a little more diffuse and less cohesive compared to the first movie. The new characters don’t register quite as well as the old ones that show up in this sequel. Brent Spiner almost steals the show this time around with his fun, quirky performance as the newly awakened Area 51 scientist. This is good, but it sort of leaves Jeff Goldblum and Judd Hirsch’s immensely likeable father-son team by the wayside. They’re still fun to watch, as is Bill Bullman’s presidential character, who gave the first movie such patriotic gravitas.

Despite its limitations, including some corny moments, INDEPENDENCE DAY: RESURGENCE delivers the thrills, excitement, spectacle, and comic relief viewers should expect from a blockbuster sequel. The bloom may be off the rose a little bit, but this sequel still gives viewers their money’s worth.

RESURGENCE has a strong moral worldview stressing heroism, duty, family, sacrifice, camaraderie, helping others, and coming together and putting aside differences to fight a ravaging, predatory enemy. Also, the American military and government are still seen in a positive light, though they’re working internationally against the aliens from outer space. In fact, the Americans discover the evil aliens have a “hive mind.” This is reminiscent of the 1950s anti-communist science fiction movies of the past. Finally, the movie also contains some positive, though vague, redemptive references to prayer and faith.

Sadly, these positive elements are diminished by too much gratuitous foul language, including several strong profanities misusing the Lord’s name in vain. Also, one scene contains a humanist comment that human resolve, not God, is the reason the humans were able to defeat the aliens in the first movie. There are also a couple scenes that reflect a Romantic, liberal, politically correct attitude celebrating multiculturalism. For example, in one scene, the American leader, broadcasting to the world, asks for prayers from all humans, no matter their creed, race or nationality. Thus, the sequel’s revelation that Earth has become a peaceful place where humans have been able to totally set aside their differences strikes MOVIEGUIDE® as a Romantic, liberal, multicultural fantasy. People are really only one in Christ, according to the New Testament documents (see Romans 12:5 and Galatians 3:28). And, even that has proven difficult at times.

Ultimately, however, it’s the foul language in INDEPENDENCE DAY: RESURGENCE, especially the gratuitous profanities, that warrants the biggest caution from MOVIEGUIDE®. MOVIEGUIDE(r) reports; you decide.