"Tiny Lights of Decency in a Dark World" 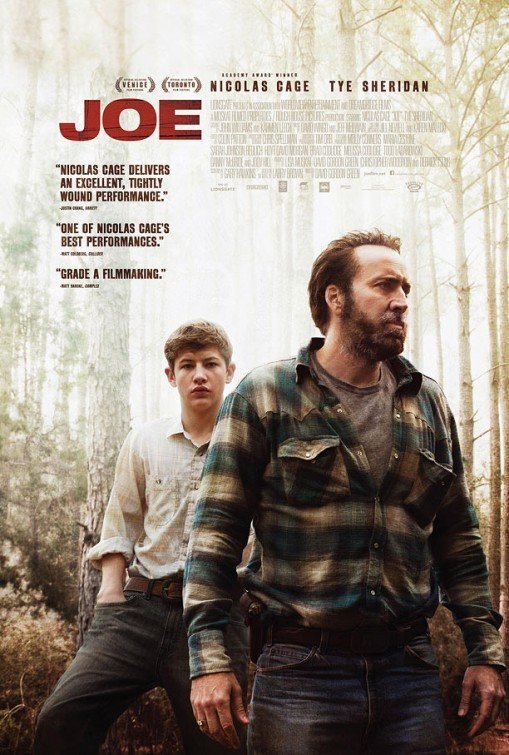 JOE stars Nicolas Cage, playing a Texas man who heads up a crew that clears backwoods areas of dead trees. He treats his men with respect and fair pay. One day, he meets a teenage loner named Gary, who asks for a job on Joe’s crew. Joe learns that Gary is horribly impoverished and abused by his abusive alcoholic father. Joe teaches Gary lessons in self-esteem, self-respect and the value of hard work. He defends Gary against his father. However, Joe is hot-tempered and has other enemies. More problems ensue when one enemy teams up with Gary’s father.

JOE marks a huge comeback for Nicolas Cage. He turns in a nice performance of a man with both good and bad qualities. Young Tye Sheridan as Gary builds on his impressive debut in MUD. He offers a beautiful portrait of a teenager trying to do the right thing. The story ultimately is rewarding, with strong moral elements, but JOE contains abundant foul language, some harsh violence, strong lewd moments, and brief nudity. So, the worldview is mixed, and extreme caution is advised.

(PaPa, BB, C, CapCap, LLL, VVV, SS, NN, AA, DD, MMM) Mixed pagan worldview, with some strong moral, light redemptive elements, set in a dark world where flawed protagonist helps others in need, tries to do the right thing, shows kindness, and is self-sacrificing, plus protagonist is a positive business owner who shows teenage boy the value of hard work and fairly pays his workers and overtly extols those capitalist values; at least 130 obscenities and profanities; infrequent but fierce violence includes hopelessly alcoholic father punches teenage son hard enough to send him flying before kicking him on the ground on at least two occasions, a mostly implied scene where alcoholic father pointlessly bludgeons a black man to death with a metal pipe to his head for no apparent reason but sheer hatred, character shot in torso, fighting, bully beaten up, some hitting; strong sexual content includes briefly depicted fornication in house of ill repute as people walk by, protagonist hires the head madam for sex but is distracted by her dog, two prostitutes come to man’s house to entice him, but he stops them, implied past incest, implied oral sex, and protagonist lies in bed with girlfriend who cohabits with him, rear male nudity during sex; alcohol use, drunkenness, and teenage son and girl have abusive alcoholic father; smoking and marijuana use in one scene; and, gambling, dysfunctional father, alcoholic father steals teenage son’s wages, people keep vicious dogs, racism.

JOE is a powerfully acted, emotionally wrenching ironic story of an average man who tries to help people any way he can yet keeps getting dragged into one hard-luck situation after another, including the effect his friendship has on an troubled teenage boy with an alcoholic abusive father. JOE has a mixed worldview with strong pagan and moral content, marred by an abundance of foul language, some fierce violence, and strong lewd content.

JOE stars Nicolas Cage in the title role, playing a man who heads up a crew that clears backwoods areas of dead trees. He treats his men, who are all blacks in a backwoods area still caught up in de facto segregation, with respect and fair pay. One day, he meets a teenage loner named Gary (Tye Sheridan), who asks for a job on Joe’s tree crew and gets it.

Joe comes to learn that Gary is horribly impoverished and abused by his worthless alcoholic father. Joe begins teaching Gary lessons in self-esteem, self-respect and the value of hard work. He also defends Gary against his father and helps the boy move in with him to be in a safer environment.

However, Joe has enemies from elsewhere in town and his past, and constantly has to control a temper that once got him thrown in prison for 29 months for assaulting a policeman. As Joe faces pressures from saving the boy as well as his own economic strains and the danger of others seeking to hurt him, he gets caught between trying to be a truly good man and the sometimes inevitable fact that good guys sometimes have bad things happen no matter how hard they try.

JOE marks a huge comeback for its star Nicolas Cage, who has been making some questionable action movies for the last 10 years. Young Tye Sheridan builds on his impressive debut in MUD and offers a beautiful portrait of a kid trying to do the right thing when everyone around him does wrong to him.

Director David Gordon Green brings JOE to life in a sad and dusty world of poverty and broken dreams, but keeps his real focus on the decent hearts of Joe and Gary. Though the story ultimately is rewarding, with strong moral elements, the foul language is extreme. The violence is infrequent but harsh. JOE also contains some strong lewd moments and brief nudity. So, the worldview is mixed, and extreme caution is advised.