"Every Planet Needs a Savior" 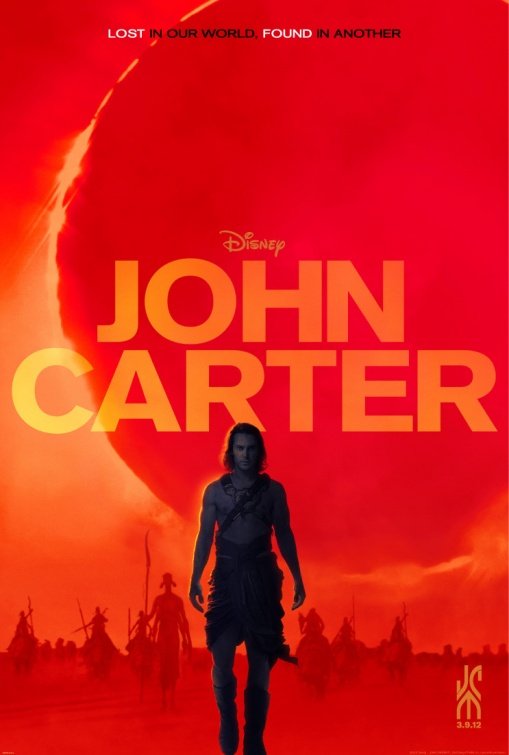 JOHN CARTER is a rousing AVATAR-like 3D spectacle with some characters reminiscent of STAR WARS, epic battles, and a damsel in distress. If all that sounds a bit much, it sometimes is. John Carter is a fearless but disillusioned Confederate Captain who finds himself mysteriously transported to Mars. Carter discovers he can jump to amazing heights because of the weak Martian gravity. John’s remarkable ability to fight attracts the attention of those in search of a savior for the planet. Among them is the beautiful Princess Dejah Thoris of Helium. Dejah belongs to a red-skinned race of humans. Dejah’s kingdom is being attacked by the ruthless Sab Than. Sab Than is secretly in cahoots with a powerful race of white-skinned humans having mysterious powers.

At 132 minutes, JOHN CARTER makes sure moviegoers get their money’s worth of spectacle. The hero is handsome, the princess gorgeous, the bad guys nasty, and the faithful dog-like creature is fun. The hero goes from being selfish and apathetic to being unselfish and heroic. However, JOHN CARTER contains lots of action violence, brief foul language, some mixed pagan messages, and creatures that could scare young children.

(BBB, C, PaPa, FR, E, PP, LL, VV, N, A, M) Very strong moral worldview with some redemptive elements (including an apparent Christian funeral for two loved ones), where good overcomes evil and main character goes from self-centered man seeking gold to unselfish sacrifice for others who are oppressed, marred by references to a goddess, including the beginning of the climactic battle where the changed hero rallies non-human troops in her name, but in the second book by the original author, the goddess is shown to be a phony villain, plus a light environmentalist attitude and some patriotic, chivalrous fervor of fighting for a benevolent kingdom and for good causes, including protecting women; eight mostly light obscenities (“h” words and a couple “d” words), one GD, and one or two light exclamatory profanities; huge amounts of action violence with major battles, lots of sword fighting and explosions, some scenes, reminiscent of the Roman Coliseum, feature combat between small characters and very large scary ones, with a large audience cheering, one scene includes images of creature’s blue blood as man with large sword pops out of its back after it falls, man loses an arm, and alien is beheaded; no sexual activity beyond a kiss; upper male nudity, light female cleavage, and some female midriffs shown; brief alcohol use; no smoking or drugs; and, some major evil characters transform into whatever appearance they consider convenient, there is deceit and dishonesty involved in the war on Mars, and man rebukes brutality against friendly animal and against other people.

Based on A PRINCESS OF MARS by Edgar Rice Burroughs, JOHN CARTER is an AVATAR-like 3D spectacle with MATRIX effects, epic battles, some characters reminiscent of STAR WARS and GLADIATOR, and a damsel in distress. If that sounds a bit much, it sometimes is.

The basic story opens revealing John Carter (played by Taylor Kitsch) to be a fearless but disillusioned post Civil War Confederate Captain from Virginia. An army colonel is trying to forcibly recruit Carter to fight Indians in Arizona. He refuses, escapes and continues his relentless search for a “spider cave” filled with gold. Upon finding the cave, he’s attacked by a man with a mysterious medallion. As the man dies, Carter is mysteriously transported to Mars.

Not knowing where he is, Carter wakens to discover he’s in a strange environment with strange creatures. He also has the ability to jump to amazing heights because the gravity on Mars is not as strong as Earth’s gravity.

The creatures of the planet, which include four-armed aliens with tusks and red-skinned humans, soon witness Carter’s astounding ability to fight. Throughout the movie, his fighting ability attracts the attention of those in search of a savior for their planet, especially Princess Dejah Thoris of Helium (Lynn Collins). Dejah belongs to a red-skinned race of humans.

Helium is under attack by the Zodangans, led by Sab Than. Sab Than is secretly in cahoots with the Therns, a race of powerful white-skinned humans who say they serve the goddess Issus. They are the ones who control the power of the medallion that transported Carter to Mars. Sab Than is trying to force Dejah’s father into giving him Dejah’s hand in marriage, but Dejah runs away.

Carter is initially found and enslaved by the Tharks, a race of green-skinned warriors with four arms and two tusks. Like the army colonel on Earth, the Thark leader tries to get Carter to fight for them. Carter refuses, and a standoff occurs. During the standoff, they witness Zodangan airships chasing Dejah’s airship. Seeing that the woman is in danger, Carter’s chivalrous nature provokes him to save her life.

Doing that attracts the attention of Sab Than and the evil Thern leader controlling him, Mattai Shang. Shang is opposed to the idea of Mars having a savior. In fact, he and his men want to control the whole planet by oppressing all who oppose them and their surrogates, surrogates like Sab Than.

Eventually, Carter is forced to take a stand, but now, it’s based on his love for the princess from Mars and his compassion for others, not his selfish greed for gold.

JOHN CARTER is a rousing science fiction adventure, with all sorts of fabulous, thrilling daring do. The main impetus of the action is saving the damsel in distress.

One of the movie’s logos is simply JC with an “M” below it for Mars. The problem with the movie’s idea of a savior, however, is that Jesus Christ didn’t come as an ultimate fighter able to dispatch countless villains with fists and swords. Jesus claimed his war was not against flesh and blood but against spiritual forces. JOHN CARTER has spiritual forces, but they include references to a goddess names Issus, mysterious powers, and the nefarious white-skinned humans or Therns, who can change their appearance like a chameleon. There is even a bad guy who accepts the Thern leader’s demonic offer to be made ruler of the planet in exchange for absolute obedience.

At one point, the demonic Thern leader explains to John Carter that planets tend to gradually become more advanced while using their ever improving technology to engage in war – to the neglect of their planet. This is a bit of an environmentalist lecture, but the character adds that he and his pals exist to encourage and manage the warfare behind the scenes. This is similar to Satan’s role on Earth. He is the father of lies out to create and manage human suffering.

John Carter is transformed in the course of the movie from being a selfish, greedy person to unselfish savior.

Of course, the only true savior in the universe is Jesus Christ, who already defeated Satan by paying the price for the sin of mankind on the Cross. The real power of Satan is in encouraging sin, causing a sense of guilt, and proclaiming condemnation. God’s plan of salvation forgives, cleanses, and frees those whom Satan wishes to condemn.

That’s not to say there isn’t a place for physical combat and heroes like John Carter. Satan may have led Hitler to do what he did, but many brave heroes were needed to combat Hitler’s forces. Many great movies feature heroes who risk their lives combating evil forces. That’s exactly what John Carter does. What’s missing, however, is a clear reliance on God. King David slew Goliath, but the Bible makes very clear his reliance on God in doing that.

Although the Martians are the only ones to mention the goddess Issus at first, John Carter rallies the Tharks by getting them to fight in her name as well as for Mars. In the second book by Edgar Rice Burroughs, THE GODS OF MARS, Carter apparently discovers that the goddess Issus is a fake. In fact, the evil Therns who serve Issus aren’t even mentioned in his first book. Hopefully, if Disney makes a sequel to JOHN CARTER, it will bring out these important points and insert some references to the One True God. After all, 92% of Americans say they believe in God, and there are 2.3 billion Christians in the world who would like to see our Divine Savior, Jesus Christ, getting some proper attention in blockbuster movies like JOHN CARTER.

At 132 minutes, JOHN CARTER tries to make sure viewers get their money’s worth of action and spectacle. The hero is handsome, the princess gorgeous, the bad guys nasty, and the faithful dog-like creature is fun. The character of John Carter is a paradigm for all the action heroes that came after him, including the comic book heroes that Hollywood is so fond of these days. The first Mars novel by Edgar Rice Burroughs was published in 1912 as a magazine serial. That was the same year that Burroughs also wrote the first Tarzan novel.

Regarding JOHN CARTER, caution is advised for young children, for some brief foul language, all the action violence, the references to the goddess, and the two scary creatures the hero fights. If anyone in your family chooses to see JOHN CARTER, a good discussion about saviors and salvation also would be in order.