"A Clash Between Forgiveness and Retribution" 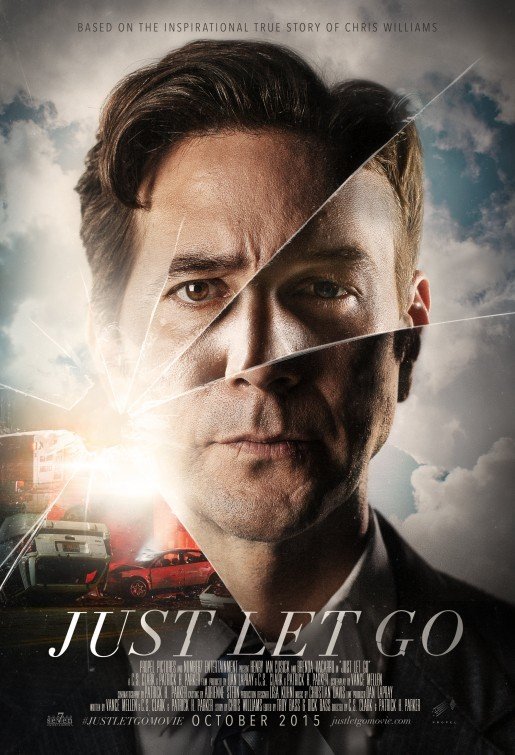 In JUST LET GO, Chris Williams loses his pregnant wife, her unborn child and their young daughter in a car accident caused by a drunk driver. His parents help Chris cope while he and his youngest son recover. His lawyers and grieving mother advise Chris to seek the maximum punishment for the 17-year-old who caused the accident. However, Chris is mysteriously sympathetic to the young man and has his best interests at heart. Though everyone wants retribution, Chris feels God calling him to forgive.

JUST LET GO has a positive moral message, but the script could be tightened to tell a more efficient, effective story. The movie seems 30 minutes too long. Some of the acting and dialogue could be better. While Christians will be happy with the moral, biblical message and allusions, they’re done within the context of the Mormon faith. Several scenes take place in a Mormon church. However, no specific Mormon heresies are espoused, and the script sticks to general Christian, biblical principles like forgiveness. Some brief foul language and bloody images warrant caution for JUST LET GO.

(BB, C, FRFR, L, VV, S, AA, M) Strong moral worldview with redemptive values promoting forgiveness rather than revenge or retribution plus a few references to Jesus and his way of doing things but in a Mormon context that, however, isn’t explicit in terms of Mormon theology that contradicts orthodox, biblical Christianity, man stands behind a pulpit and prays, but it’s in a Mormon church, a couple references to biblical stories, a scripture verse is displayed on the wall of a church, references to God performing miracles, and a story about Houdini believing in an unbiblical afterlife is told twice; five “h” or “d” obscenities; strong violence includes several flashback scenes re-enact a car crash, dead and badly injured victims shown in car after crash, bloodied man is carried away on a stretcher, bloodied man is shown being treated in the emergency room, pieces of glass are pulled from a man's back, character voices thoughts of suicide, news report on TV about a gunman killing people, man describes a car accident in detail along with how the victims died, pictures are shown in court of a deadly car crash site, a child being run over by a car is depicted, but the child is never actually shown; a woman briefly uses sexual innuendo; no nudity; a drunk driver kills five people in a car crash; no smoking or drugs; and, a woman advises a man to sue a minor for emotional damages, many people advise a man to seek maximum retribution for the death of his family members and disregard what God or the Bible may say about it, a son disobeys his father and talks disrespectfully to him out of anger.

JUST LET GO is a drama about the aftermath of a tragic fatal accident on a man and his family.

In JUST LET GO, Chris Williams is a God-fearing family man with four children and married to his wife, Michelle, who’s several months pregnant. Celebrating Michelle’s birthday, they all decide to go out for dessert and encounter a drunk driver while on a two-lane road. The driver swerved into their lane, striking the passenger’s side of the car where Michelle and their young daughter, Anna, were sitting. Having spent some time as a hospital orderly, Chris immediately recognizes his wife’s injuries as fatal. Only he and his youngest son survive.

While 9-year-old Sam undergoes extensive physical therapy to overcome the brain damage inflicted by the impact, Chris struggles to pick up the slack at home. His oldest teenage son withdraws in grief and anger over what happened and is disturbed by his father’s apparent lack of emotion. Chris’ parents try to help out wherever they can, but his mother is particularly upset and is also astonished that Chris isn’t being more aggressive in his court case. His lawyers all advise him to say or do things that will damage the defendant and cause the 17 year-old to be tried as an adult. However, for some mysterious reason, Chris is hesitant and expresses his concern for the young man’s well-being.

At work, a woman tells him he should sue and get financial retribution for the loss of his family members. Being pulled in so many directions finally takes its toll on Chris, and he breaks down in front of his sons. This release of grief gives him the strength he needs to pack up the belongings of his wife and children, even giving some away to those in need. He seeks God’s guidance on what to do and feels that God is calling him to forgive the drunk driver and let go any and all feelings of remorse. That’s hard enough to do from a distance, but his ultimate test of forgiveness occurs when he must come face to face with the person who destroyed his family and tell him what is truly on his heart.

JUST LET GO carries a positive message and is a big proponent of family values. That said, it could have been done much more efficiently and effectively. The script is all over the place, constantly swinging back and forth between the present and flashbacks of the accident or events immediately following it. This is a bit disorienting and is less effective in building up the drama surrounding such a horrific incident. It also feels about a half-hour too long. Too many scenes contribute very little to the story, move slowly, or could have been consolidated into a tighter storyline. As far as technicalities go, the post-production dialogue recording is blatantly obvious in many scenes, showing a less-than-stellar job done in the audio department.

Christians will be glad to know that this movie espouses many moral, biblical teachings, the primary being that we should forgive our enemies rather than seek revenge. There are also some references to Jesus. However, the characters are Mormon, and there are several scenes inside a Mormon church. So, the movie has a Mormon context. However, no specific Mormon doctrine is apparent, and the script sticks with generalities that Christianity teaches and that Christians believe.

The Jesus and god the Mormon Church teaches is not the same as the Jesus and the God of the Bible, the Word of God Written. Jesus is the Divine Son of THE One and Only God. The biblical Truth is that you are saved by the Grace of God through faith (Ephesians 2:8-10).

JUST LET GO also has some brief, relatively light foul language and a good amount of violence associated with the fatal car accident. Therefore, MOVIEGUIDE® advises a strong caution for that and the movie’s Mormon references.