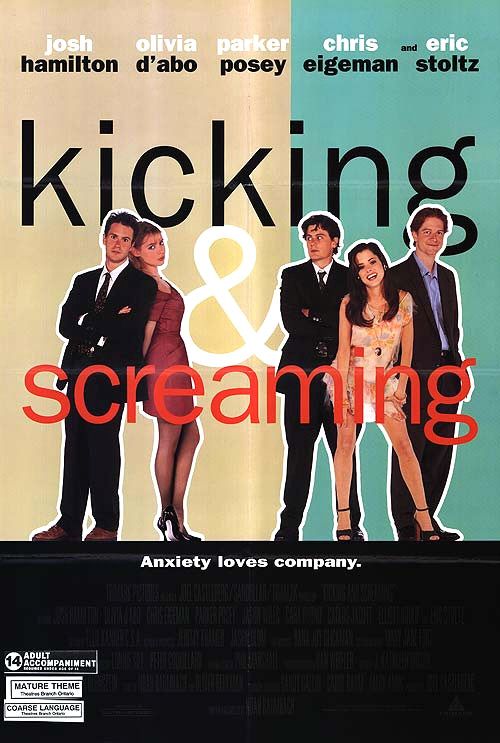 KICKING AND SCREAMING is a film about four young men about to graduate from college, who face life with a fair amount of terror and anxiety. They are further grieved by the fact that their girlfriends are growing up with grace. While the film is entertaining and the cast gives good performances, the film is irreparably marred by foul language, fornication, voyeurism, and nudity.

KICKING AND SCREAMING is the debut effort of writer and director Noah Baumbach. It tells the story of four young men about to graduate from college. They face life after college with terror, trepidation and insecurity. It does not help that their girlfriends seem a lot surer of themselves. Grover does not understand why the love of his life, Jane, is going to Prague on a study grant. Therefore, he has a series of affairs with younger college girls. Max is pessimistic and cynical. Otis is unhappy that he has to move geographically to go to graduate school. Finally, Skippy does not want things to change. In short, none of them want to grow up and face the realities of life. Chet (played well by Eric Stoltz) continues to be an undergraduate for 10 years. The boys booze, discuss their angst and linger on in college.

The film is refreshing in its directorial style. Loose framing and wide shots contrast with the intense internalizations of the character. The humor is sharp and intelligent and gives added dimensions to the dilemma in the story. The cast blends well together and displays good chemistry. The film is funny, witty and good natured, but it is irreparably marred by the usual inclusions of promiscuity, sexual scenes with nudity, strong foul language, and a father who talks about his adulterous affair.