KING OF THE HILL 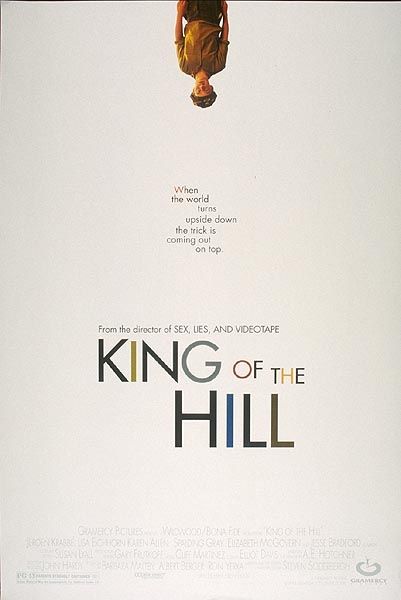 KING OF THE HILL is an extremely well-crafted tale of a resourceful thirteen-year-old boy who survives abandonment and deprivation during the Great Depression. While its final moments are satisfying, the trials which form the core of the story may leave the viewer wrung out and certainly make it unsuitable for children. Regrettably, Aaron's lying (mainly to save face) and petty thievery are moral issues with which this film never comes to grips.

BASED ON an autobiographical novel set in St. Louis during the Great Depression, KING OF THE HILL is an exquisitely crafted and poignant tale of a boy who survives abandonment and deprivation. We first meet Aaron Kurlander, an excellent student, in his eighth-grade classroom, bluffing through a class exercise in which he claims to be linked to the rich and famous. He and his family actually live in a deteriorating hotel with other down-on-their luck individuals who fight continually to avoid eviction. Aaron’s father sells decorative candles door-to-door, his mother has a worrisome cough and to conserve their meager income, the parents agree to send Aaron’s brother, Sullivan, to live with a relative. Then, the father gets a better sales job in another state, so Aaron has to remain alone in the hotel for a time. This situation taxes Aaron’s resilience, but in the end, the family is reunited.

While its finale is emotionally satisfying, the trials which form the core of the story may leave the viewer wrung out and make it unsuitable for children. However, there is food for thought about the value of an intact family, bearing up under adversity and preserving moral values in a crisis situation. Regrettably, Aaron’s lying (mainly to save face) and petty thievery are moral issues with which this film never comes to grips.