LIFE AS A HOUSE 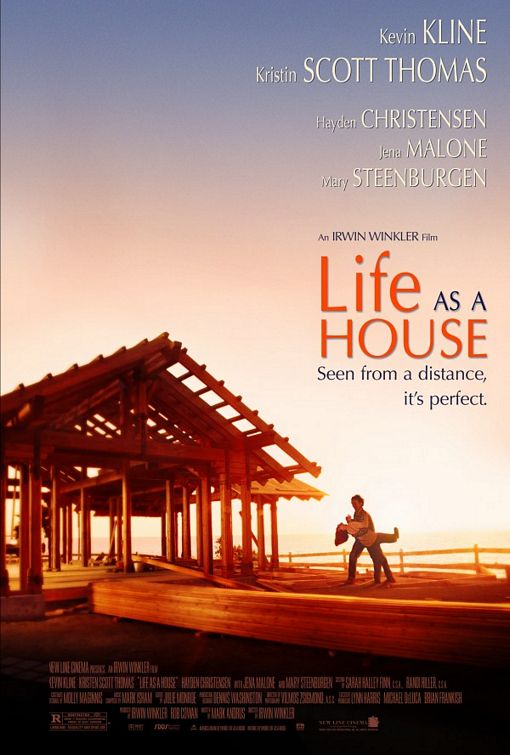 LIFE AS A HOUSE is about George Monroe (Kevin Kline), a middle-aged architect who is confronted with his mortality and chooses to work on the dream he put off for two decades – tearing down his old house and building his dream home. He invites his suicidal, drugged-out, estranged son to join him for the entire summer. Soon, his ex-wife joins in the construction, and the two find out that George has terminal cancer. As George works on the house, he works on his ex-family’s relationships and realizes he must pull from within the strength to make things new. Through a series of hard work, humorous mishaps and brave relational encounters, tragedy is turned to triumph for a shattered family, and wrecked lives enter the paths of restoration.

Though the filmmakers of LIFE AS A HOUSE accurately land on a prime issue of our troubled world – the lack of good fathering, the movie is marred by too many sex scenes, including a Mrs. Robinson-type fling and a homosexual prostitution subplot. There are many satisfying moments of redemption and healing, and even some Christian allegory, but the overuse of sexual promiscuity tends to overshadow the universal truths portrayed.

LIFE AS A HOUSE is the story of George Monroe (Kevin Kline), a middle-aged, divorced architect who gets fired after 20 years of model building at his company. On the way out the door, he collapses onto the one model he has been allowed to keep, and he finds himself in an austere room at a hospital. He quickly learns he has terminal cancer, and a kind nurse feeds him and touches his face as she comforts him. He remarks that he hasn’t been touched in years.

Because he is dying, George decides to reacquaint himself with his drug using, body-pierced, suicidal, Marilyn Manson-following son, Sam (Hayden Christiansen). He forces the reluctant Sam to spend the summer with him in his shabby home, which is situated on a breath-taking peninsula over the Pacific Ocean. He invites Sam to help fulfill his dream of tearing down the old place and building a gorgeous, new self-designed home on the bluff.

Sam has problems of his own, though. His “friend” at school is tempting him with big dollars for engaging in homosexual prostitution; he is addicted to drugs and violent music; and, he has dysfunctional family relationships without affection or parental involvement. George’s neighbor’s daughter, Alyssa (Jena Malone), is trying to seduce Sam, as she (falsely) believes he is a homosexual, and she wants to convert him back to heterosexuality. Sam reminds his father that he has nothing to offer him, and he begins to list all the material things he needs. He accuses his father of trying to draw him in after a lifetime of neglect. George responds, “Today, I care. I’m sorry for everything that happened until today, but today I care.”

After many heated arguments, father and son begin relating honestly and building the dream home together. The ex-wife, Robin (Kristen Scott Thomas), going through a bad marriage herself, starts bringing lunch to the men each day, and eventually she helps with the construction as well. During the building process, the ex-family begins discussing the issues that tore them apart and remembering what kept them together in the beginning. George admits that he hated his own father, a selfish, neglectful alcoholic who eventually killed his mother and another lady in a car accident, leaving a wounded little orphan girl behind. George tells how his own father always made him feel small, either with words or violence. He tells Sam that he sees the same father-hate in him and wants to do anything to stop the pattern. Sam tells his father that he is barely alive. They talk about how it feels “not to feel.”

One day George admits he is happy, primarily because he is remembering the sweet time of Sam’s early childhood, where they played in the ocean, father holding and bouncing son for hours. Robin shows up with a recording of “Bows and Flows (of Angel Hair),” to which she and George dance in the gorgeous sunset. Sam watches wistfully, now looking better (and less pierced) than ever.

When Robin returns home, she has a discussion with her husband, and he admits that all he is what he owns. He suggests they go away somewhere, but she refuses, insisting on seeing her son through the building project, the first responsible thing he has undertaken in ages. The husband leaves.

As the movie progresses, issues are addressed and relationships are healed, rebelliousness turns to love and life, and true love, affection and self-sacrifice are restored. Old structures are torn down, literally and figuratively, and life springs forth from death. In the end, it is the process, the journey that is all-important, rather than the finish.

LIFE AS A HOUSE is one of the most beautifully filmed, well-written, poignant movies, truly striking the chords of every one of us that has ever had a father or ever longed for true restoration, belonging and affection. Again, just as in HEARTS IN ATLANTIS, Hollywood is showing that it truly understands the importance of the father (though in that movie the answer was in a psychic). They showed that every child, and every person, for that matter, needs overtly displayed father-love and father-affection in order to thrive in this world. The view of one’s father determines the view of God — every time. If Dad was distant, neglectful, hostile, so is God, and the world is bleak and uncertain. If Dad is loving and affectionate, caring and affirming, the world has hope and life.

This movie shows a father doing his best to reverse the generational curses of his own life, and impart life to a family long forgotten. The theme is “life through death,” the message of the Cross in a nutshell. The characters even spoke of the importance of building a new foundation on a rock!

Unhappily, in LIFE AS A HOUSE, loose sex is had by all, and lust prevails in many a scene. There are so many useless and senseless and far-fetched depictions of sex that it borders on the ridiculous. Why mar such a great allegorical story and such poignant universal truths with so many smutty side-scenes?

About a third of the way through the movie, I had planned on ranking this movie on my “top ten” list. As I grew more disgusted with the stupid sex themes, however, I crossed out that “note to self.” Now I can only suggest this movie for the most hardened of viewers – those able to completely filter the inane, spitting out the bones and tasting the meat. What a shame! If you are wise enough not to be interested in seeing an overdose of sex in an otherwise good film, just remember the theme, and shower your spouse and children with a lifetime of spoken love and physical affection. It will be life to their soul – and to yours.