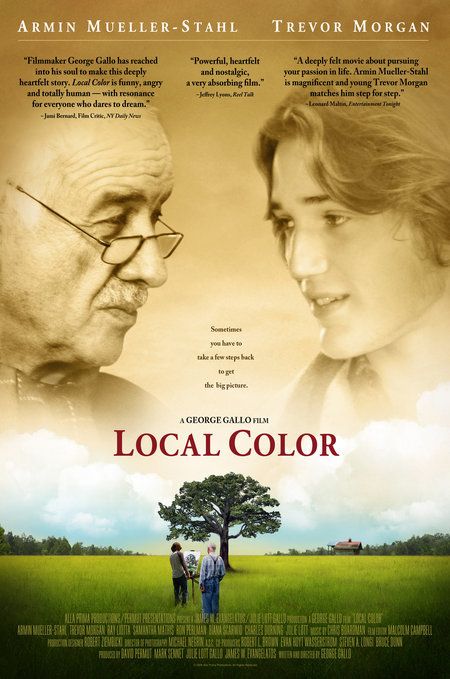 LOCAL COLOR is a somewhat boring independent movie about a young, aspiring artist. The artist, John, befriends a cantankerous, bitter old Russian painter, Nicoli, in hopes of learning the secrets of painting. Against his father’s wishes, John travels to Pennsylvania with Nicoli to stay at his summer home. At first, Nicoli tries to dissuade John from his dream. As their friendship grows, John’s enthusiasm for painting and his determination rekindle Nicoli’s own artistic passion.

LOCAL COLOR contains some commendable elements with a light Christian worldview and pro-Americanism that the Nicoli character seems to espouse. Nicoli speaks of making peace with mortality and bowing to a higher power, but in the end his healing is devoid of God. Sadly, the movie lacks many production values. For example, the dialogue concerning painting is hard to follow, especially for someone unfamiliar with it. Although Armin Mueller-Stahl does an excellent job portraying Nicoli, the rest of the acting seems stilted and one-dimensional. This makes it hard for viewers to relate to the characters. Overall, MOVIEGUIDE® advises extreme caution due to the movie’s excessive foul language, alcoholism, strong Romantic worldview, and its stereotype of an anti-homosexual character.

(RoRo, C, AC, P, Ho, LLL, V, S, AA, D, M) Strong Romantic worldview where characters are encouraged to follow their hearts and pursue their dreams against the odds, with some Christian elements including character who responds yes to the questions, “Do you believe in God?” and “Do you believe your prayers are heard?” and character states that, in order to make great art, people must make peace with mortality and bow to a higher power and says that art needs to uplift men’s souls, plus some anti-Communist, patriotic elements in that older main character’s family was killed during Stalin’s purges in Russia and he fled that country to emigrate to America – a country that he loves and has adopted as his own and homosexual content where movie attacks an extreme opponent of that lifestyle; 95 strong obscenities and 9 profanities; father hits son across the face; minor sexual material such as man eyes a couple of college girls, a couple of sexual references, light kissing, and some homosexual references; no nudity; strong alcohol use including one alcoholic character and young underage boy occasionally drinks a glass of vodka when it is offered to him; light smoking depicted; and, lying, boy disobeys parents to pursue his dream, one character’s history includes getting pregnant out of wedlock but she kept her baby, father is extremely anti-homosexual and fears his son might be a homosexual because he is a painter and associates with older men, older main character has a very negative outlook on life due to the pain of past experiences and, although his outlook changes, it is devoid of God, and a poor parental role model.

LOCAL COLOR is a somewhat boring independent movie that tries to be original and entertaining, but never quite reaches its full potential as the positive elements are ultimately spoiled by excessive foul language, alcoholism, and an extremely anti-homosexual character who is violent. Also, audiences unfamiliar with the painting terms used by the characters will find themselves lost and disengaged from the story.

The story opens in 1974 with John (played by Trevor Morgan), a young, aspiring painter with little opportunity for art education having to seek out his own means of learning and study. Upon discovering that famous Russian painter Nicoli Serrof (played by Armin Mueller-Stahl) lives nearby, John initiates a tenuous friendship with him.

Against the wishes of his violent and severely anti-homosexual father, John travels with Nicoli to his summer home in Pennsylvania in hopes to further his painting skills, only to discover that the cantankerous old man, suffering from self-guilt, bitterness, and deep sadness has lost his passion for painting and no longer finds any meaning or purpose in it. Rather than teach John the secrets to becoming a master painter, Nicoli puts him to working fixing up the house in an effort to dissuade John from his dream.

Through the challenges, John’s determination and enthusiasm for painting eventually helps Nicoli rediscover his artistic passion and move past the bitterness in his heart.

LOCAL COLOR contains some commendable elements in regards to the light Christian worldview that the character of Nicoli seems to espouse when he speaks of making peace with mortality and bowing to a higher power, although in the end his healing is devoid of God. Other positive elements include the passionate and hard-working character qualities of John and the friendship that forms between he and Nicoli.

Sadly, there are many production elements lacking in the movie. For example, the dialogue concerning painting is difficult to follow, especially for someone unfamiliar with it. Although Armin Mueller-Stahl does an excellent job portraying the character of Nicoli, the rest of the acting seems stilted and one-dimensional, making the characters difficult to relate to by the viewer. This is also due in part to the plodding, mediocre script that doesn’t allow for much genuine character development. The filmmakers seem like they are trying too hard to be original, and have ended up with a movie that is a bit over the top, almost cheesy, so to speak.

Overall, MOVIEGUIDE® advises extreme caution due to the movie’s excessive foul language, alcoholism, Romantic worldview, and its stereotype of an anti-homosexual character.