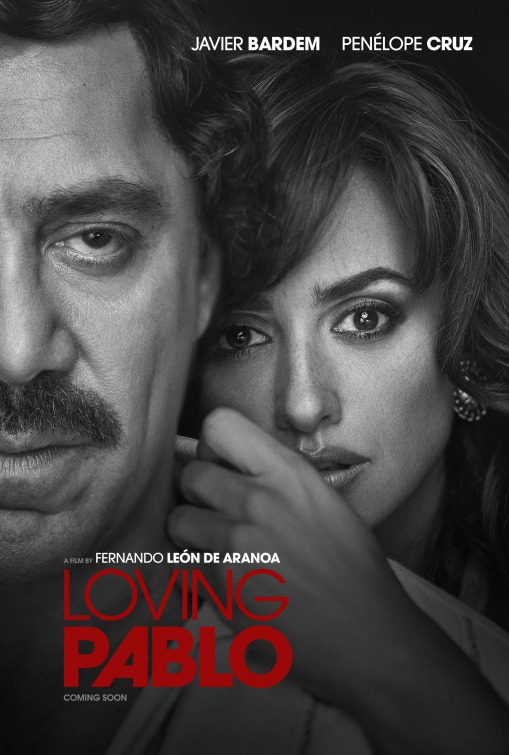 LOVING PABLO is a Spanish-English drama based on the true story of Colombian drug lord Pablo Escobar and his affair with television celebrity, Virginia Vallejo. The movie takes place in Columbia during the 1980s when Pablo became famous as one of the most well-known drug lords. Although Virginia fell in love with Pablo, she constantly wrestled with her desire for him versus turning him in for illegal activity. Eventually, she turns him in to the United States government.

LOVING PABLO is certainly eye-catching with images of gory, graphic violence and sexual promiscuity from girls in skimpy clothing dancing in clubs, not to mention the heated love affair between Pablo and Virginia. However, the movie seems to focus more on the glitz and glamour than the story at hand. Virginia’s elaborate outfits and silly changing hair styles seem to be more important than her feelings of passionate love for a criminal. This movie would have been much more impactful with less voiceovers and more developed characters. LOVING PABLO contains heavy foul language, extreme violence, drug dealing, and sexual promiscuity, making it unfit for anyone.

(HH, PaPa, B, LLL, VVV, SSS, NN, AA, DDD, MMM):
Dominant Worldview and Other Worldview Content/Elements:
Strong humanist worldview with strong pagan hedonistic elements stresses that man has no soul, drug dealer kills and murders anyone in his path with no remorse to gain as much money and power as he possible can, drug dealer’s followers murder innocent people without regret or mercy, plus minor moral elements where celebrity journalist wants to tell the truth about the crimes her evil lover has committed, but her love for him often triumphs, though, in the end, she comes around and confesses his crimes and whereabouts to the U.S. government;
Foul Language:
At least, 30 obscenities (many “s, f, b” words) and 20 profanities taking God’s name in vain;
Violence:
Extreme violence, heavy action violence and bloodshed where soldiers and drug dealer’s followers kill numerous innocent people, drug dealer’s followers tie a vicious dog to a man’s back while the dog eats the man alive, followers choke two business men with a rag and chainsaw their bodies in half, young boys kill other boys, and bloody, dead bodies depicted often;
Sex:
Heavy sexual immortality includes drug dealer walks around with his shirt off frequently and abuses himself in front of women, drug dealer touches himself frequently when aroused, married man has numerous affairs, married man has a public affair with female TV celebrity, married husband goes to clubs and receives lap dances and parties with young women, married man has no respect for women and inappropriately touches their breasts and bodies and rear ends without consent, numerous shots of women in bras and tight pants at clubs, married man passionately kisses lover, references to prostitution, and shots of woman and married man engaging in sexual intercourse but both are clothed for the camera;
Nudity:
Silhouette of a naked prostitute is shown but with dark shadows around her it’s hard to see graphic details of her naked body and an image of a man’s rear end;
Alcohol Use:
Strong alcohol use, drug dealer and his followers drink whiskey and beer at every meeting, partygoers drink lots of mixed drinks at drug dealer’s elaborate parties, drug dealer drinks alcohol at clubs with friends, and drug dealer and his mistress drink wine together at romantic dinners;
Smoking and/or Drug Use and Abuse:
Heavy smoking and drug use, the entire movie is based around drug’s dealer’s possession and sales of cocaine, images of cocaine being packaged and sold, shots of men snorting cocaine at a party, images of young boys high on cocaine shooting people with machine guns, and men and women smoke cigarettes heavily throughout the movie as a cultural norm
Miscellaneous Immorality:
Heavy miscellaneous immortality includes bad role models, dysfunctional family portrayals, gangsterism, blackmail, lying, cheating, and corruption.

LOVING PABLO is the true story of journalist and television presenter, Virginia Vallejo, and her love affair with one of the biggest drug lords in history, Pablo Escobar. Based on her memoir, LOVING PABLO, HATING ESCOBAR, this dramatic movie depicts the journey of her life with one of the most powerful, dangerous men in history.

LOVING PABLO starts out with a voiceover by Virginia Vallejo, played by Penelope Cruz. The entire movie is told through the use of her voiceovers to connect the audience to the next scene. However, with Cruz’s heavy dialect for the character of Virginia, and no subtitles during the voiceover, it can be a challenge to understand what she’s saying. The voiceovers happen so frequently and contain so much pivotal information in her life that they prompt the question, Why not show instead of tell?

The movie opens at a mega-huge flashy celebrity party Virginia’s been invited to attend. Vallejo, a successful woman with her own TV show, doesn’t need a man to advance her career. At the party, she meets Pablo Escobar, the fabulous party’s host. She’s immediately drawn to the married man for his fearless, overly confident demeanor. In turn, she mesmerizes Pablo because she’s a strong woman who doesn’t need his money. Virginia is quite different than the string of ladies Pablo is used to because of his wealth and fame. They don’t really need each other to progress their careers, and they like that. Pablo tells Virginia he’s throwing the party to raise money for the homeless, but a voiceover in the next scene says the party is actually meant to honor Escobar for becoming king of the infamous Medellin drug cartel in Columbia.

Virginia interviews Pablo for her TV program, and the two become romantically involved. Virginia pretends she believes he’s raising all this money to help the homeless, but she’s a journalist and knows the truth. However, she doesn’t reveal her knowledge to anyone and begins seeing Pablo more frequently. They go to dinners, get drinks and often sleep together.

Later, a huge airplane drops off tons of cocaine in Florida, and traffickers come from all over to collect it. The United States government is furious at Pablo for smuggling cocaine illegal into the country, and they are after him. Meanwhile, Pablo’s own sensible, loving wife begs him to stop his illegal activity. Instead of stopping altogether, Pablo turns his attention to politics in his country to guarantee safety for his wife and children. He makes sure the candidate on his side wins by helping finance his political campaign. Now, Pablo has his country’s leaders on his side. His wife gains peace with this paid protection, but the U.S. government is onto Pablo. They want him dead.

The movie’s first half is more like an over the top soap opera. However, the second half becomes a suspenseful thriller as American Agent Shepard fights to get Virginia to confess where Pablo is, so they can capture him and end the madness of death, famine and war started by the drug cartels. Pablo builds himself an elaborate prison, protected by his own army, but his safety can’t be ensured.

Virginia goes to visit him there. She’s furious. She has lost her job, reputation and money, because her affair with Pablo has become public. She’s also threatened daily and fears for her life. Virginia begs for money to escape to Europe, but Pablo has nothing to give her.

Heartbroken and enraged, Virginia calls up Agent Shepard. In request for protection from the USA and the chance at a normal life, she agrees to confess everything she knows about Pablo. Pablo Escobar’s life soon will be over.

Although LOVING PABLO is based on a story that deserves to be told, the movie falls short of telling it. With excess shots of partying, women, clubs, designer clothes, and violence, it skips over pivotal moments to showcase the relationship between Pablo and Virginia. There was love there, but the movie conveys it more like a dramatic, flighty soap opera. The excess use of voiceovers doesn’t add value to the story either. With extreme graphic violence, bloodshed, sexual promiscuity, profanities, drug content, and horrific role models, this vile movie is not suited for children, teenagers, families, or human beings.