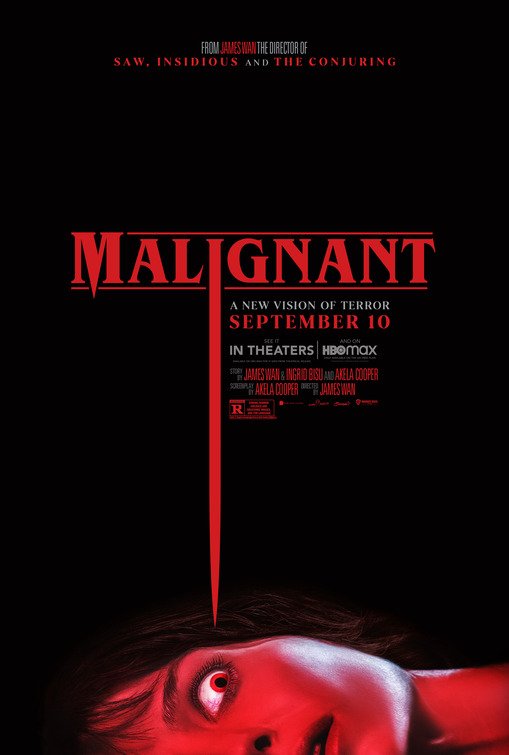 MALIGNANT is a gory revenge tale. A patient named Gabriel is subdued at Simion Research Hospital after a bloody killing spree. Flash forward 28 years. Madison is a married woman who’s lost several children in the womb. Her abusive husband attacks her and smashes her head against the wall, knocking her unconscious. However, something evil is awakened, and her husband is violently murdered. Madison begins seeing real murders as they happen. With the help of her sister and two homicide detectives, she tries to unravel the mystery of her visions so they can stop the vicious killer.

MALIGNANT is a gory bloodbath. The movie’s cinematography creates some interesting, unique, creative visuals. MALIGNANT has a strong, but dark, storyline and a surprising twist that sets it apart from other slasher movies. However, though the protagonists are trying to stop the vicious killer, the movie presents a new array of disturbing ways to kill people. The movie’s last 30 minutes contain what may be the highest number of grisly murders of any ending ever. MALIGNANT also has an excessive amount of gratuitous foul language.

(B, C, PP, O, LLL, VVV, MM):
Dominant Worldview and Other Worldview Content/Elements:
Light moral worldview with redemptive elements where woman, with help from her sister and two homicide detectives, must stop a mad killer with supernatural strength and occult abilities to take control of another character’s body, and where woman’s adoptive mother claims that if she had loved her enough she could have healed from her traumatic childhood, and where killer’s birth mother asks him for forgiveness and admits she should have loved him no matter the circumstances, plus some pro-life elements recognize unborn babies as human life
Foul Language:
At least 26 obscenities (including 11 “f” words), six strong profanities and 11 light profanities
Violence:
Excessive and gratuitous violence throughout, including a multitude of gory, grisly murders, plus some strong action violence in a horror setting
Sex:
None
Nudity:
None
Alcohol Use:
No alcohol use
Smoking and/or Drug Use and Abuse:
No smoking or drugs; and,
Miscellaneous Immorality:
Revenge, hatred, lack of forgiveness, and mental and emotional abuse.

MALIGNANT is a gory bloodbath about a woman, Madison, who lives with an evil conjoined twin in her brain. Madison initially believes the series of horrendously violent murders she sees are only in her mind, but she discovers they are a terrifying reality of revenge. The movie tries to present a new array of disturbing ways to kill people, as well as what may be the highest number of grisly murders in the last 30 minutes of any horror movie. MALIGNANT also has a fair amount of foul language and mental abuse.

The movie begins at Simion Research Hospital, where some type of violent monster named Gabriel, on a killing spree, is subdued by Dr. Weaver and her two associates.

Flash cut to 28 years later. A pregnant nurse, Madison, is violently attacked by her husband. After he smashes her head against the wall, something evil is awakened. Madison’s husband is the victim of a grisly murder, while Madison is admitted to the hospital for a sustained head injury, and the death of her pre-born child.

Nursed back to health by her supportive sister, Sydney, Madison insists on returning to her home where the crimes were committed. She quickly discovers that the evil intrusion isn’t finished with her. At times the evil entity chases her down in what results in a series of “jump scares” for the audience. Also, Madison begins to see visions of gory violent murders. Later, she sees news reports of the crimes she’s witnessed in her visions.

With the help of Sydney, and two homicide detectives, Madison searches for answers. The victims are doctors who can be traced back to Simion Research Hospital, the same place where Gabriel went on a killing spree and where Madison was treated before she was adopted at age eight. Uncovering her forgotten past as a patient at Simion Research Hospital is the key to unlocking who Gabriel is, how he feeds off Madison, and why he wants revenge.

MALIGNANT is a gory bloodbath. The movie’s creative cinematography presents some interesting, unique visuals. MALIGNANT also has a fairly engaging, but very dark, storyline and a surprising twist that sets it apart from other slasher movies. However, though the protagonists are trying to stop the mad killer, the movie presents a new array of disturbing ways to kill people. Also, the last 30 minutes contain what may be the highest number of grisly murders in any ending ever. MALIGNANT also has an excessive amount of gratuitous foul language, including some “f” words and strong profanities.