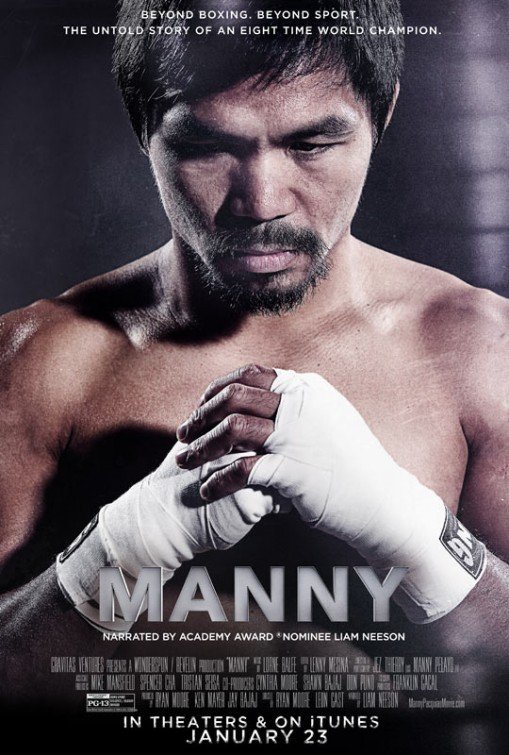 MANNY is the documentary story of an incredible boxer, Manny Pacquiao, who came from an impoverished family in the Philippines. Manny was born in the countryside of the Philippines to an impoverished family. At a young age, he was the provider for his family, so he started boxing to make money. Manny moved up the boxing ranking very fast, as he started winning his matches. His boxing career and a foray into politics takes a toll on his marriage and family, however.

(CCC, BB, Pa, VV, S, N, A, M) Very strong Christian worldview with prayer, scripture and conversion, with some immoral pagan elements when it’s mentioned that Manny had mistresses and gambled; no foul language; boxing, hitting, fighting, punching, all within the boxing ring, with some blood; kissing between Manny and his wife, mentions of affairs; upper male nudity; mentions of drinking; no smoking or drugs; and, lying.

MANNY is the documentary story of an incredible boxer who came from an impoverished family in the Philippines. MANNY is a true story of an underdog, but shows a Christian worldview with a Christian conversion.

Manny Pacquiao was born in the country side of the Philippines. His family was so impoverished that they lived in a hut. The family moved to the city of Milina when he was young. Manny did not even know what a car was until they moved.

At a young age, Manny was made the man of the house, caring for his siblings and helping provide. He started boxing to get some money and told him he was older in order to do so. Even though Manny was younger and skinnier then many of his competitors, he was fast and good. At first, Manny just got a few dollars, but little by little he was moving up in the rankings and making more and more money.

It wasn’t long until Manny was able to go to the United States to compete. He then found a new trainer, Freddie Roach, who himself had competed and done every well. In the movie, Freddie says that he may have gotten Parkinson’s Disease from boxing and therefore could not continue the sport.

Manny continues to do better and better boxing, winning almost every match. He decides to also go into politics, representing a province in the Philippines. All of these activities take a toll, however, on his marriage and family.

MANNY is a good documentary that has a Christian Worldview. Manny himself grew up as a Catholic and said every win was up to God. When Manny strays a bit, he has a powerful conversion experience. The movie shows this and has a great message of God’s Will and guidance. However, the movie does have a lot of boxing scenes, so the boxing violence isn’t appropriate for younger children or other sensitive viewers.

MANNY is a well-done documentary. Of course, with a documentary, the editing is a key aspect, and MANNY was edited well enough to create a good storyline. The movie really shows a captivating behind-the-scenes look at the world of boxing.