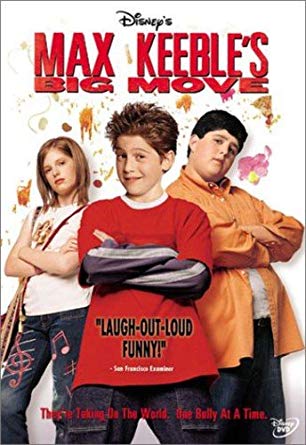 Seventh grader Max Keeble, the title character in MAX KEEBLE’S BIG MOVE, dreams of vanquishing the bullies in super-hero style. One bully dips him in mud and covers him in garbage, whereupon Principal Jindraike singles out Max in front of the school. On the way home, a scary ice cream man attacks him with ice cream, and he finds out that Jindraike is threatening to level his favorite animal shelter. Just in time, Max finds out that his family will be moving to Chicago at the end of the week, which means that he can exact revenge on all these bullies – without consequence! Max devises an elaborate scheme whereby he gains some respect from his classmates, but alienates some true friends. When Max finds out he is not moving after all, he must find the strength to undo his misdeeds and turn his school around.

MAX KEEBLE’S BIG MOVE is cute, funny and acceptable for all except very young children, who may be frightened by the bullies. The movie contains some disrespectfulness and over-the-top adult characters, but it delivers some good laughs and great lessons about loyalty, returning good for evil and facing one’s fears with wisdom.

(BB, Pa, V, M) Dominant moral worldview teaches the value of returning good for evil, maintaining loyalty to friends, perseverance, & boldness in triumphing over one’s fears; elements of pagan worldview with the ends justifying the means; no foul language; mild school-boy violence with bully pranks as protagonist is “tarred and feathered,” harassed for lunch money, held in bathroom with possible head-in-toilet “swirlie,” & generally intimidated on multiple occasions, plus a wild food fight in the cafeteria with teacher ending up in trash can; no sex; no nudity; no alcohol; no smoking or drugs; and, general sense of disrespectfulness to over-the-top authority figures.

Max’s super-hero dream is cut short, however, when the alarm goes off and real life resumes. Max says good-bye to his decorating-addicted mother (Nora Dunn) and his advertising executive father (Robert Carradine), who wears silly costumes for a tough employer, and he heads for seventh grade. Max rides the bus with his best friends, Megan and “Robe.” Max lets the clarinet-playing Megan know that band is not cool, and he will not be joining her, as previously promised.

At school, the students find out that the main bully, Troy McGinty, has formulated a new plan for his reign of terror. McGinty will open his leather jacket each day to reveal the name of his next victim, which is freshly painted on his white T-shirt. He will then hound that person until he bullies them sufficiently. Sadly for terrified Max, McGinty is now after him! It only takes a while for Max to be hunted down, dipped in mud, and covered in garbage. Max enters a school assembly thus arrayed, just as Principal Jindraike is announcing his plans for a new football stadium. Jindraike threatens the school that all must be perfect by the time his superior, Superintendent Nebworth (Clifton Davis), arrives.

Principal Jindraike has his own hilarious vocabulary. He announces that this year’s policy is not just zero-tolerance, but sub-zero-tolerance. He tells the students that he will “ex-courage” any and all misbehavior, and he singles out Max in front of the whole school. To make matters worse, Max has another encounter with the scary ice-cream man, who almost runs him over and shoots him relentlessly with ice cream. (The ice cream man was angry because Max’s mom called the health department on him once.) Max runs by the animal shelter, only to find out that someone has bought it up and will be tearing it down to build something. The animals will soon be homeless. Max rightly suspects Principal Jindraike and his stadium plans.

When Max gets home that day, he hears that his family will be moving to Chicago at the end of the week. His dad’s boss has demanded it. Max’s father tells him that “Sometimes you’ve got to do what people in power over you want you to do.” Max answers, “No, Dad, you’ve gotta stand up and show ‘em you’re not afraid.” At first Max is upset, but emotions turn to relief as he realizes that he can exact revenge on all the bullies – without consequence!

Max devises an elaborate scheme that includes putting animal-attraction chemicals into the principal’s breath spray, torturing McGinty with his childhood fear, a Barney-type “Mr. McGoogle,” starting a food fight in the cafeteria, talking back to his teachers, setting up the ice cream guy to double cross the extortionist, and other such plans. As he progresses in his scheme, he gains some respect from his classmates, and even some attention from the gorgeous, elusive Jenna. With his sudden popularity, however, Max misses an important date with his best friends, who have planned a going away party for him.

When Max gets home, his father tells him that, thanks to Max’s speech, he stood up to his boss, and now the family won’t have to move. Max is terrified, now realizing he will face the consequences of everything that he set into motion. Max decides to face it all, and he returns to school on Monday. He hides in the utility office, where the janitor tells him, “Any kid can make a mess; it takes a man to clean it up.”

Max concludes that “getting revenge on the bullies makes us the same as them,” and he seeks to find a better way to bring harmony to his peers. With the help of the band (now VERY cool), the animals at the shelter and some true friends, the school is again turned upside down, but this time with the wisdom that only comes from having attended the “school of hard knocks.”

MAX KEEBLE’S BIG MOVE is cute, funny and acceptable for all except very young children, who may be frightened by the bullies. The theme is “facing your fears in the right way,” and it is well demonstrated in this film. However, my eleven-year-old, Sarah, who helped to review the movie, commented that there was a disturbing air of disrespectfulness throughout the story. Except for the black janitor, all the adults were portrayed as way over-the-top caricatures who didn’t really listen or couldn’t really relate to children (implying that these adults were not worthy of respect . . .).

When asked what she learned from the movie, Sarah said, “Life really isn’t better if you’re just trying to act cool, but you don’t have real friends. You just can’t betray your friends!” Well said! (My trumpet-playing daughter also agreed that band was, indeed, cool.)

On another note, I did expect some more laughs from the actors who played Max’s parents. Robert Carradine and Nora Dunn have played some side-splitting roles in the past, but in this movie, they’re relatively mild characters. All in all, though, this is a cute family film. Proceed with slight caution, remembering to discuss with your children the issues of respectfulness, authority and loyalty to true friends. Also, tell them that “excourage” is not a word!