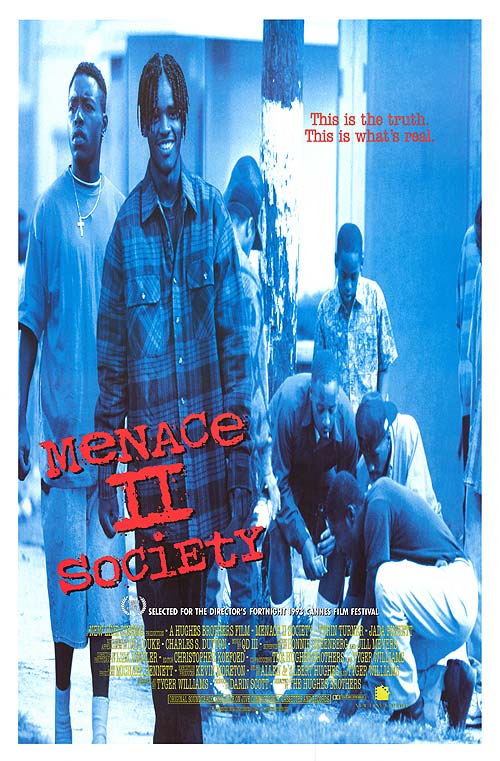 MENACE II SOCIETY is the product of MTV twins Allen and Albert Hughes and relates the story of an inner-city, fatherless, black youth who is consumed with anger, violence and despair. The well-made, documentary-like movie and winner of the 1993 Cannes Film Festival Director's Fortnight, contains moral carnage, anti-Christian bigotry and sociological explanations for the evil perpetrated on inner-city blacks.

MENACE II SOCIETY is a bleak, violent, despairing look at a young black man’s life from the time he is born to his violent death. Set in the Watts district of Los Angeles, the story chronicles a young black man’s life using a documentary-like approach complete with anecdotes that depict the futility of urban ghetto gang life. Caine, the young black man, narrates his story, telling of his drug-user mother and alcoholic father, both now dead. Following their deaths, Caine lives with his Christian grandparents. We are introduced to his circle of “gang-member” friends and his girlfriend. The movie is a continuous cycle of numbing episodes full of moral carnage and sociological explanations. In one scene, Caine questions a friend’s father about Allah. The father says, “If Allah makes him a better man than Jesus, then I’m all for it.” Christianity is portrayed as a nuisance and a crutch for the grandparents.

The film presents a realistic, violent look at the darker side of every urban neighborhood. The film’s focus is on the intensity of the new urban black and his contempt and hatred for his own race as opposed to targeting other races. The film was written and directed by twenty-one-year-old twin brothers whose theme of anger and despair prevails throughout.