"One Bad Apple Spoils the Kingdom" 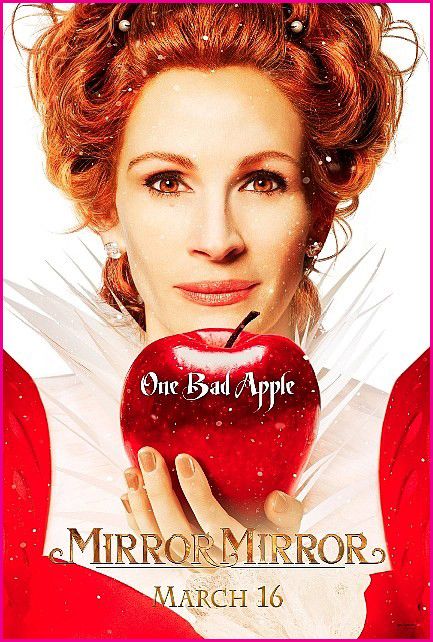 MIRROR MIRROR is a fun take on the classic Snow White story. This time, however, the story is told from the evil Queen’s perspective. After Snow White’s father dies, the Queen locks up Snow. Meanwhile, the Queen takes the townspeople’s money for her own selfish wants. A Prince comes to the kingdom. He meets Snow White and is instantly smitten, but the Queen wants him for herself. Knowing she must help the townspeople, Snow approaches the Queen. The Queen tries to get rid of Snow. She’s left stranded in the forest but meets the Seven Dwarfs. Together, Snow White and the Seven Dwarfs try to help the people and take back the kingdom for good.

MIRROR MIRROR is a funny, nicely crafted family movie. It has a very strong moral worldview showing that magic is harmful. It also shows that greed, vanity and selfishness are destructive. Snow White is a great heroic role model. She’s pure, kind and always tries to do the right thing. Some brief scary moments may be too much for young children. However, MIRROR MIRROR is definitely an appropriate move for the rest of the family.

(BBB, CapCap, ACAC, V, N, AA, M) Very strong moral worldview with a comment that “God’s great mystery is His plan,” and movie shows magic is bad, although there’s a song at the end credits saying “you’ve got the magic in you,” plus strong capitalist content that opposes totalitarian government, high taxes and stealing from the people for selfish ends; no foul language but some terms such as “twit” used and some light scatological comments; light violence such as sword fighting, hitting and knocking people out, and spanking; no sex scenes or sexual immorality but kissing and, when the evil Queen puts a “love spell” on the Prince, it actually is a spell for puppy love and he starts to lick her face; upper male nudity; implied drunkenness; no smoking or drug use; and, lying, stealing but looked down upon, greed and envy looked down upon, government taxing the people and misuses their funds.

Julia Roberts plays the evil Queen, who married Snow White’s father, the King. Almost right after their marriage, the King is riding through the forest and is killed, supposedly by the forest beast. At this point, the Queen is able to take full power of the whole kingdom. However, because of her selfish attitude, she takes and takes from the townspeople until they have very little. So, the kingdom grows cold and famished.

On Snow White’s 18th birthday, she’s told she is the one with the right to rule the kingdom, but the Queen has locked her up in the castle. After hearing this, Snow White sneaks out of the castle to visit the townspeople, something she would do with her father who loved the people. As Snow White enters the forest outside of the Castle, she comes across a Prince and his assistant, but the Prince has been tied up and hung upside down by some bandits. Clearly embarrassed, the Prince tells Snow White he doesn’t need assistance, but his servant pleads otherwise, and Snow is able to get them down. An instant connection is drawn between Snow White and the Prince, but she doesn’t let him know she’s a Princess and leaves.

Arriving in the town, Snow sees that people are no longer dancing and singing but rather hungry and sad. She suddenly realizes she needs to help them. This becomes her passion.

The Prince arrives at the Castle and meets the Queen. She’s instantly smitten and wants to marry him. She decides to hold a ball and tax the people for the money to do it. At this point, however, the Prince’s heart is already with Snow White. The Queen realizes this. She puts a spell on the Prince and decides to get rid of Snow White.

Knowing she must help the people, Snow White approaches the Queen. The Queen tries to get rid of her, and Snow is left in the forest. The Seven Dwarfs find Snow White. Charming them, Snow is able to stay with them, cook for them, and become like a mother. At the same time, the Seven Dwarfs decide to help Snow reclaim the Kingdom and help the people.

So, the question becomes, will Snow White be able to break the Queen’s spell on the Prince, reclaim his love, and regain the kingdom from the Queen’s evil magical powers?

MIRROR MIRROR is a funny, nicely crafted family movie with high production values. It has great comical characters. Because of its fairy tale attitude, though, the film sometimes feels silly and overacted. MIRROR MIRROR also has elaborate, wonderful costumes.

Overall, MIRROR MIRROR has a very strong moral worldview. It shows magic is harmful, and it’s clearly said that magic takes a toll. It also shows that greed, vanity, and selfishness are destructive. The Dwarfs have been stealing from the people, but once Snow White comes into their lives, she convinces them that stealing is wrong. They work together to reclaim the people’s money from the Queen, who’s wasting their money on her selfishness. Sounds like the governments of the western democracies, including the United States.

MIRROR MIRROR has a great, heroic role model. Snow White is pure and good. She always wants to do the right thing. There are some scary moments, however, for very young children, along with some fighting scenes.