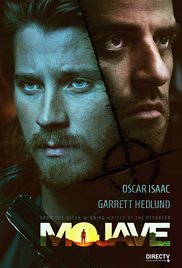 MOJAVE is about Thomas, a wealthy and famous actor and filmmaker, who journeys into the desert to escape his near-suicidal thoughts about life. As he’s clearing his head one night, he encounters a homicidal drifter. The two begin a wide-ranging talk about philosophy, including references to Jesus being tempted by the Devil in the wilderness. As the conversation escalates, it turns into a violent fight, leaving Jack badly hurt. Thomas leaves Jack in the desert, only to find out later after he returns home that Jack is now stalking him. Eventually, Thomas must face his unrelenting stalker and settle things once and for all.

MOJAVE is an odd movie that leaves many questions unanswered. The story has an uneasy, confusing feel throughout the whole movie, and it leaves viewers feeling unsettled at the end. Humanism runs deep throughout the storyline, despite the references to Jesus. Actions are taken by each character that lead to several scenes with alcohol, drug and sexual content. The movie also contains lots of foul language. Media-wise viewers probably will find MOJAVE an unacceptable piece of filmmaking.

(HH, PaPa, C, B, LLL, VVV, S, NN, AA, D, M) Strong humanist worldview with belief in only materialistic things, not in a supernatural world or God and strong pagan elements with an “anything goes” mentality where sensual pleasures and material goods are the main goal for several characters, plus very light Christian, biblical, moral content with references to misused Bible story of Jesus in the desert being tempted by the Devil, phrases of “selling your soul to the Devil,” a character refers to himself as the Devil, and a small reference to justice needing to be served, but the murderer still gets away at the end; 77 obscenities (mostly “f” words) and one JC profanity, plus implied urination in bathroom; very strong violence including a car crash, two men fight and wrestle with one eventually getting hit on the head with a weapon, police officer shot and killed, man murders another man in his house, one man beats another man with a stick several times, and one man shot with a gun and burned in his RV; slight sexual implications include woman in bed with implied fornication and adultery, plus a reference to oral sex; upper and rear male nudity as well as unclothed woman in bed and both a male and a female shown in their underwear; alcohol use throughout the whole movie with a couple appearances of wine glasses and alcoholic bottles and light drunkenness from several characters; main character smokes cigarettes several times plus one reference to a drug dealer selling illegal drugs; and, light levels of miscellaneous immorality and behavior such as lying, stealing, revenge, greed, and bad role models.

MOJAVE is follows the story of Thomas, a wealthy and famous actor/artist/filmmaker, as he journeys into the desert in an attempt to escape his near-suicidal thoughts about life. As he’s clearing his head one night, he happens to encounter a homicidal drifter. This leads to terrible consequences when the stranger follows an unsuspecting Thomas back home.

The movie opens with Thomas, a twentysomething filmmaker and actor played by Garrett Hedlund, complaining about the fame he’s had since he was 18, and how easy he’s been able to achieve every goal he’s ever had in life. However, Tomas is ashamed of this Hollywood life that has overtaken him, and how clichéd his everyday actions have become, including an affair with his mistress (Louise Bourgin) while his wife and daughter are abroad. This superficial lifestyle has taken a toll on his adult life, and thus begins his journey into the Mojave Desert in an attempt to escape his troubles and “find” himself again.

As Thomas drives his way into the vast open desert, he’s forced to continue on foot after he crashes and flips his Jeep, unable to get it out of the sand. Thomas settles in for the night next to a fire, but he’s rudely interrupted by a mysterious, dark drifter named Jack (Oscar Isaac). As this man invites himself to sit down and drink Thomas’s coffee, he begins to talk about the desert in relation to the Matthew 4 Bible story of Jesus Christ’s time wandering in the wilderness. He talks about the Devil and his tempting offers to Jesus, but quickly starts to misquote Scripture and add his own interpretations of who the Devil really is. Jack continues to talk about selling his soul to the Devil and possibly being the Devil himself in human flesh.

Both men start in this back and forth dialogue throwing wit, ideals and principles at each other as well as quoting Shakespeare and George Bernard Shaw. As the conversation escalates, it turns into a violent fight, leaving Jack badly hurt in the desert. Thus begins a cat and mouse chase throughout the rest of the movie.

While hiding away in a cave, Thomas accidentally kills an innocent police officer, thinking it was Jack looking for him. Now with more blood on his hands, Thomas quickly makes his way back to his Hollywood life, all while looking over his shoulder at every turn.

At this point, MOJAVE presses deeper into a stalker thriller as Thomas tries to deal with his past mistakes and plans for future actions. Viewers get small glimpses that Jack is creeping into the city and slowly finding out where his victim lives. Through an unfortunate meeting of a man and his dog, Jack’s able to hide out in the house of that man after killing him. He changes his appearance through hair and wardrobe, and then is off to continue his search of Thomas.

During this time, Thomas is trying to hide out and seek counsel from his lawyer, Jim (Walter Goggins), and his producer, Norman (Mark Wahlberg), neither of whom believe or can help him. The time eventually comes when Thomas has nowhere else to turn and must face his unrelenting stalker. The trail leads back to the desert.

MOJAVE is an odd movie. The beginning sets viewers up with many questions that are never quite answered. Viewers are first introduced to a man about whom they know nothing and are pulled into his life story suddenly lands him in the desert. This turn of events just raises many more unanswered questions.

MOJAVE has an uneasy, confusing feel throughout, almost as if it’s stumbling from one scene to the next, never quite catching its balance. With abrupt cuts jumping from one image to another, it has a very B-movie feel. It also seems to have a slight identity crises as the movie tries to decide what genre it wants to be, in addition to leaving viewers feeling unsettled at the end.

Humanism, the most dominant worldview of this story, runs deep throughout the storyline, characters and actions taken by each character. Director William Monahan portrays a very clear message that Thomas and Jack are only on this Earth for material things. Thomas lives a life of fame and riches, and Jack wants nothing but that kind of life, full of opportunities. Also, although there are small references to Jesus and the Bible, the movie’s predominant message is that man is the only protector and decision maker for his own life.

Because of that, there are several scenes relating to alcohol, drugs and sexual content, all of which are trying to fill this void that media-wise viewers know only God can fill. It’s a heartbreaking journey to watch these two men walk down a humanist path leading to nihilism. Additionally, justice isn’t served and one of the men gets away with murder. For all these reasons, MOVIEGUIDE® finds MOJAVE unacceptable viewing.