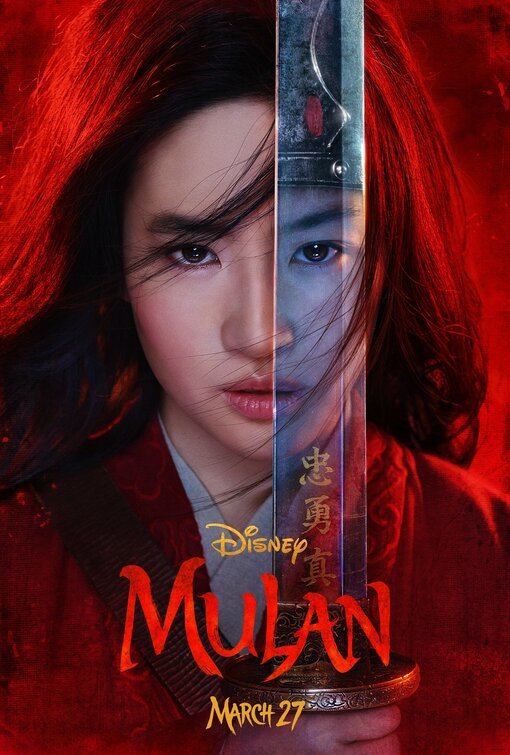 MULAN (2020) is a live action reimagining of the 1998 Disney animated adventure movie. Mulan is a young woman in Ancient China who disguises herself as a male warrior to take the place of her middle-aged father. The Chinese Emperor has drafted one man from each family to fight nomads trying to take back their own land. A witch is helping the nomads and wants Mulan to join her, but Mulan refuses. After an intense battle where Mulan saves the day, the nomads sneak into the imperial city with the witch’s help. Mulan leads a small group of warriors to save the Emperor.

MULAN is well-directed and produced, with terrific battle scenes and acting. The dialogue is clear, and the character arcs are powerful. However, MULAN has lots of strong false religious, occult content. It also has lots of ancestor worship and strong feminist revisionist history. This abhorrent content is mitigated by some morally uplifting, redemptive nods to the importance of loyalty, bravery, truth, sacrifice, and family. MULAN (2020) is a borderline Minus 3 movie because of all the witchcraft and false religion.

(FRFRFR, OOO, HoHo, FeFeFe, RHRH, B, C, VV, S, M):
Dominant Worldview and Other Worldview Content/Elements:
Ancient Chinese false religious worldview with lots of occult activity by a witch with a distinct teaching for several minutes on the chi that empowers the witch, the heroine and others, and metamorphosis of the witch into a hawk then into a flock of ravens, mythical phoenix bird is seen throughout the movie leading the heroine, lots of ancestor worship, woman dresses as a man to replace her crippled father in a military draft, and very strong feminist revisionist history, mitigated by some solid universal, morally uplifting, redemptive nods to the importance of loyalty, bravery, truth, self-sacrifice, and family
Foul Language:
No foul language, but male soldiers discuss women and relations in a bawdy manner
Violence:
Lots of violence includes a scene of dead soldiers piled up after a battle, people being killed in battle, people being stabbed and bludgeoned and otherwise hurt, but no blood, though a bit more intense than most Disney movies
Sex:
Sexual attraction between soldier and girl posing as soldier, light humor about same-sex attraction, the plot involves a young woman dressing as a man and having to live in the barracks with male soldiers
Nudity:
Woman dressed as man goes to lake at night to undress and bathe in the lake, and man sees her, but all the audience sees is her upper shoulders
Alcohol Use:
No alcohol
Smoking and/or Drug Use and Abuse:
No smoking; and,
Miscellaneous Immorality:
Disobedience to father so the heroine can keep him from going off to war, deception where heroine pretends to be a male soldier, but this deception is rebuked by a witch who says it will limit the heroine’s chi and by the commander who threatens to punish woman’s deception vigorously and does punish one soldier who engages in deception, and witch says women with power are outcasts so the heroine should join the witch in her battle with the Emperor.

MULAN (2020) is not a direct remake of the 1998 animated movie. Instead, Disney went back to the original Chinese ballad, which is very short, and created the story of a young woman with a lot of mystical energy, or chi, who goes to fight in place of her father with the imperial army against some attacking nomads. There’s lots of action, battles and killing as well as a powerful witch, who tells Mulan that she could be a witch too, and some good adherence to loyalty, bravery, truth, and family. MULAN is a very exciting, beautifully filmed movie with a great heartrending ending that will cover up a multitude of sins.

The movie opens in a fortress village, where everyone lives inside the walls of the round stone fortress. Mulan chases a chicken to get the chicken back into its coup. She is extremely athletic and acrobatic and chases the chicken all over the fortress, wrecking the village, including the phoenix in front of the ancestor worship temple. When she stops, her father is incredibly proud of her, but everyone else in the village, including her mother, is upset. She’s given a lecture that she needs to honor the family by becoming a wife and a mother when the matchmaker finds a match.

Meanwhile, somewhere on the western edge of China, the nomads, presumably Mongolians, are conquering one Chinese village after another with the help of a female witch who can transform herself into a hawk or a flock of crows. The nomad leader, called a khan, wants revenge against the Emperor for taking his land and killing his father. The Khan promises his warlords a lot of gold and booty, but one of them doesn’t want treasure, he just wants revenge.

When the Emperor hears of this, they call up all families in China to contribute one man in each family fight with the imperial army. Mulan’s father used to be a great warrior, but now he walks around with a leather leg brace and cane from his battle wounds. When he’s called up, Mulan takes his scroll, armor and the family sword inscribed with the code of the soldier Loyal, Brave, Truth.

Meanwhile, the Khan continues taking major cities. The witch can enter into a soldier or other person to betray the city.

Instead of her father, Mulan goes off with the troops. On her way, she encounters the witch who eventually tells her she has a tremendous amount of chi, or life energy, and is just like her, a witch. Mulan says she’s only going to serve the Emperor, and after an exciting duel, she recovers with the help of her phoenix, a vision of the mythical bird who leads her to the imperial city.

Mulan has wrapped a girdle around her chest to hide her femininity and joins a group of soldiers in their training and in their barracks. There are many funny instances where she has to avoid being found out, one where a soldier puts her arm around her sleeping. She pushes him away, and he puts his arm around another soldier. One soldier is attracted to her and probes her with questions to get her to like him. There’s a lot of double entendre. In the exercises, Mulan reveals her tremendous chi and prowess, and the general recognizes she is extraordinary.

Mulan and the other soldiers are sent to the frontier. Along the way, they pass the dead bodies of a brigade of defeated soldiers. In an intense battle, Mulan saves the day by causing an avalanche through misdirecting the enemy’s catapult.

After the battle, she informs the troops that these nomad battles are just a distraction and the real force is heading toward the imperial city, with the help of the witch hawk. At the imperial city, the nomadic soldiers sneak in when the witch uses her powers to open the gate and possess the body of the Emperor’s chief counselor.

Mulan has revealed herself as a woman, realizing that she can no longer lie. The rule among the soldiers is that, if you betray your fellow soldiers, it’s death, and if you lie, it’s banishment. Mulan is banished, but she makes a case that she should be saving the Emperor. So, she is allowed to lead a small group of warriors to save the Emperor.

Can the Emperor be saved? Will Mulan be killed for her deception? Will Mulan ever get back to her family?

MULAN is a very well-directed, well-produced movie. The acting is terrific, the dialogue is clear, the character arcs are powerful. It has some of the best battle scenes since BRAVEHEART, with clear focus and incredible comprehension of tactics, strategy and the need to know where the heroine is at all times.

The Chinese martial arts acrobatics are terrific. Once upon a time, before I was a Christian, I represented the first Chinese movie with aerial acrobatics, TOUCH OF ZEN, and got it into the New York Film Festival. Mulan takes those to another level.

That said, for Christians it has a lot of problems. The witchcraft and strong Chinese religious elements directly contradict both Scripture and Truth. Having grown up in the occult, they can be a very strong form of myth conceptions and bondage. If only you find the right way to use the incantation or use your chi, you can become a superhero. The movie’s feminism is clear, with the witch saying that women aren’t appreciated, and women with power need to become witches. The movie’s revisionist history is annoying, although it is clear that the nomads are attacking to revenge the attack of the Chinese on their villages. Even so, the Emperor is portrayed as a kindly old man. The witch is also a sympathetic character. Throughout the movie, there’s ancestor worship and tat the end of the movie, the ancestors are credited with the victory. The Book of Hebrews says God has appointed us to die once, so our ancestors are not around to take care of us. Also, the phoenix in the movie becomes a spirit guide to Mulan, which again is abhorrent to the Truth and another myth conception. According to the Bible, these spirit guides and ancestor idols are demonic. They promise success and victory but only deliver bondage because you sell your soul to the wrong powers in the world.

That said, there are some very good virtues in the movie, from a strong appreciation for family, very clear self-sacrifice, some wonderful cases of turning from the bad to the good, and of course, the virtues written on the sword of loyalty, bravery, truth, and family. The love interest motif is a little muddied, however, because, in the beginning, the attraction is between what another soldier thinks is a man who turns out to be a woman, and there are other humorous suggestions of homosexuality. In addition, much of the movie involves deception and cross dressing, though for a good purpose – to save the father and the fatherland. Many of these elements were not as pronounced in Disney’s animated version, so the animated version is more acceptable, but even so, those who are going to see the live action version should be forewarned and discuss the pitfalls and false religious elements in the movie.

MULAN (2020) is a borderline Minus 3 movie because of all the witchcraft and false religion, cross dressing and intense violence, but for discerning audiences who aren’t going to be affected by this problem, it could be considered just Minus 2.