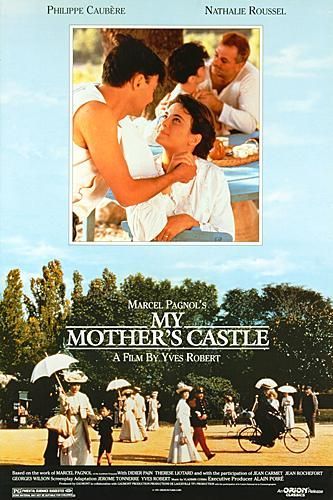 MY MOTHER’S CASTLE is a continuation of MY FATHER’S GLORY, the second part of popular French author Marcel Pagnol’s memoirs. It focuses on the pre-teenage Marcel and his relationship with his mother, Augustine, in turn-of-the-century Provence, in southern France. Acting and cinematography are both superb with the movie resembling a fine impressionist painting.

“The beloved shadows of the past,” is the way author Marcel Pagnol fondly remembers the delightful holidays spent with his family in the hills of Provence, in turn-of-the-century southern France. MY MOTHER’S CASTLE is a continuation of MY FATHER’S GLORY and the second part of popular French author Pagnol’s memoirs. The focus here is on the pre-teenage Marcel and his relationship with his mother, Augustine.

Typical of most long-ago remembrances, no doubt MY MOTHER’S CASTLE tends to be somewhat exaggerated; thus, the “castle” turns out to be a modest summer house filled with the essentials of life for a sensitive young boy. In fact, to Pagnol, the “castle” was a life-giving spring, a font where the family regenerated and renewed its closeness. Indeed, the “castle” was a place set apart, a sanctuary, where the family was permitted to frolic in a manner not allowed in the city by the officious, civil-servant father.

Some of the charming aspects of MY MOTHER’S CASTLE are the boyish Pagnol’s eleven-year-old pre-adolescent awkwardness as he recounts a submissive infatuation with a haughty “jeune fille” (Joris Molinas) as well as a tendency to be overcritical of his father. To be sure, the family holidays became welcome respites for Marcel, who as his school’s champion, faced a grinding academic competition that became even more intense by his schoolteacher father’s perfectionism.

An enjoyable sequence of scenes in MY MOTHER’S CASTLE involves the family cutting across the estates of noblemen in order to avoid a nine-mile, round-about walk to its house. Having tricked his fastidiously correct and somewhat paranoid father into these acts of high crime, the young Pagnol savors such shenanigans as the high point of his youth.

Once more, as in MY FATHER’S GLORY, Oncle Jules emerges as a dynamic Christian man. When the family decides to spend Christmas at their house in the hills, Uncle Jules shows up, arms full of presents for the children. He tells them he has just returned from mass. To Joseph (the father), Jules says, “You and the family were there.” Then he reaches out to Joseph and adds: “I begged Him (God) to grace you with His presence and give you the gift of faith.” Expecting a confrontation between Jules and her humanist/professed atheist husband, Augustine draws closer to Joseph as if to restrain him (we remember his anti-religious sentiments in MY FATHER’S GLORY). However, Joseph surprises everyone and embraces Jules saying, “Your prayer is a gift of your friendship to us.”

Marcel’s own religious sentiments come through as he enters a church on a Thursday when he is supposed to be in school and thinks: “Since Father told me, I knew God didn’t exist, but I wasn’t completely sure.” However, even though he isn’t sure of God, Marcel says, “I heard those hills calling me ‘I salute you!’”

The grown Marcel ponders, at the movie’s end, the “moments of joy obliterated by unforgettable sorrow” as he recalls three deaths of loved ones: his mother, Augustine’s, his younger brother, Paul’s, and his friend in the hills, Lili’s–”Such is the life of man,” he reflects sadly.

As MY FATHER’S GLORY, MY MOTHER’S CASTLE resembles an impressionist painting in its light, setting and style, it captures the tranquility and charm of Southern France. The camera uses the region’s full, gentle sunlight to maximum advantage to portray idealistically Pagnol’s youthful memoirs. The interiors, too, are washed with glints of all the right pastel hues.

Acting in the movie is superb, especially Ciamaca’s as the maturing Marcel, and Victorien Delmare as his staunch younger brother. Philippe Caubere as Marcel’s overly perfectionist but loving father, complete with stilted mannerisms and staunch demeanor, invests his character with the perfect blend of strength and weakness. Also, Nathalie Roussel turns in a superb performance as Marcel’s wise, intuitive, and loving mother and advocate.

MY MOTHER’S CASTLE convinces us, even as the earlier movie, that Proverbs speaks the truth when it states: “Train up a child in the way he should go: and when he is old, he will not depart from it” (22:6). In spite of Pagnol’s humanistic philosophy later in life, the influences of both his father and his mother can be evidenced, with his father’s atheistic philosophy winning out over his mother’s Christian faith–a sad turn of events, indeed, and one with eternal consequences.