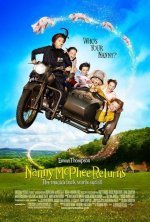 NANNY MCPHEE RETURNS, a sequel to the 2005 hit, is set in the rural countryside in England, in a stylized version of the World War II era. Nanny McPhee appears at the door of a harried young mother, Isabel Green, who is trying to run the family farm while her husband is away at war. Isabel’s three children, Norman, Megsie and Vincent, are fighting a war of their own against two spoiled city cousins, Cyril and Celia, who have just moved in after their divorcing parents sent them to the farm for protection. Nanny McPhee teaches the children some valuable lessons with the occasional aid of some magic. Also, Cyril and his stuffy father begin to reconcile, and family is extolled.

NANNY MCPHEE RETURNS is delightful, charming, funny, and winsome, more so than the first movie. It also teaches good values, such as helping one another, sharing nicely and the importance of fathers. Parents need caution and media wisdom, however, for the elements of magic, some rude humor and brief mild language. Also, the movie’s references to faith are too vague. Advice from MOVIEGUIDE® could have fixed those problems.

(Pa, BBB, O, C, L, V, M) Light mixed pagan worldview with very strong moral elements but title character uses magic to help children understand the moral lessons and to make sure they have the opportunity to do so, having “faith” is extolled but it does not explicitly or overtly point to God, plus some redemptive moments of forgiveness; someone says there will be “h” to pay if something happens, “Blast you all” is said, no profanities, and some comical scatological references to cow manure and passing gas; some comic violence such as woman gets children to stop fighting by magically having them fight themselves and smash china (then magically fixing the china later), children chase pigs around the fields and trees, gambling house sends two burly women to force man to pay his gambling debt, massive wind blows things and people around, and girl has to defuse bomb that pilot drops on farm; no sex; no nudity; no alcohol; no smoking; and, lying, forgery and implied gambling by villain, plus child talks back to father at one point but things turn out all right between them.

NANNY MCPHEE RETURNS is much more entertaining and more heartwarming than the first move, which was released in 2005. It also extols some wonderful values. The question is, is that enough to overcome the use of magic in the story by the title character and the strange lack of any overt positive references to God?

The movie is set in the rural countryside in England, in a stylized version of the World War II era of the 1940s. In the first act, Nanny McPhee appears at the door of a harried young mother, Isabel Green, who is trying to run the family far, while her husband is away at war. Isabel’s three children, Norman, Megsie and Vincent, are fighting a war of their own against two spoiled city cousins, Cyril and Celia, who have just moved in after their divorcing parents sent them to the farm for protection.

Meanwhile, Isabel’s shifty brother-in-law, Phil, is pressuring her to sell the farm so that he can pay off some gambling debts. And, Isabel’s part-time employer in the local village, Mrs. Docherty, is starting to behave oddly.

Nanny McPhee gives the children five lessons, while using her magical walking stick to enforce her will, including stopping them from misbehaving and stopping them from accomplishing a task too easily. Bad news from the War Department, however, makes everything worse, convincing Isabel that perhaps she should sell the farm. Norman and Cyril must hitch a ride on Nanny McPhee’s magical motorcycle and sidecar to ask for the help of Cyril’s father, a stuffy soldier who runs the War Dept. Will they get back in time?

NANNY MCPHEE RETURNS is delightful, charming, funny, and winsome, more so than the first movie. After a slow start in the very beginning, which includes some jokes about mud and cow manure, the story takes off and the characters become endearing.

Much of that is due to the children actors as well as the adult ones. Nanny McPhee’s character is a little off-putting because of her warts and other ugly features, which slowly disappear when the children start learning their lessons and behaving. But, Maggie Gyllenhaal is totally believable and captivating from the start as the harried mother. And, Rhys Ivans is very funny and appropriately shifty as the ne’er-do-well brother-in-law. There are also some very funny animal shenanigans, including a group of cute piglets who Nanny McPhee magically makes to perform synchronized swimming in the farm’s pond and a cute baby elephant who magically shows up once in a while.

Besides being entertaining, NANNY MCPHEE RETURNS teaches some positive values. For instance, Nanny McPhee teaches the children five lessons: Stop fighting, share nicely, help one another, be brave, and have faith (more about that last one later). One of the most poignant messages in the movie, however, is how it shows the importance of fathers. Though Cyril’s father is a bit stuffy and cold and Cyril talks back to him at one point, they reconcile shortly thereafter, and Cyril’s father is clearly proud of his son for helping to fix the first of two major plot problems in the third act. There’s also an endearing scene at the end of the movie that wraps up the movie’s positive nod to fatherhood in an extremely heartwarming way.

Of course, the main problem with these Nanny McPhee movies is the use of magic. Though her facial blemishes disappear by the end of each movie, Nanny McPhee looks like the proverbial scary old witch. Nanny McPhee uses her magic to help her teach the children under her care the values that they need. As she tells the children and their parents in the beginning, “When you need me, but do not want me, then I must stay. “When you want me, but no longer need me, then I have to go.”

Thus, there’s a sense in this second movie in which the lessons and values, not the magic, take precedence. This is especially true in the movie’s tribute to the importance of motherhood, fatherhood and family, which comes together wonderfully well in the movie’s final scenes.

Even so, the use of supernatural fantasy magic like the kind in NANNY MCPHEE RETURNS takes away people’s hearts and minds from the supernatural power of the God who heals the sick, comforts the weak, transforms the heart, and afflicts the wicked. Thus, at one of several crucial points in NANNY MCPHEE RETURNS, Megsie calls out to Nanny McPhee for help instead of calling to God.

Also in NANNY MCPHEE RETURNS, the fifth lesson the magical nanny teaches is to “have faith.” In the movie, this seems to be a lesson to have faith in a general providence, not a faith in God’s Providence. The question arises, therefore, have faith in what?

All, or at least most, of the problems in the NANNY MCPHEE movies could be fixed if the children and/or parents looked to God sometimes, especially if the movies are going to mention the word “faith.” It also would help if the Nanny McPhee character were seen as some kind of benevolent supernatural messenger sent by God. These changes don’t have to be overbearing or preachy. In fact, all they might have to do in NANNY MCPHEE RETURNS is have Megsie call out to God to send Nanny McPhee to help her. Then, when faith is mentioned at the end, someone could mention something about putting our trust in God, or, better yet, in Jesus Christ, the only-begotten Son of God.

All that said, NANNY MCPHEE RETURNS provides a great opportunity for Christians to discuss the Christian faith and what it means with their children, grandchildren, relatives, friends, and neighbors. And, the other values and lessons taught in the movie present a great opportunity to ask their children, grandchildren, relatives, friends, and neighbors, “If Jesus Christ did indeed live a sinless life, die for our sins and rose from the dead, how, then, should we live?” All the answers to that question can be found in God’s Word Written, the Bible, which is totally accurate in all that it teaches.

So, for the good things in it, NANNY MCPHEE RETURNS is commendable. For the bad things in it, it requires serious caution, media wisdom and true faith. Please, always consult our CONTENT section above for more details.