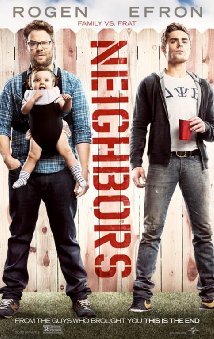 In NEIGHBORS, a thirtysomething couple with a lovely newborn baby find the peace and joy of their comfortable suburban home shattered by the arrival of a loud, heavy partying college fraternity next door. All-out warfare breaks out between the couple and the fraternity. Both sides make a number of subtle and not so subtle attacks on each other. Multiple acts of vandalism occur as the stakes keep getting raised.

NEIGHBORS is well made from a technical standpoint and offers some genuinely funny scenes. However, it’s badly compromised by its almost constant use of alcohol, drugs, toilet humor, nudity, sex, and foul language as plot devices. Warn your friends since most of the more questionable scenes, such as graphic simulated sex, extreme toilet humor, and obscene language, won’t be advertised. The movie’s worldview is strongly pagan and hedonistic. None of the characters manage to morally rise above any of the other characters. So, there is no positive or redeeming message. The movie also has too many endings. Ultimately, NEIGHBORS is a self-indulgent, tasteless, unimaginative excuse for making a buck at the box office.

(PaPaPa, Ho, LLL, VV, SSS, NNN, AAA, DD, MMM) Very strong pagan worldview, plus a lesbian homosexual reference when main female character kisses another woman; at least 103 obscenities uttered by just about everyone in the movie, three profanities, simulated urination shown by the main characters while they talk to each other; strong comic violence such as airbag sends man on couch flying and two characters engage in fist fighting and hit each other with objects, including plastic male organs; very strong sexual content includes scene where partially dressed couple is having sex as their baby watches, several occasions of simulated intercourse, scene where one fraternity member stands in front of an audience as his male organ rises from under his clothes, sex toys are shown and used as props on various occasions, main female character is shown kissing another woman, and derelicts and prostitutes appear in cameo parts; partial nudity including male side and buttocks, upper female nudity showing breasts with a burst of breast milk, in a hazing scene students are shown naked on their knees following each other in a circle, and an exhibition displaying plastic male organs of varying sizes; extreme alcohol use and drunkenness; marijuana smoking takes place on various occasions, including by characters at their place of business; and, revenge and vandalism escalates to ridiculous heights, for comic effect.

NEIGHBORS is an extremely crude comedy about a fight between a married couple and the fraternity house next door.

Kelly and Mac Radner (Rose Byrne and Seth Rogen) are a thirtysomething couple enjoying a leisurely happy life in suburbia with their beautiful newborn baby. The house next door is vacant. At first, it appears that some very nice folks just like them are getting ready to close on the property and move next door, but surprise of all surprises, it isn’t going to be them after all. Of all conceivable nightmares, the vacant house next door is about to become a fraternity house where loud partying, drinking, sex, smoking pot, and general all around mayhem will be the order of the day. . . and night.

At first, the couple decides to pursue a strategy of neighborly friendliness by strolling over to meet their new neighbors and casually slip in a reasonable request to be good neighbors and keep the noise down. To reinforce their good intentions and in a spirit of rapprochement they present Teddy Sanders, the fraternity’s president played by Zac Effron, a couple of “peace joints” and hopefully get off to a good start. One good turn deserves another, so Teddy invites Mac and Kelly to come party with the rest of the fraternity, who don’t seem to have much studying to do, ever, nor do the frat sisters who look like pinup girls but seem to be perfectly happy just acting sexy in the unending party atmosphere. Mac and Kelly take him up on the offer and happily join the party. In fact, they eventually wind up in pretty much the same drunken stupor as everyone else.

Regrettably, the agreed-upon accommodation reached at the party later hits a brick wall. Mac and Kelly realize they can party with Teddy all they want, but getting them to lower the music or cut back on the party hours was really never an option. This is especially true in light of Teddy’s master plan, which is to end the semester with the biggest bash the fraternity has ever thrown and thus be able to prominently place his portrait on the fraternity’s wall of party fame.

Finally fed up with the constant noise, Mac and Kelly decide to call the cops, but the complaint backfires when Teddy and the rest of the fraternity learn that it was them that initiated the call after promising Teddy that they wouldn’t do such a thing unless they talked it over with him first.

From this point, all out warfare breaks out between the two houses with a number of subtle and not so subtle attacks on each other. The mayhem includes various acts of vandalism, a scene where the couple is watched having intercourse from outside their window by the entire fraternity, and another where a sea of party litter is left all over the couple’s front yard and with a big sign labeling the couple as being “too old” and where their baby is found chewing on a condom.

The tide of battle goes back and forth with some occasional funny slapstick that may elicit a laugh here and there until one side finally prevails. However, by now, any good attempts at a straightforward comedy have already been fatally compromised by the heavy drinking, pot smoking, foul language, toilet humor, and overall debauchery that informs the unrealistic plot. To make matters worse, and perhaps as an attempt to redeem itself, the makers give viewers a final scene followed by another final scene, followed by a final, final scene. . . enough already, it’s just too late to rescue this loser.

NEIGHBORS is the latest rendition from director Nicholas Stoller, (FORGETTING SARAH MARSHELL, GET HIM TO THE GREEK). Although certainly executed in a thoroughly professional level, one just has to wonder whether this was a labor of love for Stoller, or just another job for a paycheck. Seth Rogen is likable as Mac Radner, and Rose Byrne as his wife Kelly manages to balance her vulnerability as a mother versus her natural strength and resourcefulness in the face of adversity with aplomb. Zac Effron has a difficult job as the sexy, single-minded party animal who’ll stop at nothing to achieve his misplaced, sophomoric goals. The rest of the supporting cast is adequate in their respective roles, including Dave Franco as Pete, Teddy’s right-hand man and pseudo pop psychology advisor.

Sadly, their combined efforts suffer under the irreparable shortcomings of the awful script, which from the first crude, hardly funny scene to the last crude, hardly funny scene misses one opportunity after another to make people laugh a lot more and be offended a lot less or to insert a more positive, uplifting message. Instead, the filmmakers resort to the basest instincts in pursuit of a comedy hit for its college age targeted audience. Of course, the biggest loser of all may turn out to be that portion of the audience that unsuspectingly winds up sitting through this self-indulgent, tasteless, unimaginative excuse for making a buck at the box office.