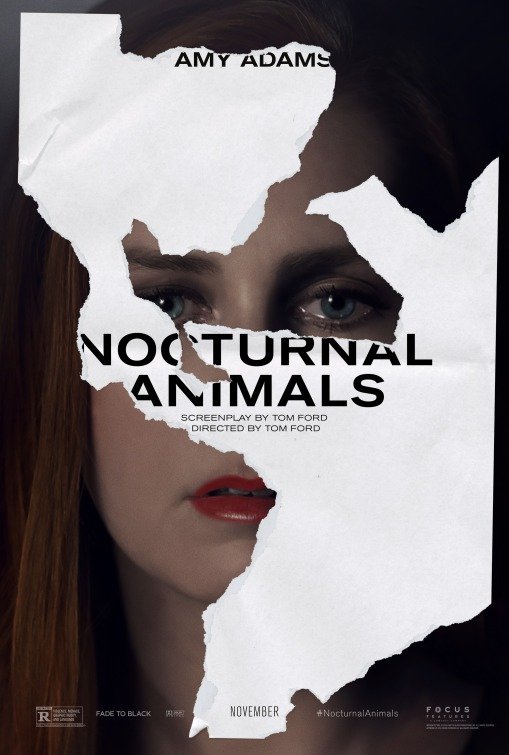 NOCTURNAL ANIMALS is an edgy movie within a movie. After a lurid nude exhibition at her art gallery, the owner comes home to find her first husband sent his first novel for her to read. As her unfaithful second husband goes away on a business trip to New York, she reads the novel. In it, a man’s wife and daughter are kidnapped, raped and murdered in West Texas. Brief flashbacks show how the gallery owner began her romance with her first husband and cheated on him with her second. Meanwhile, a detective helps the man in the novel bring his family’s killers to justice.

NOCTURNAL ANIMALS is an abhorrent, unsatisfying piece of garbage. Filled with foul language, it’s rather pretentious, self-indulgent and too obscene. Apparently, the novel is the weak first husband’s psychological revenge against the wife who treated him so badly. NOCTURNAL ANIMALS also contains a politically correct leftist attack on Republicans and conservatives in one scene and extreme nudity in another scene. Its plot adds up to an apparent, though subtle, leftist attack on American society and the American Dream.

(RoRoRo, PCPC, APAP, AcapAcap, HoHo, LLL, VVV, SS, NNN, A, D, MM) Very strong Romantic worldview with strong politically correct elements that seems to attack American society, including not only its rich upper classes running the society from the two coasts, but also the poor people out in the hinterlands, who have (apparently) little hope of achieving the American Dream and so strike out viciously because they’re ignorant (the hero seems to be the struggling poor artist who, however, is too weak to make a real difference but knows it), plus a strong politically correct attack on allegedly “racist, sexist, homophobic” Republicans and conservatives and some strong pro-homosexual references; at least 102 obscenities (including many “f” words), 13 strong profanities, 10 light profanities, and an obscene gesture; some very strong, strong, intense violence includes flashback shows brief shot of a teenage girl being raped by a young man, man hit with a poker and later has blood around his eye, young men fight and scuffle with man and his wife and teenage daughter, an implied abortion, two female bodies are found nude and murdered and later police detective reveals to husband the females were raped, two cars run a family’s car off the road and physically harass the family before kidnapping the mother and teenage daughter; brief depicted rape scene of teenage girl, implied rape, several rude sexual comments, women dance nude, woman cheats on first husband with man who becomes her second husband, second husband cheats on her, a couple references to homosexuality, and woman’s college-age daughter is lying nude in bed with another man; total female nudity as two videos show some full-length views of two extremely obese women dancing, shots of rear female nudity, and four nude obese women lie motionless on white slab in some kind of obscene art gallery exhibit for people at a gallery event; alcohol use; smoking but no drugs; and, woman doesn’t tell her first husband that she’s aborted his baby, but he finds out after she’s just left the abortion facility, other lying and deceit, and men are depicted as either too weak or too immoral/flawed/evil if they are strong or more masculine.

NOCTURNAL ANIMALS is an edgy movie within a movie about an art gallery owner who reads a novel by her estranged first husband about a man whose wife and daughter are kidnapped, raped and murdered in West Texas. Filled with gratuitous foul language, NOCTURNAL ANIMALS opens with a bizarre, obnoxious art gallery presentation and ends with a whimper. What happens in between is a total waste of time and effort, a lurid tale of violence and revenge.

The movie opens with disgusting shots of two videos featuring two extremely obese, nude middle-aged women waving flags, pom poms and sparklers as they dance in slow motion with no sound. Apparently, the two videos are being projected to a group of art lovers at a gallery owned by a female curator named Susan Morrow. As the art lovers wander around the room eating hors d’ouvres and drinking champagne, four nude obese women lie motionless on white slabs around the room.

Cut to Susan arriving at her fancy house, where she gives the servants the weekend off, saying she and her husband, Hutton, may go to the beach. Shortly thereafter, Hutton arrives, only to tell Susan he has to fly to New York City that weekend to complete a major business deal that’s essential to their future financial health. Hutton says he couldn’t attend her art gallery’s event earlier that evening, even though it was only 15 minutes away from his office. Though disappointed, Susan forgives him. She informs Hutton that Edward, her estranged first husband with whom she hasn’t talked to in 19 years, sent her a copy of his first novel, which he’s entitled “Nocturnal Animals” and dedicated to her.

Susan and Hutton attend a dinner party at their friends. Susan talks to the married couple hosting the dinner.

Susan admits privately to the man she’s not satisfied with the art she’s been presenting at her gallery, including the exhibit featuring the nude obese woman. The man says it was a perfect representation of America’s junk culture. Susan agrees it was total junk.

Next, the man’s wife privately inquires if Susan is still having trouble sleeping. Susan says she’s always had trouble sleeping. The woman then inquires about Susan’s marriage. Susan says she and Hutton are fine, though it’s become clear that the two are anything but, despite Susan’s love for her second husband. The woman briefly mentions something Susan apparently already knows: that the woman’s husband is really homosexual. The woman says she’s perfectly fine with that, because she knows that since her husband is homosexual, he can never really love another woman. Besides, she says, she and her husband are very close friends, who have a great life together, and that’s enough for her.

That weekend, with Hutton away in New York, Susan starts to read her first husband’s novel. The novel turns out to be about a man, his wife and their teenage daughter driving at night in East Texas to have a vacation at a lake house or cabin. At this point, the movie starts showing scenes from that novel. Susan imagines that the man in these scenes looks like an older version of her first husband, Edward. The family in the novel is run off the road by three young good old boys in two other cars. The men threaten the family, then kidnap the wife and daughter while isolating the husband from them. Eventually, the man’s wife and daughter are found raped and murdered, and the husband has to help a local detective track down the killers.

Interspersed with these scenes from the novel are scenes of Susan making a call to her second husband in New York and finding out through an offhand comment by an elevator attendant that her husband has another woman with him. There are also scenes recalling the beginning of Susan’s romance with her first husband and the end of their marriage. It becomes clear that the first husband’s novel might represent a reflection of the leftover baggage regarding this failed first marriage. It may also be his revenge against the wife who treated him so poorly.

NOCTURNAL ANIMALS has too many flashbacks and too many cutaways back and forth between the scenes from the novel and the scenes from Susan’s present life. The novel’s story is more interesting, but it contains lots of strong foul language and depressing scenes of violence and death. There’s even a brief shot of the teenage daughter being raped.

In addition, NOCTURNAL ANIMALS has a boring open-ended ending that resolves nothing. It’s a pretentious, arty, self-indulgent ending that will only please mindless, condescending humanist or pagan critics and moviegoers who eat this kind of junk up. Apparently, the end scene, though open-ended, is meant to reveal some type of emotional revenge that Edward is getting on Susan. The problem is, Edward’s character is just a prop, a story device whose character only shows up twice in the movie, leaving viewers to insert almost any kind of meaning they want into the ending and into his character, including the reason he dedicated his novel to his wife.

NOCTURNAL ANIMALS is an abhorrent, unsatisfying, depressing work. Media-wise viewers will have a hard time deciding whether it’s the graphic, obscene parts or the pretentious filmmaking that’s more upsetting.

Almost as if on cure, the movie also contains a politically correct scene praising “open-minded” liberals who support homosexual behavior/lifestyles and condemning “intolerant” Republicans and conservatives who don’t. The movie also seems to be an implied Romantic, politically correct critique of American society, where its rich people run the society from the two coasts, while the poor people in the hinterlands have little hope of achieving the American Dream and so turn to violence and bullying. As such, the hero seems to be the abused first husband, the sensitive artist who, however, is too weak to save his marriage or get remarried. There’s also a scene at an abortion facility, where Susan expresses regrets to Hutton, with whom she’s having an adulterous affair, about having just aborted Edward’s baby without his knowledge. The movie cuts to Susan and Hutton outside the abortion facility discussing the issue in the car when, suddenly, Edward appears, standing in the rain and glaring angrily at them. Thus, despite their attempt to hide the truth from Edward, he has found out. This scene may be interpreted as some kind of pro-life, anti-abortion message, but, given the other scene mentioned above, that is probably doubtful. After all, the scene actually ends with Susan expressing regret for hiding the abortion from her husband. So, the movie actually seems to be criticizing THAT decision, not really Susan’s decision to have the abortion in the first place.