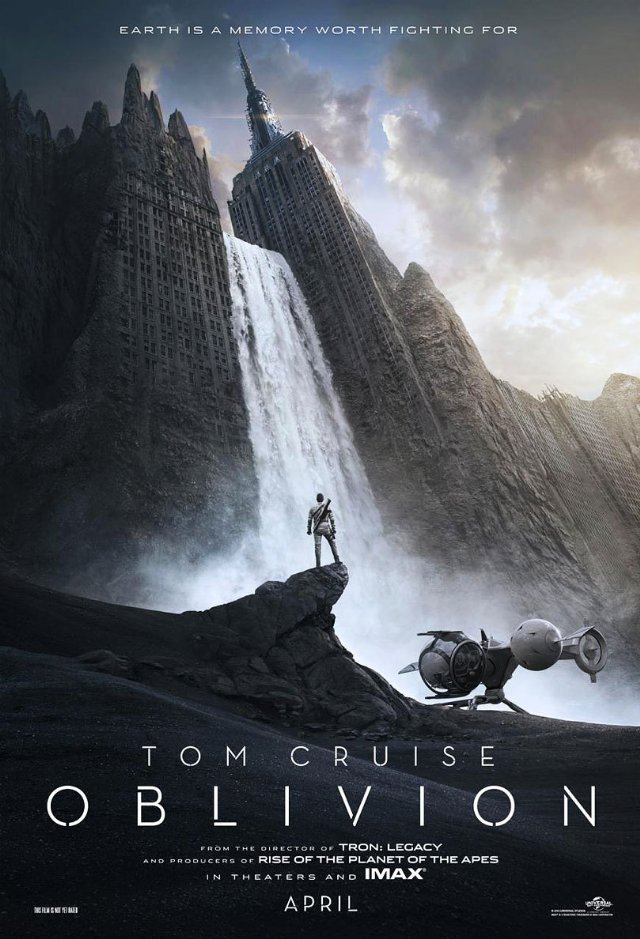 OBLIVION stars Tom Cruise as Jack Harper, a war veteran who works as a technician to protect humankind from aliens. Jack Harper supports the drones that roam Earth protecting humans and getting energy. Even though the humans won the war against the aliens, the Earth was completely demolished. With his female teammate’s support, Jack goes down to Earth every day to repair drones needing fixing. Jack starts to have dreams and memories of a woman. When a ship goes down, Jack comes to the rescue and finds the woman from his dreams. Eventually, Jack realizes he’s been protecting the wrong people.

OBLIVION is an interesting science fiction movie, but seems to have a convoluted open-ended storyline. The overall quality is excellent, with exciting action scenes, good acting, and beautiful production design. Despite the convoluted storyline, Jack Harper chooses to sacrifice for the greater good. His lost memory means he’s been sleeping with another woman not his wife. However, he eventually does the right thing and saves lives. That said, OBLIVION has some crude dialogue and sensual content. So, extreme caution is required.

(B, C, E, LL, VV, S, NN, A, D, M) Moral worldview, with slightly redemptive content, including elements of sacrifice and a “Hail Mary” in the dialogue, plus some light environmentalist content, but not overbearing, but with pagan, scientology and libertarian elements, as well as anti-god with a small “g”; 14 obscenities (including one “f” word), three GDs, one light OMG, plus some crude comments and vomiting; action violence, drone shoots at people, main character fights others in defense and almost kills, scary aliens attack; implied fornication, kissing, hero and woman shower near one another, and it’s shown that hero and woman wake up together, including a plot where hero has lost his memory of his wife, and the “bad guys” want to keep it that way; salacious rear female nudity where some of the breast is slightly visible in one scene, and some upper male nudity; light drinking; no man smokes cigar once but no drug content; and, lying and deception, but hero finds out the truth.

OBLIVION stars Tom Cruise as a futuristic war veteran who protects humankind from aliens. OBLIVION is a Tom Cruise movie with a lot of action that will also get viewers thinking. However, there’s some pagan elements and lewd content, so extreme caution is required.

Jack Harper is the technician for the drones that monitor the Earth for aliens and help the remaining humans obtain energy. Even though the humans won the war against the aliens, the Earth was completely demolished. Each day Jack goes down to Earth to repair any drones needing fixing. Because of the unknown dangers, Jack’s safety is monitored by his teammate and love interest, Victoria.

Being the only one to go down to Earth every day, Jack still feels connected to the planet. He builds his own home there that no one else can see. Victoria, however, is afraid of Earth and the contamination that anything from Earth can bring.

One day, Jack finds a place on Earth that triggers memories of a woman in the same location coming towards him. This memory haunts Jack. He starts to dream about the woman and somehow feels a connection to her.

One day Jack is out to repair a drone and finds a ship that’s crashed or been destroyed. There are a few bodies in sleep capsules around the ship. One of them happens to be the woman from Jack’s dreams. He decides to take her home. When he opens the capsule, the woman wakes and says Jack’s name. Both he and Victoria are completely confused by this woman, but Jack senses a connection, as if he knew her before.

When the woman recovers, she’s finally able to talk to them. She says her name is Julia, and she was on a mission when her ship went down. She feels she must get back some information from her ship and convinces Jack to take her back. During this time, she tells Jack they were married. Her revelation changes things completely, and all of Jack’s memories come flooding back to him. When Jack regains his memories, he realizes he must save mankind from the exact people he thought were on his side.

OBLIVION is an interesting science fiction thriller, but seems to have a convoluted, open-ended storyline. The overall quality is excellent, with exciting action scenes and some good acting and although there are some static moments. The aesthetic and design of the props is beautiful.

Despite the convoluted storyline, the hero chooses to sacrifice himself for the greater good. Also, although his lost memory results in him sleeping with another woman not his wife, the hero eventually does the right thing and saves lives.