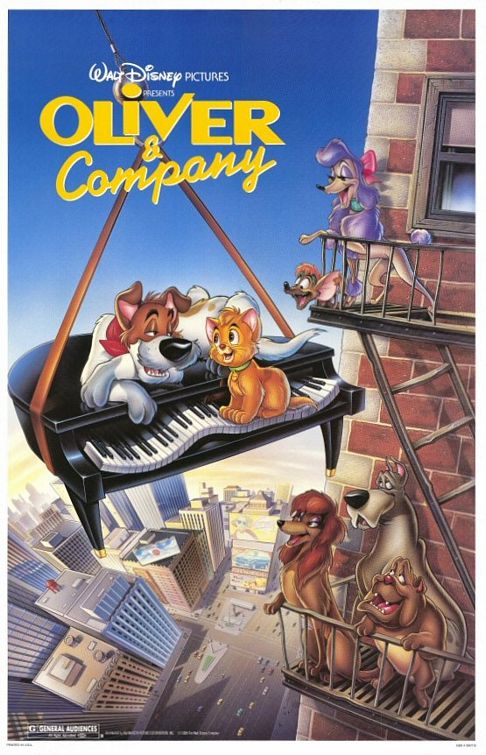 OLIVER & COMPANY is a welcome re-release of a 1988 Walt Disney feature-length animated film. This classic Charles Dickens's story features a colorful cast of animal and human characters. Though containing some action violence such as falls, spills and chases, it is a family friendly movie.

OLIVER & COMPANY is a welcome re-release of a 1988 Walt Disney feature-length animated movie which retains the look and feel of the hand drawn animated Disney classics of the past. Oliver is a furry little kitten who doesn’t get adopted by a family. Instead, he is left out in the cold and rain. Facing certain doom and danger, he teams up with a dog named Dodger who steals hot dogs for his other canine friends and master Fagin. Fagin and his band of thieves live on an unseaworthy vessel on the docks of New York City. Fagin has three days to pay back a large sum of money from his boss Sykes. Try as they might, they can’t make any money, and Oliver gets picked up by a little rich girl named Jenny. Oliver is rescued against-his-will, but Jenny stops Sykes from bringing his wrath down upon Fagin.

Parents can feel confident taking their children to this movie. Many parents complain about today’s Disney movies in that they contain subtle New Age influences (POCAHONTAS) or sexual suggestiveness. OLIVER AND COMPANY has none of this. It does have, however, some action violence such as spill and thrills, and Dodger and Fagin are pick-pockets. Also, Sykes in his big car and snarling Doberman companions may scare some little children. Nevertheless, it is a classic, family friendly movie.

Rent or Buy OLIVER AND COMPANY: