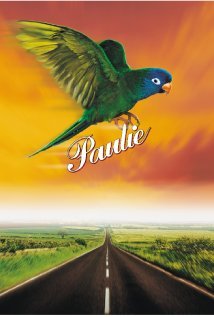 PAULIE is a gritty movie. A Russian professor immigrant named Misha takes a job as a janitor at a laboratory which is trying to find a communications link between people and animals. In the basement of the laboratory, he discovers a parrot named Paulie who can talk, not just repeat words. Paulie tells Misha that he belonged to a young girl named Marie. Paulie also tells Misha about how he learned to talk and how he made his way to Los Angeles. Misha takes pity on Paulie and decides to spring him from his laboratory prison.

Paulie learns some good lessons in this coming of age parrot story. When caught stealing, he says that nobody ever taught him that stealing was wrong, but he learns that stealing is wrong. He also learns to be polite and to love. Misha learns he must speak up at the right time, while Paulie learns that he must not talk too much. Greed and evil are exposed, and crime is rebuked. Only two things detract from this morality tale: one blatant profanity; and, the stark realism. Therefore, PAULIE is not a movie for little children. It is a movie with a big heart and deserves better than being depreciated by profanity.

With MOUSETRAP, DreamWorks made a film noir for children. PAULIE is lighter but still presents a realistic, gritty ambiance. PAULIE starts out with a Russian immigrant named Misha (Tony Shalhoub) coming to work at a laboratory which is trying to find a way that people can communicate with animals. Misha came to America to be a “big shoot” (Note: Misha doesn’t like to use the past tense now that he is in America). Although he was a professor of literature in Russia, he has been reduced to working as a janitor in America.

In the basement of the laboratory, Misha finds a parrot whom everyone says is dangerous. As he is cleaning up, he hears somebody singing wistful tunes about love and life and discovers that this parrot can actually talk, not just repeat what someone says … but ….TALK! After some wheedling, Misha gets the parrot, whose name is Paulie, to tell his story.

Paulie tells Misha that he was given to a little girl named Marie (Hallie Kate Eisenberg), who had severe learning disabilities. Marie’s father was exasperated with her, and he fought with his wife, Marie’s mother, continually about how to care for Marie. Paulie learns how to speak by observing everyone’s efforts to teach Marie, and, in turn, Paulie ends up teaching Marie. Marie’s grumpy father, however, does not like Paulie, and so, after several incidents involving Paulie and the cat, he takes Paulie away.

Paulie goes through various owners, including a pawn shop owner who curses profanely. Ivy, played by Gena Rowlands, rescues Paulie from the pawn shop and teaches him some manners. He convinces her to help him look for Marie, who has moved from New York to Los Angeles, and so, they head off across the country in Ivy’s RV. Along the way, Ivy looses her eyesight, and Paulie becomes her seeing eye bird. Eventually, Ivy dies, and Paulie has to learn to fly to get to Los Angeles even though he is afraid of heights.

In LA, Paulie falls for a pretty Mexican parrot and ends up working for Ignacio, played by Cheech Marin, an illegal immigrant who has turns a taco stand into a dance parlor at night. At the Taco stand, a small time crook named Benny, played by Jay Mohr, recognizes Paulie from the New York pawn shop and steals him from Ignacio after calling the police to blow the whistle on the evening’s festivities. Benny teaches Paulie to steal, but Paulie gets caught and sent to the dreaded laboratory.

Back to the present, Misha takes pity on Paulie and decides to spring him from his prison.

Only two things detract from all this goodness. One, a blatant exclamation of G** D*** by Buddy Hacket, who plays the pawnshop owner Marty (probably an attempt to get a PG rating). Two, is some of the stark realism which skews the movie a little older than the young audience who attended the screening. Thus, whereas my 12-year-old said he loved it (as did my 9-year-old) and saw all the moral virtues, a little 5-year-old said she hated it when leaving the theater. Thus, Paulie is a movie for 8-year-olds and up. Without the G** D***, we would have given it a +3. It is a movie with a big heart and deserves better than being depreciated by senseless profanity.