"Friendship Means Putting Others Above Yourself" 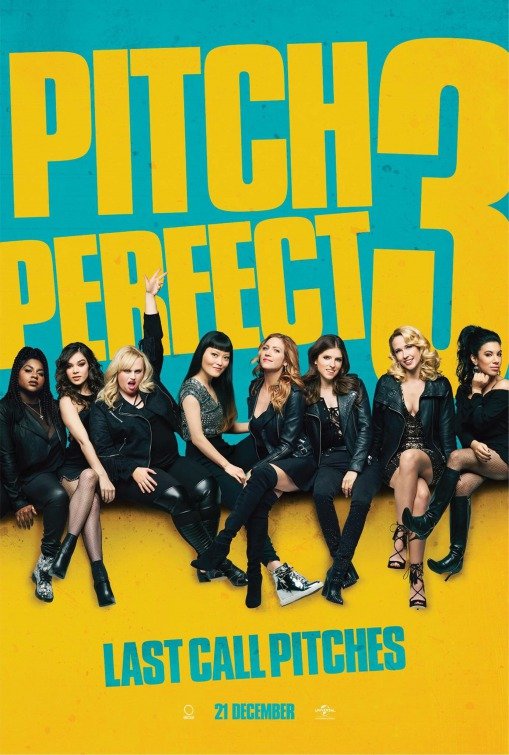 PITCH PERFECT 3 is an often funny, sometimes crude movie that concludes the trilogy of the Barden Bella a cappella singing group. Now graduated from college, the Bellas are living their separate lives in the real world, like regular adults. When they get the chance to perform overseas on a tour for the troops, they reunite for one last hurrah. They discover they could get signed onto a record label at the end of the tour. However, they’ll be competing against other bands playing instruments, so the stakes are raised.

PITCH PERFECT 3 offers lots of goofy fun. It’s much improved from the previous movie, which had some major holes. This sequel embraces the ridiculousness a bit more and highlights the quirkier characters better. Happily, it has some positive messages about friendship and putting others before yourself. It also contains some nice patriotic sentiments about American troops serving overseas. Finally, there’s also a light theme about the importance a father has in a daughter’s life. Unhappily, however, PITCH PERFECT 3 has some lewd jokes, perversion and foul language; so, extreme caution is advised.

Dominant Worldview and Other Worldview Content/Elements:
Strong moral worldview with some light redemptive elements promotes friendship, selflessness, putting others above yourself, and the importance of fathers; strong pro-troop sentiments; one character who never speaks talks normally at the very end to everyone’s shock and it’s said that “Satan has finally left her body,” plus one character is a lesbian homosexual.
Foul Language:
Seven obscenities (including a few “s” words), no strong profanities, nine light profanities (OMG), and an obscene gesture.
Violence:
An action sequence includes men getting punched, arms broken (probably), and an explosion.
Sex:
Many sexual jokes, including references to female anatomy, to getting to “Second Base,” to co-habitation, to one of the characters lesbianism, a passionate kiss, and some sensual singing and dancing.
Nudity:
No actual nudity, but there are cleavage revealing outfits, and one rock star character has a see through top that shows her bra underneath.
Alcohol Use:
Light drinking.
Smoking and/or Drug Use and Abuse:
No smoking or drug use, but a man is an implied drug trafficker.
Miscellaneous Immorality:
No other objectionable content.

PITCH PERFECT 3 is an often funny, though sometimes crude musical comedy that concludes the trilogy of the Barden Bella college a cappella singing group.

Now graduated from college, the Bellas are living their separate awesome lives in the real world, like regular adults. However, life isn’t so awesome. Each one of them hates their jobs and misses their old singing days, including Becca (Anna Kendrick) who just quit her job as a music producer for a really stuck-up rapper.

When the whole gang reunites to see the new Barden Bellas perform, they all commiserate at how boring their lives are. Aubrey gets an idea, however, for her to convince her father, a military commander, to let them perform on a USO tour overseas with some other big bands. Additionally, superstar DJ Khaled is on the tour and at the end will choose one of the bands performing to join his record label. Could the Bellas be the one?

Arriving in Spain, the Bellas are approached by two soldiers who will serve as their escorts and security, one of whom attracts Chloe’s romantic attention. The Bellas realize their competition includes some talented bands that play instruments, which will prove to be more difficult since they’re used to performing against other a cappella groups. In a subplot, Patricia “Fat Amy” is tracked down by her criminal drug trafficking father who tries to woo Patricia into coming back to him, but he has nefarious motives.

PITCH PERFECT 3 offers lots of goofy fun. In fact, it’s much improved from the previous movie, which had some major holes. This sequel embraces the ridiculousness a bit more, and highlights a few of the quirkier characters better. The sub-plot regarding “Fat Amy’s” criminal father brings some action into the mix and gives her some hilarious scenes. The musical moments are catchy, and the ending resolves the story nicely.

The movie has some positive messages about friendship and putting others above yourself. It also has some nice patriotic sentiments about American troops serving overseas. There’s also a theme about the importance a father has in a daughter’s life, even though the two examples given during the movie show fathers failing in this regard. Unhappily, there are many sexual jokes and innuendoes, perversion and some foul language that mar the positive content. So, MOVIEGUIDE® advises strong or extreme caution for PITCH PERFECT 3, especially for teenagers.