PRELUDE TO A KISS 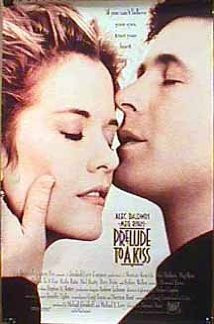 In PRELUDE TO A KISS, Peter Hoskins (Alec Baldwin) meets Rita Boyle (Meg Ryan) at a party. They fall in love and marry. Meanwhile, an old man waiting to die is exhorted to “get up and join the living.” Following this counsel, he wanders into Peter and Rita’s wedding reception where he says he just wants to wish them well and kiss the bride. Rita obliges; however, something strange happens during the kiss. During the honeymoon, Peter notices that Rita is not the same person he married. The sudden change concerns him, and he storms out to the tavern where Rita used to work where the old man is ordering Rita’s favorite drink. Peter discovers that Rita and the man have switched bodies. When he brings the old man home, Rita is gone, so Peter starts a desperate search to find Rita.