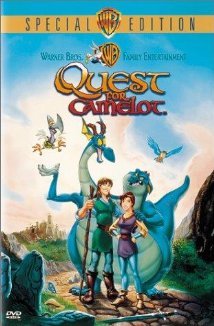 QUEST FOR CAMELOT is a new Warner Bros. animated movie featuring song and dance numbers, lots of action and a little romance. It is an admirable if not completely original work about a young woman who saves Camelot. This movie has all the signature elements that define recent animated features such as the goofy sidekick, the young hero, the young heroine, feats of skill, and danger, plus a little feminism and magic.

For many, many years, Warner Bros. has been a leader in short animation with their crazy Looney Tune characters. Recently, they featured all the Warner Bros. characters in the hybrid live action and feature animation SPACE JAM. Now, Warner Bros. joins 20th Century Fox in trying once more to challenge Disney feature animation with QUEST FOR CAMELOT, an animated movie featuring song and dance numbers, lots of action and a little romance. This animated movie is an admirable if not completely original work with all the signature elements that define recent animated features such as the goofy sidekick, the young hero, the young heroine, feats of skill, and danger as well as a little feminism and magic.

QUEST FOR CAMELOT is another story revolving around King Arthur and the knights of the Round Table. Here, the heroine is a teenage girl named Kayley (Jessalyn Gilsig) who dreams of one day joining the male knights around the Round Table in the place of her late father, Sir Lionel (Gabriel Byrne). The safety of Camelot is assured as long as Arthur is on the throne and his sword, Excalibur, is in his hand. One day, a knight named Ruber (Gary Oldman) declares his desire to gain the throne and sends his vicious ally, the Griffin (Bronson Pinchot), to steal Excalibur. Though successful in stealing the famed sword, Griffin accidentally drops the sword in the strange Enchanted Forest.

Ruber also kidnaps Kayley’s mother Lady Julianna (Jane Seymour) and attempts to kidnap Kayley, but Kayley escapes on horseback to the Enchanted Forest to try and recover Excalibur. Ruber applies some magic potion (labeled “Acme”) to some unwitting townspeople and even a chicken, turning them into mechanical warriors with weapons for arms and legs. Ruber’s new goal is to find Excalibur and lay siege on Camelot, taking the throne from Arthur. In the Enchanted Forest, Kayley meets a young man named Garrett. Though blind, Garrett knows every rock and tree in this land of strange dangers, including dragons, even a benevolent comical two-headed dragon, Devon & Cornwall (Eric Idle & Don Rickles). With the blessing of Merlin the magician, (who surprisingly doesn’t practice any magic), Kayley and Garrett ultimately use their talents to face the ruthless Ruber, rescue the Lady Juliana and save Camelot.

Solidly though conventionally told, this movie would earn a solid B if MOVIEGUIDE awarded letter grades. The animation is good, and sometimes excellent, but not spectacular. Voice talent is solid all away around. Songs are average but sweet, and the song and dance segments rate a good copy to the best of Disney, including a interlude where the dragons impersonate everyone from Picasso to Sonny & Cher and Elvis (similar to the Robin Williams Genie in ALADDIN). The overarching themes of the story are preservation of truth, freedom and peace. Of course, the romance between Garrett and Kayley is very chaste. The Lady Juliana sings a whole song entitled “I Pray” where she is appealing to God for restoration of peace in her family and in Camelot. Though present, the role of magic in the movie is diminished. Someone asks Merlin if there is any magic he can do, and he replies, “No, we must rely on the courage of our people.”

QUEST FOR CAMELOT does have some moral errors and mild reasons for concern. Though there is no harm in Kayley’s can-do attitude and desire to succeed in helping Camelot, she tells her mother, “What is the glory in doing chores?” Thus, she demeans the importance of domestic work. Furthermore, she sings a song about how her deceased father inspires her and sings a line that “your spirit will guide me.” Finally, elements of socialism emerge when Arthur explains that not only does he endorse freedom for all people, but equal amounts of land for all the residents. Nevertheless, this movie doesn’t seem to have a loud agenda endorsing these feminist and socialist themes. They are quickly glossed over and greater themes are explored.

Rent or Buy QUEST FOR CAMELOT: