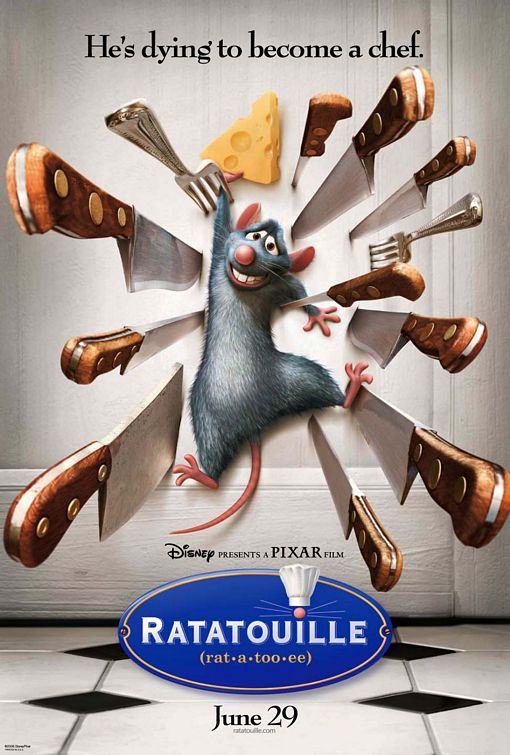 RATATOUILLE opens with Remy the rat narrating his story. Instead of the cuddly Mickey Mouse, he’s a rat that most people want to avoid. But, Remy has high aspirations. He has a finely tuned taste and smell palette, can read and wants to become a great chief like, Auguste Gusteau. A country rat, Remy finds himself separated from his father and brother in Paris. There, Gusteau’s famous restaurant has fallen on hard times. Remy teams up with the new garbage boy Linguini, who may be Gusteau’s heir, to take the culinary world of Paris by storm. Their only obstacles are the new ill-tempered head chef, the meanest food critic in town, and a female chef named Colette trying to make her way in a chauvinist world.

(BB, C, CapCapCap, L, V, AA, M) Strong moral worldview with light Christian elements including two references to faith, one saying a mother is in Heaven because she believes in Heaven and another talking about godliness, both vague, with very strong pro-capitalist content, but the major message is that a great artist can come from anywhere, not that everyone is a great artist but anyone can be a great artist and their abilities are not genetically or culturally or environmentally determined, so it’s more in line with the Christian view that gifts come from God and so more in line with the Declaration of Independence, and many moral points include admonitions against stealing, but sometimes the moral points are ignored by the dramatic action; one light obscenity and perhaps one light exclamatory profanity; lots of cartoon action violence including knives being thrown at rats, elderly lady shoots at rats with shotgun and almost destroys her house, rat plunges down into sewer, rat scampers under feet of people almost getting squished, etc., angry woman pins chef’s clothes to table with knives as she vents her anger, and chase scene with scary acrobatics and jumping; a kiss; no nudity; character plied with alcohol until he’s drunk; no smoking; and, lots of stealing but often rebuked, and character argues with his father but lightly rebuked.

RATATOUILLE is a wonderful, savory concoction from the incredible Pixar team. Long ago, the Pixar team decided they didn’t want to do sequels but explore new territory in each of their movies. RATATOUILLE is a delightful exploration of food, fame, France, and fantastic characters who at first seem very unpalatable but turn out to be deliciously entertaining.

The movie opens with Remy the rat narrating his story. He is not the cuddly Mickey Mouse of yesterday’s Walt Disney Company. Instead, he’s a rat that most people would want to avoid. But, Remy has high aspirations. He has a finely tuned taste and smell palette, has taught himself how to read and wants to become a great chief like his hero, Auguste Gusteau.

When the mistress of the farmhouse where Remy’s colony resides tries to blow them off the face of the earth with her shotgun, they all get carried away on the river, into the sewers to Paris of all places. When Remy wakes up after his harrowing escape, he is talking to Auguste who died recently. Remy recognizes that Auguste is a figment of his imagination, but his internal dialogue leads him straight to Gusteau’s famous restaurant.

Since Gusteau died, the restaurant has fallen on hard times. It is now run by the mean-tempered new chef, Skinner.

In an unlikely scenario, Remy teams up with the new garbage boy Linguini, who may be Gusteau’s heir, to take the culinary world of Paris, and Skinner, by surprise. The villains are set against Remy and Linguini, including Skinner, who tries to pry Linguini’s secrets out of him by getting him drunk, and the fiercesome food critic Anton Ego, who looks down on Gusteau’s motto that “Anybody can cook.”

As one might expect in Paris, this gourmet meal includes a touch of love, a lot of humor, some fantastic action, and some of the most delightful food scenes in the history of cinema. RATATOUILLE is a near great movie. It does have some issues, however. Linguini is plied with enough wine to get him drunk, the rats are not only difficult to embrace, but they also steal when told not to do so, and some of the cartoon violence skews toward older children and teenagers. However, there are many mentions of moral principles to counteract this, and the overall storyline is very pro capitalist, pro individual and supportive of the gifts that the individual has no matter what his background or genetic makeup. The movie also has a reference to godliness in that old non-biblical saw about cleanliness, and there is a reference to Heaven.

The real Christian theology comes in the fact that the movie makes it clear that anyone can be a chef, although not everyone can be a great chef. Thus, like the divine meritocracy instituted by the Declaration of Independence, the movie strongly suggests that all people are created equal by God, who grants everyone the right to pursue personal happiness while they pursue their individual service to God’s divine authority. Whether the humanist pundits who believe in biological and economic determinism pick up on the radical nature of this premise is anyone’s guess, but it is nice to see a movie taking the side of free enterprise and freedom to be who you want to be.

Will WHEN CALLS THE HEART Return for Season 10?