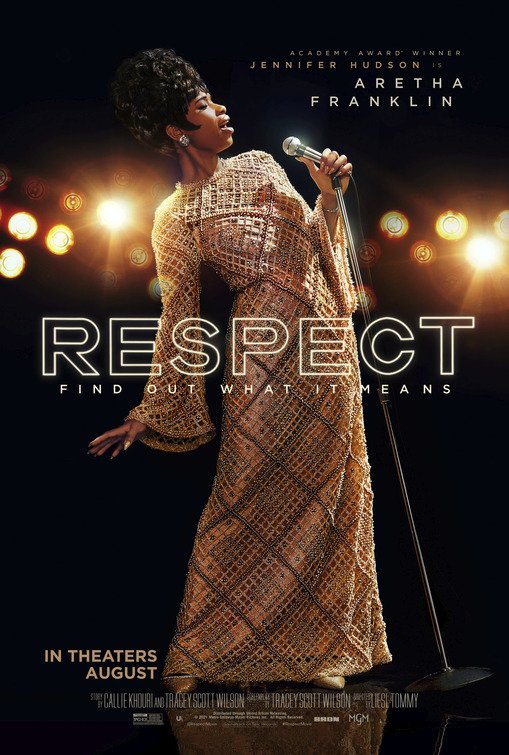 RESPECT tells the life story of singer Aretha Franklin. The movie starts 1952 at her father’s home where he throws large parties and then goes to preach the next day in the largest black church in Detroit. At one party, a man comes into Aretha’s room and rapes her. Later, it’s revealed Aretha has had two children out of wedlock. Eventually, after a stint with Columbia Records, Aretha finds her voice in 1967 while recording for Atlantic Records and at the famous FAME Studios in Muscle Shoals, Alabama. However, her first husband, who was also her manager, was abusive, and Aretha increasingly has problems with alcohol.

RESPECT has some very talented actors. However, the movie tries to cover too much ground, and the direction and sound leave something to be desired. Also, some dysfunctional family scenes and fights are very hard to watch. However, Aretha’s coming back to Jesus prayer and singing in a missionary church are deeply emotional, uplifting and entertaining, and worth the price of admission. MOVIEGUIDE® advises extreme caution for the foul language, abuse and other immoral behavior in RESPECT.

(CC, Ab, PCPC, Co, LLL, VV, SS, NN, AA, D, MM):
Dominant Worldview and Other Worldview Content/Elements:
Strong Christian worldview with a coming back to Jesus finale, but very marred and darkened by family dysfunction, including multiple affairs, spouse beatings, children pawned off on grandparents, and lots of social justice language, including saying that Martin Luther King’s pacifism was hurting the African American identity and causing capitulation, with lots of anti-white comments, as well as one scene that seemed to support communist terrorist Angela Davis, all of which and much more seems to be jettisoned by the end of the movie, but the comments about the Church being an easy place to get sex and other derogatory comments are deeply disturbing, although the Church is also held up at the end as being a refuge and safe place
Foul Language:
Four profanities, and 28 obscenities, as well as name calling such as using the “n” word, whitey, redneck, whore, etc.
Violence:
severe spouse abuse, including causing black eyes, grabbing by neck, pushing, shoving, father slaps girl, father takes out gun to shoot boyfriend, and severe angry threats of violence
Sex:
Man comes into little girl’s room and indicates he’s going to have sex with her, then little girl is pregnant, several bedroom scenes with partial nudity, discussing I’m going to give you the best time you’ve ever had, Aretha really likes sex and is vulnerable and has several children out of wedlock, which she leaves with her grandmother
Nudity:
Upper male nudity, and under the sheet female nudity, female cleavage
Alcohol Use:
Lots of drinking by Aretha and by her pastor father, with intention to get drunk several times
Smoking and/or Drug Use and Abuse:
Lots of smoking but no overt drug use (though, according to biographers, Aretha was introduced to marijuana by her first husband); and,
Miscellaneous Immorality:
Pastor father has driven off his wife and his girlfriends because he abuses them, Aretha’s husband lies continually until she finally calls him a liar, Aretha says some really mean things to her sisters, some jealousy and envy in the family, Diana Washington gets physically violent when she hears Aretha sings at the Village Vanguard because Aretha sings one of her songs, news reports of Martin Luther King’s assassination, racism.

RESPECT tells the life story of singer Aretha Franklin, from her dysfunctional childhood, through her grasping for fame and fortune, up to her prayer of repentance and a celebrated gospel concert in a church. The movie tries to cover too much ground, and the direction as well as the music and sound are not as good as the portrayal of Aretha in the GENIUS series on National Geographic.

The movie starts in Detroit, 1952, at Aretha’s father C. L. Franklin’s very large home where he throws large parties and then goes to preach the next day in the largest black church in Detroit. Aretha’s father wakes Aretha up to come down and sing for the guests. Again, the singing doesn’t compare with the same basic scene in the GENIUS episode.

Aretha’s and her sibling’s estranged mother comes to pick them up when it’s her turn to have custody. The mother is kind and faithful and faith-filled. She tells Aretha that Aretha’s voice is her own and not something people can demand.

Back at another one of her father’s parties with the house full of drunken people, one man comes into Aretha’s bedroom and tells her he’s going to give her the thrill of her life as he locks the door. Later, it’s seen that very young Aretha is pregnant, and even later, that Aretha has had two children out of wedlock.

When Aretha learns her mother has died, she refuses to talk at all, which makes her father violently angry, culminating in his angry words to her at her birthday party. She finds refuge in the kindness of the choir director. To teach her a lesson, her father demands Aretha sings at his church.

When Aretha gets older, she has an eye for the most dashing man at her father’s party. Her father breaks this up by taking her to New York and introducing her to the head of Columbia Records, in a way as if he’s prostituting her. Columbia Records picks her up, and she records several records performing other people’s songs. None of them do well, however. She also sings in dives, including the Village Vanguard, where she angers Diana Washington by singing one of her songs.

People talk about her demons, which is her escape into alcohol. The young man her father hates, named Ted, comes to New York, courts her and becomes her manager, husband and caretaker. Ted is clearly a flim-flam man. He lies to everybody and has a horrible temper.

Aretha is getting nowhere with her music, so Ted gets her out of the Columbia Record contract and teams her up with Jerry Wexler, who sends her down to Muscle Shoals, Alabama. Here, in a part of the world where blacks are still menial laborers, Aretha finds her voice playing with a very hip southern studio orchestra. Ted gets into a fight with the owner of the famed studio and hits out at Aretha at the same time. Aretha’s records start to take off now that she’s found her voice, but her dysfunctional family problems force her into more alcoholism as well as into adultery, divorce and remarriage. We never find out what happens to the son she had with Ted.

After Aretha becomes famous, she moves to a very expensive house in Los Angeles, and extremely drunk, she curses out her whole family, including her talented backup sister singers, who’ve helped her all these years. She continues to get drunk, but, in desperation, at one point prays, during which she sees her mother, comes back to Christ and tells Wexler she wants to do a gospel album. Wexler says nobody buys gospel records. She insists, and they decide to film and record in a Los Angeles church, and that album becomes her biggest selling album ever.

RESPECT has some very talented actors. Jennifer Hudson is a terrific singer, but the sound at the screening didn’t have the depth of the GENIUS series program and sounded too shrill. The singing does improve throughout the movie when she sings “Amazing Grace,” and perhaps the point was to show her character arc from being a copycat singer to finding her own voice in church. The acting too, though, is often on the nose and doesn’t show the range capable by some excellent actors, including Forest Whitaker. Also, trying to tell too much of a story, the movie hits on the same plot poets in different situations again and again. Some of the dysfunctional family scene and fights are very hard to watch.

However, Aretha’s coming back to Jesus prayer and singing in the missionary church are deeply emotional, uplifting and entertaining, and worth the price of admission. MOVIEGUIDE® advises extreme caution for the foul language, abuse and other immoral behavior in RESPECT.